If you've ever brushed against a patch of Urtica dioica – or stinging nettles, as they're also called – you know that those suckers bite. And yet, to exact revenge on the prickly plant is only one good reason to eat them. Another, as more and more foragers, farmers and chefs will tell you, is that stinging nettles are seriously delicious, which is why they're popping up on restaurant menus from British Columbia to Newfoundland.

"The flavour is a lot like spinach," says chef Chris Whittaker of Forage restaurant in Vancouver. "Some say it has a minty quality, as well." Whittaker is serving two nettle dishes at the moment: risotto with puréed nettles, hazelnuts, garlic, shallots and olive oil, as well as a cavatelli made from dough containing dehydrated nettles that have been ground into a powder, which imparts the subtle flavour of the weed along with its bright green hue.

For any chef cooking with the plant, the first step is getting rid of the sting. Nettles are covered in hollow hairs called trichomes, which have rounded tips that snap off at the slightest touch, creating a point that has roughly the same shape and sharpness as a hypodermic needle. When those hairs come in contact with skin, they inject a mix of chemicals into it, including a histamine, producing an unpleasant sensation. "The very first ones of the season are pretty strong," Whittaker notes. They're also the most tender, and his favourite to cook with. "We blanch them for 30 seconds, then plunge them into ice water to neutralize the [stinging acid]."

Forager Tyler Gray of Mikuni Wild Harvest goes another route, steaming nettles before he cooks them. "Then I sauté them with garlic, butter, shallots and a dash of white-wine vinegar or lemon juice. I've also tossed them into smoothies and used them in place of spinach in soups. They add so much depth and they're chock-full of nutrients." (Nettles are higher in protein than most greens and have three times more fibre and calcium than kale.) Gray, who hunts for nettles and other wild foods in the Pacific Northwest, says the weeds are easy to find all across North America: "They grow along streams, riverbeds and roads. Look for them in disturbed areas rather than in the middle of the forest."

Before you hit the dirt, Gray recommends donning gloves and long sleeves for protection, unless you're the type who likes to get stung on purpose. "Some people actually find it invigorating," he says.

At the other end of the spectrum are those who would rather leave nettle-wrangling to professionals. Farmers in Vancouver have been selling nettles from their market stalls for over a month now; eastern cities like Toronto and Montreal had a harsher winter and a later start. "We're a few weeks behind last year," confirms Mark Trealout, who sells fresh nettles and other produce at Toronto's Evergreen Brick Works Farmers' Market.

If you miss the harvest, you can still find dried nettles at health-food stores year-round. Or you can seek out a table at the Fogo Island Inn, where Newfoundland chef Murray McDonald uses fresh and preserved versions of the supergreen in a dish called the Stinging Root Cellar, which includes Fogo Island nettle, root vegetables, goat yogurt and island pickles. Or hit up a specialty cheese shop like Global Cheese in Toronto's Kensington Market for Cornish Yarg, a nettle-wrapped cow's milk blend from Southern England. (It won a gold at the International Cheese Awards last year.) The edible nettle rind lends the young, lemony cheese a subtle mushroomy taste. Tracking down a round of it might take some time, but as with any seasonal delicacy, the hunt is part of the pleasure.

You can keep your ramps and fiddleheads. Why this season’s vegetable ‘bounty’ is overrated
May 29, 2015 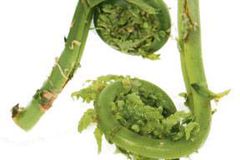