Haldi doodh literally means "turmeric milk" in Hindi. It is an infusion of the ground root with ginger, cinnamon, cardamom, black pepper, and sugar, plus possibly ghee or coconut oil, boiled in milk. Like masala chai, it can be dulcet or rousing depending on the maker. I don't know when I first learned of the drink, but I do know the knowledge came to me through my mother, who called it by its other name, golden milk.

Like an aunty who buttons cardigans over her sari, turmeric is both cliché and practice in the contemporary South Asian household, equally entrenched in our celebrations as it is in our quotidian routines. My friends have been slathered with pastes of turmeric, rose water and sandalwood to prepare for their weddings. I've applied a mask of haldi, honey and yogurt to revive sallow winter skin.

A few weeks ago, in The New York Times, Tejal Rao spoke of brewing haldi doodh with black tea as part of her morning ritual. Her Kenyan-Indian family administers it as a drink to relieve headaches, anxiety and sleeplessness, or applied in the form of a poultice to speed healing of a cut or bruise – a practice familiar to countless South Asians, including me.

So now, when the prevailing food culture is quaffing golden milk enthusiastically, I should be cheering that fresh turmeric is in the grocery store and not just the specialty one. Instead, there is a nagging discomfort at the parcelling out of my culture to select, acceptable portions.

Last spring, The Guardian decreed the turmeric latte – a foamed version of haldi doodh – the sip of 2016, citing trend reports based on Google search frequency. Huffington Post India compiled the reaction of South Asians bemused by the supposed newness of the discovery and Mic followed with an in-depth explainer.

At least those pieces touched on its Ayurvedic origins. More recently, Jean Godfrey-June of GOOP chose to present her ginger and turmeric latte removed from its thousands-of-years-old provenance, but with promises of a luminous glow. Bon Appétit advertised their Moon Milk (golden milk renamed with the addition of nutmeg and ashwaganda, another Ayurvedic powerhouse) as the ultimate soother.

When my relatives make golden milk, it is charming but largely dismissed, or reduced to exoticism, complete with sitar soundtrack. When GOOP's beauty director makes it, it's heralded as revolutionary.

When I was growing up, my family didn't eat Indian food every single night. Yet, I knew the rattling tin of saunf (fennel seeds, often candied) offered after dinner was for digestion, and that certain foods could warm a disposition and others could cool it. I was taught what we ate worked in the body as more than fuel.

As a first-generation Canadian teen, I gave it little thought. Instead, I bought cafeteria bagels the texture of cotton wool and quietly wished for lighter eyes.

At the same time, I accepted the jokes that nobody but Indians liked Indian food. I bore it when people complained that the scent of our cooking lingered in the air or was the cause of notorious digestive unrest. (They didn't have any saunf, I guess.) I was accustomed to where our food fit in, which is to say, not at all.

The current breathless reverence of the turmeric trend ignores a simple, but important, banality: We've been doing this for generations, above and beyond fashion and not linked to some ephemeral mysticism. This so-called discovery is a framing that excludes the persevering vitality of the culture, one that is the thriving chronicle of its past and still relevant to its present.

South Asians are wholly scrubbed from the narrative as our culinary heritage is claimed and rebranded for popular consumption. It's not culinary fusion or evolution, but the repackaging of unique traditions. Too often, the value of a dish is determined by the colour of the hands preparing it, or consuming it.

So no matter how many brown folks assert that saying "naan bread" or "chai tea" is repetitive and incorrect (or point out, once again, that not all of our chai is spiced), there is an expectation that we, too, will eventually order turmeric lattes and abandon haldi doodh.

It's an expectation that proves that while you and I may be sipping the same drink, we're not at the same table.

Instagram friendly: How social media influences the look of a restaurant
January 25, 2017 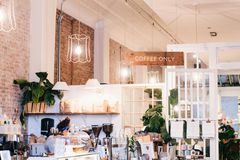