On the edge of the Bay of Biscay, deep in the heart of Spain’s Basque country, two Canadian chefs, a Spanish gourmet-food importer and I are sporting borrowed rubber boots, lab coats and hairnets to scrape tuna loins for preservation. We’re not doing the best job.

“You must clean them very carefully,” scolds the woman from the production line who is instructing us, her own knife moving with swift precision. “Each jar must contain exactly 150 grams,” she explains through a translator.

Our small group, including Bar Isabel’s Grant van Gameren (often cited as one of Canada’s leading interpreters of Spanish cooking), Maison Publique’s Derek Dammann (acclaimed for his charcuterie expertise) and Serrano Imports CEO Michael Tkaczuk, is eating and working its way across Spain in search of the country’s best preserved foods. 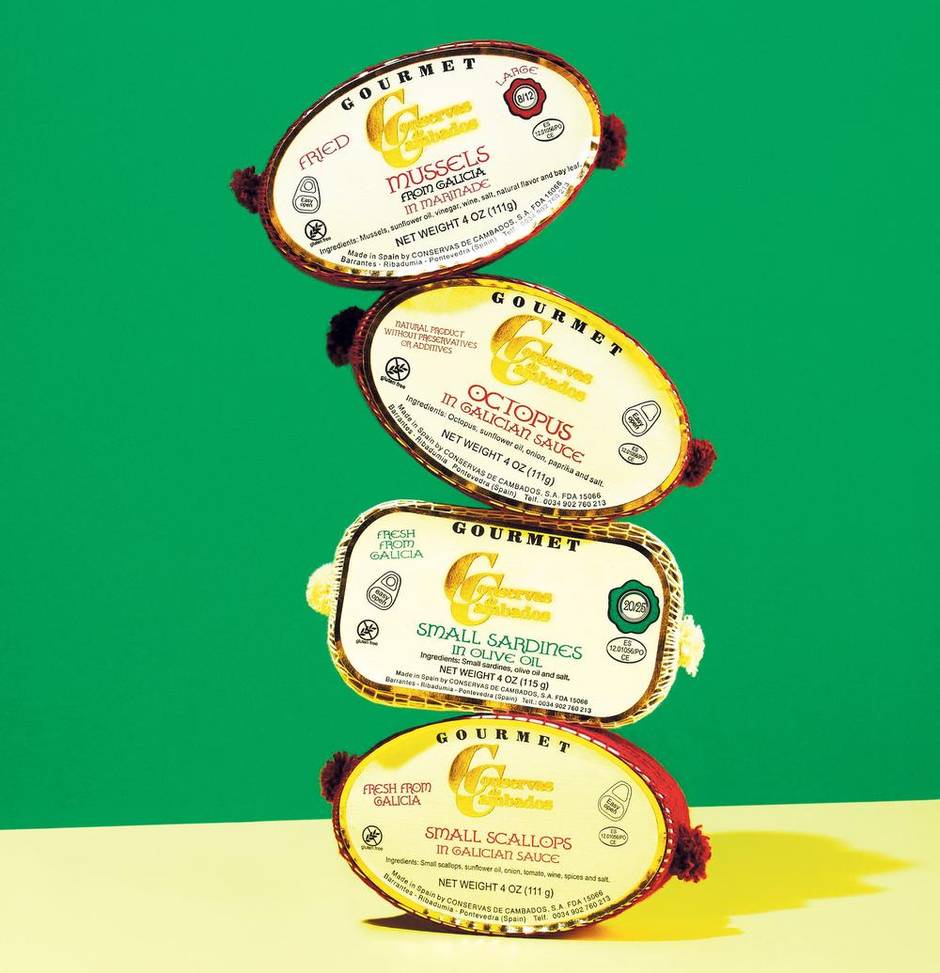 Photos by Joseph Saraceno for The Globe and Mail

Tkaczuk already imports some of Spain’s finest cured meats – including the specialty hams known as Jamon Iberico – as well as stone-milled barrel-aged paprika and the famous piquillo peppers from Navarra that chefs adore. Now he wants to expand his product line to include conservas, the canned and preserved seafoods that Spain is renowned for.

That’s how we find ourselves getting an immersive lesson in tuna preparation at the Serrats factory. The nearly 125-year-old, family-owned operation is widely considered one of the best producers in the world. Tuna are line caught at the height of the season and cooked with strict timing, then hand-packed and stored in olive oil for months, marinating and mellowing into something very different – but every bit as special – as the freshest product.

As good as conservas can be, however, convincing Canadians that a jar of tuna or a tin of anchovies is worth $15 – and much more for other products – is going to be tricky. Over dinner one night at Quimet y Quimet in Barcelona – the meal included tins of whole scallops, small sandwiches topped with boquerones (marinated white anchovies) and tapas of smoked salmon draped over Greek yogurt with truffle honey – we mulled over the challenge. 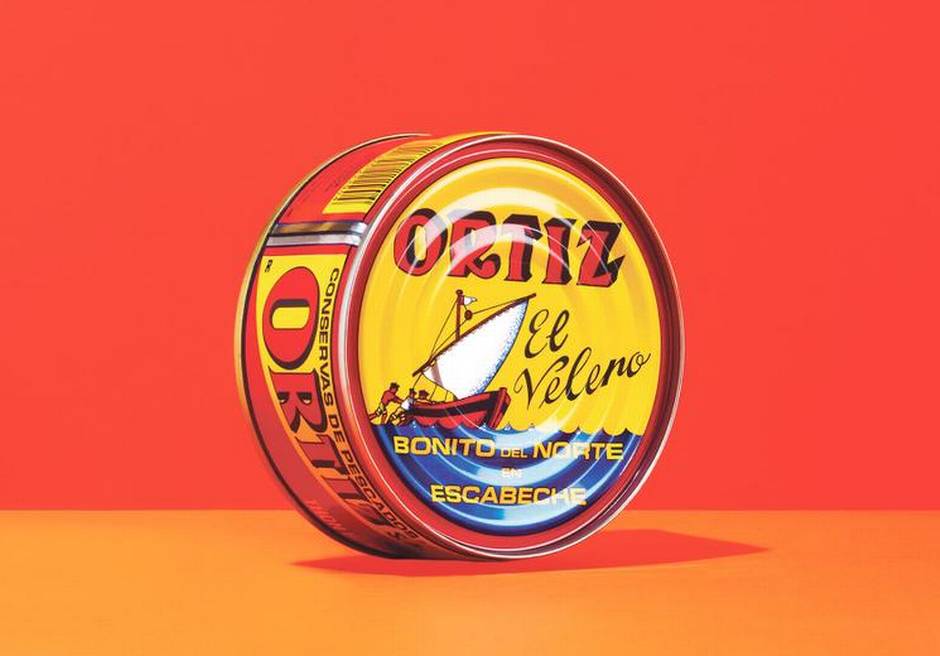 “North Americans look at canned seafood only as a form of preservation, which usually meant the lowest quality,” Tkaczuk adds. “By comparison, Europeans and especially Spaniards have been developing preserves for 150, 200 years. They’re so past the point of preserving just for storage that they’re a delicacy in their own right.”

The Spanish ability to preserve food at the highest culinary level is probably most recognized in North America in the form of ham. Anyone who’s ever enjoyed a slice of 18-month-aged Serrano from a producer like Fuente or had someone carve a ribbon of Iberico de bellota – the ne plus ultra of Spanish charcuterie – directly from a leg knows why these products cost as much as $100 a pound. 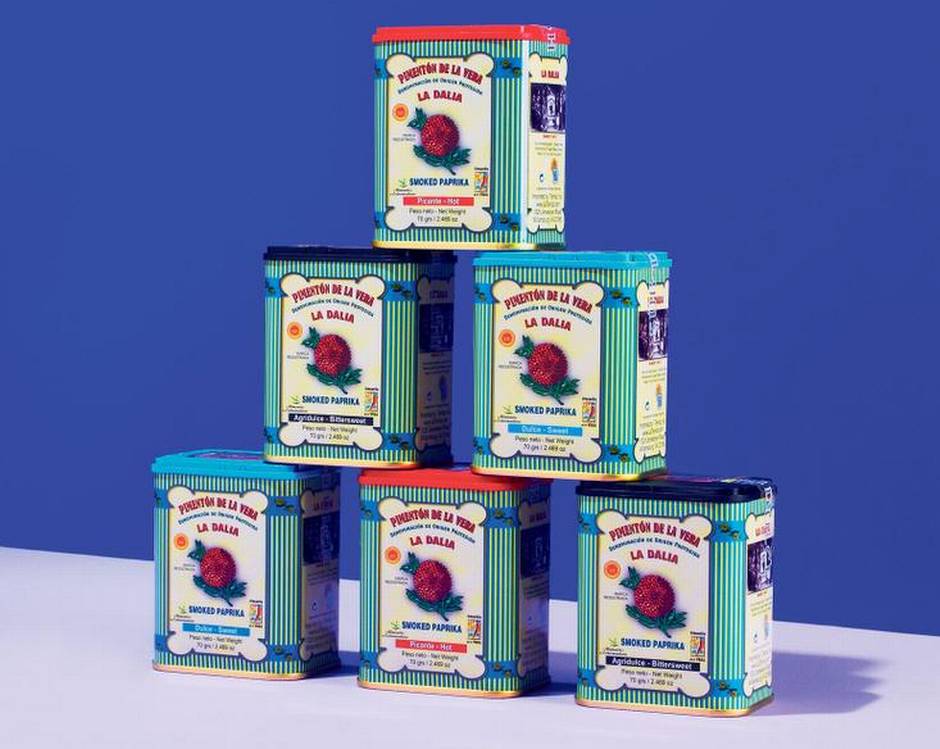 The central place ham occupies in Spanish life was brought home one night while walking down a quiet street in Bilbao. Van Gameren stops dead in his tracks. “Check this out,” he says, pulling out his phone to snap a photo.

“It’s a ham vending machine!” Sure enough, the little wood-fronted machine contained nothing but vacuum-sealed packs of ready-to-eat-slices of Serrano ham. We drop in a few euros and tuck into the salty, savoury slices. “This is incredible,” van Gameren announces. “I need to get one of these for the new restaurant.”

It is not the only inspiration van Gameren will find on this trip for the restaurant he plans to open in Toronto later this year. At Campos De Cambados, in the extreme northwest of the country close to the Portuguese border, we are invited into the company’s tasting room. Over glasses of sharp, crisp albarino, our host, manager Jesus Alfonso, gently peels back the lid from an oval tin of cockles. 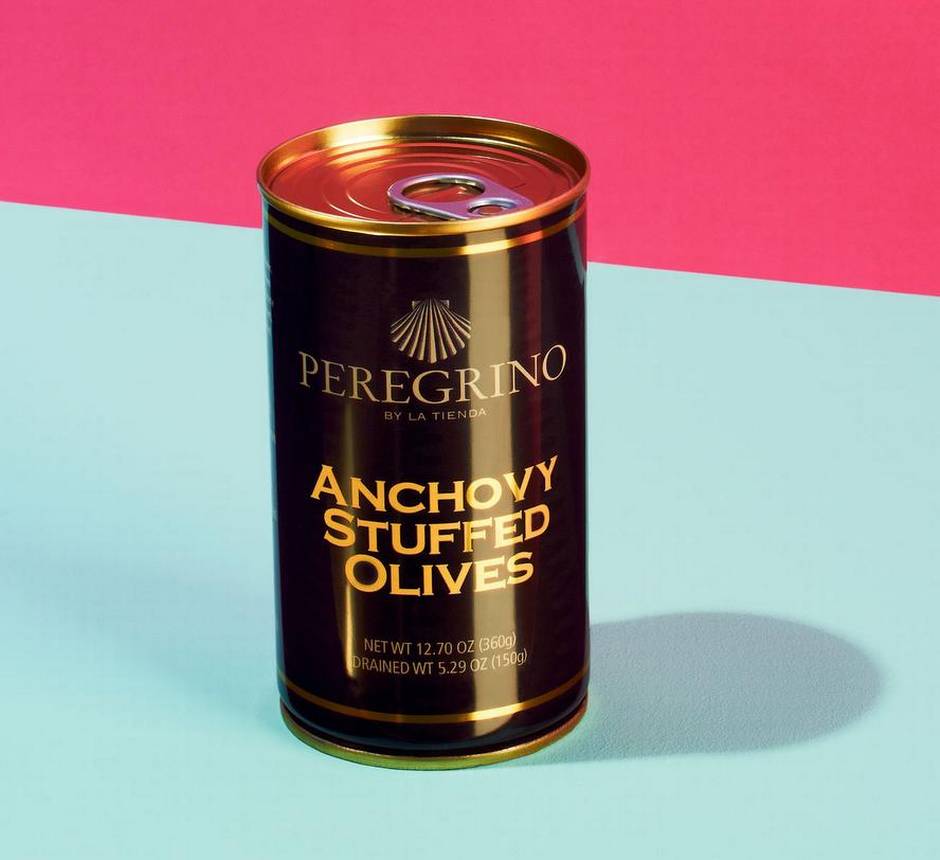 He has reason to be careful. Berberechos, as they are known locally, represent one of the most prized delicacies in Spanish conservas and one tin is worth the equivalent of $30 Canadian.

Inside, the fleshy, golden-tipped bivalves are carefully arranged and tightly packed, resting in a briny liquid.

“I can’t believe how perfectly intact these things are,” van Gameren says. “Have you ever tried getting a cockle out of its shell undamaged like that? I can barely do it myself. It’s a real sign of the attention to detail these guys are putting into these products.”

Firm, plump and tasting brightly of the ocean, the delicious berberechos are about as far removed from what we Canadians typically associate with tinned seafood as Spam is from Serrano. Alfonso tells us that he actually prefers tinned cockles to fresh. 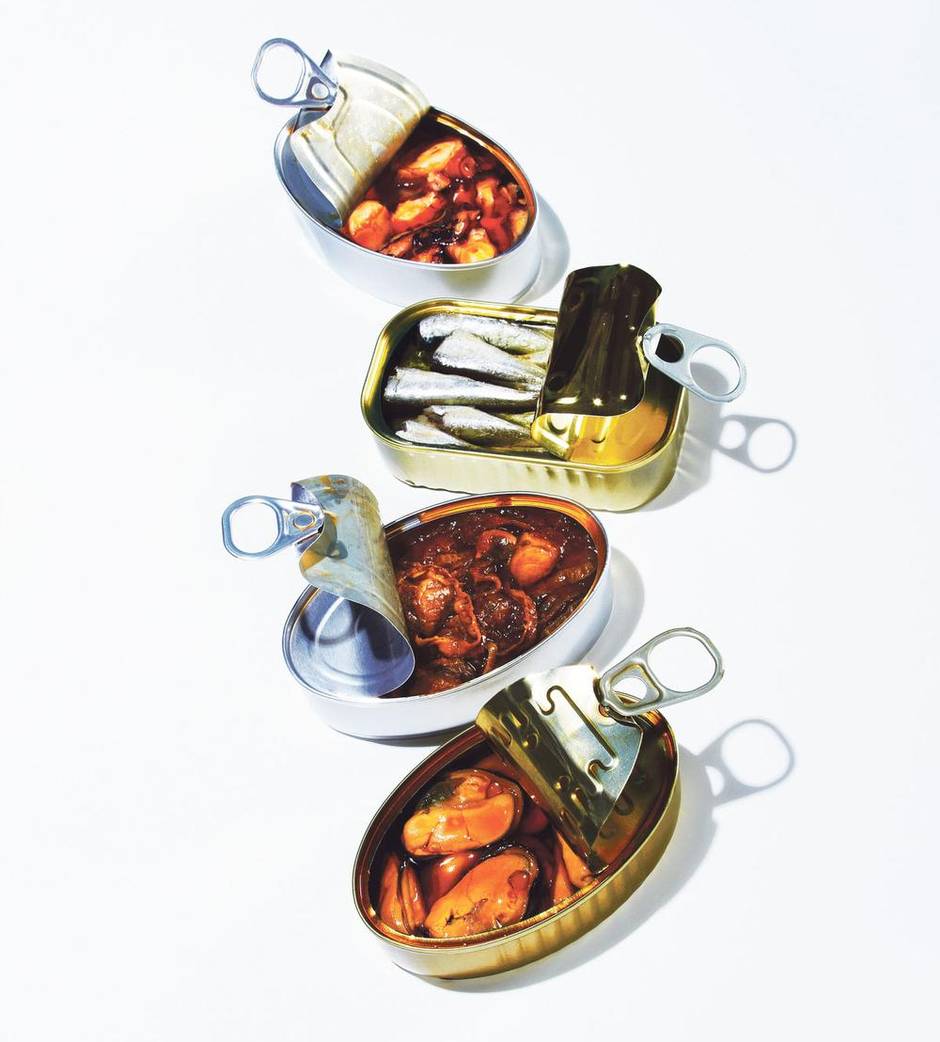 “With fresh berberechos, the sauce provides the flavour,” he says. “But this way you can really appreciate the flavour of the cockle itself.” It’s an excellent point. On their own, cockles have about as much character as a rubber eraser, but in the can they are nuanced and complex.

Recognizing how much our group likes the berberechos, Alfonso sends someone to retrieve several more of the company’s products, each tin wrapped in their signature fishing-net packaging. We devour small squid preserved in olive oil and skewer thick razor clams on plain toothpicks.

“The texture is amazing,” Dammann says between bites. “They’re cooked under pressure and all the way through, so everything’s concentrated in there. You get the pure essence of the shellfish with the liquor.” A few chunks of bread, another glass of wine and several tins later, the tasting easily becomes a meal. 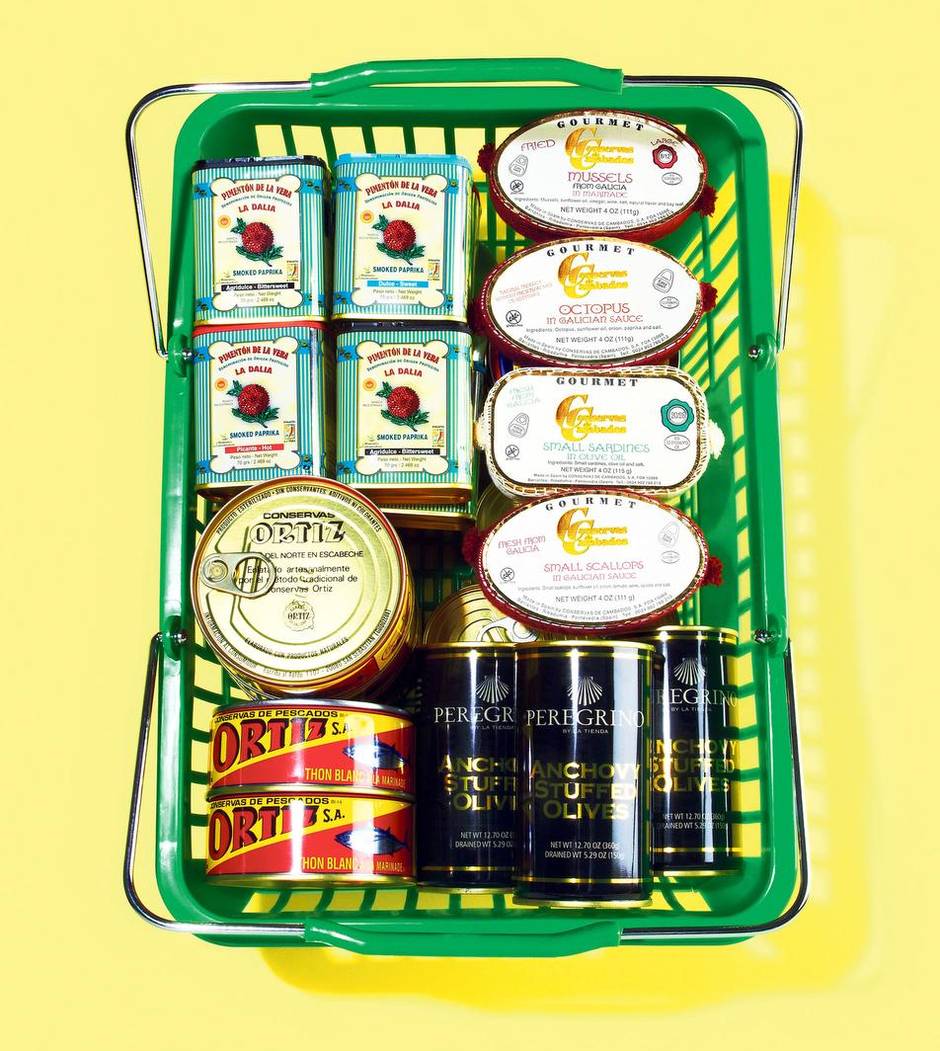 That evening, over dark glasses of oloroso sherry at a café overlooking the Ria de Arosa, Tkaczuk asks the chefs how they might serve some of the conservas we tasted for an audience back home.

“I think it’s best to keep it simple,” Dammann says. “If you want to dress it up, just serve it with some chilies and parsley and some good olive oil, maybe a squeeze of lemon. Otherwise, some nice crusty bread, a few toothpicks and a big plate are all you’ll need.”

“That’s how we’re going to treat them at the new place,” van Gameren concurs. “We’re going to kind of have the option of opening the cans for the table or have a mixed plate with a bit of each can with some pickled beets or something like that. A lot of that stuff is going to be an integral part of the new restaurant. I’ve just got to work on getting one of those damn vending machines now.”

La Tienda provided the smartly packaged foodstuffs in the photos. The Williamsburg, Va.-based grocer stocks Spanish fare from chorizo to paella kits and can ship many non-perishable products to Canadian addresses. For more information, visit www.tienda.com.