There are early and, to some perhaps, ominous signs that the new book from Martin Picard, the star Montreal-based chef and voluptuary, is no ordinary cookbook.

Cabane à Sucre Au Pied de Cochon, as the 386-page volume is called, is devoted to the food, the aesthetic and the bawdy, excess-obsessed ethos behind the maple syrup-soaked sugar shack that Mr. Picard opens in the countryside near Montreal for spring, to coincide with the running of the sap.

In the introduction, Mr. Picard writes that it took 400 litres of syrup to test the cookbook's recipes. One of the first ones is for pancakes deep-fried in duck fat and drowned in maple syrup. There's also recipe for tourtière but topped with sweetbreads, sautéed calf's brain, slab bacon, pecans, 3½ ounces of foie gras, arugula, and half a wheel of soft, washed-rind cow's milk cheese, as well as gouts of maple syrup. (The arugula was doubtless a momentary lapse.)

Mr. Picard killed, cleaned and ate at least 35 wild starlings in the book's production (Spicy Small Birds with Lemongrass and Thai Basil), plus a whole beaver for the Confederation Beaver recipe, in which the animal is stuffed with its own tail and organs, cooked sous-vide with maple syrup and duck fat, then doused with a cognac, cream and pork blood sauce. The beaver recipe runs over six pages with exhaustive butchery instructions and 44 step-by-step colour pictures. Mr. Picard also put an untold number of bright-eyed, bushy-tailed Sciurus carolinensis to work in his squirrel sushi.

Yet this isn't stunt cooking or a ironic postmodern art project. Mr. Picard and his collaborators printed 40,000 copies in advance of the volume's release this week. If history is any guide, they will almost certainly need to do a second printing before long. The cookbook from Restaurant Au Pied de Cochon, Mr. Picard's original place on Montreal's Duluth Avenue East, has sold an estimated 50,000 copies since its publication in 2006. ( Cabane à Sucre Au Pied de Cochon is available for $70 on the cabane à sucre's website, as well as at better bookstores.)

The Au Pied de Cochon brand isn't merely a Québécois, or even Canadian, phenomenon. In the decade since Mr. Picard opened the original restaurant, with its foie gras poutine with foie gras gravy, and its now-iconic dish of duck breast, foie gras and cabbage cooked in a soup can, the chef and the style he created have found ardent fans and imitators around the globe.

As Anthony Bourdain, the television chef and author, wrote in the first Au Pied de Cochon cookbook, "Martin Picard's particular genius – beyond having the impeccable sense and timing to realize that now, right now, is the perfect time to give the whole world of fine dining the middle finger – is that he knows who he is, what he loves to eat, where he comes from, what's good, and how best to prepare it so as to most effectively allow others to discover what was good about it all along."

The cabane à sucre, launched in the spring of 2009, is a fully operational maple-syrup camp with 4,000 taps and a massive wood-fired évaporateur that belches clouds of syrupy steam. The timber-beamed dining hall is unshakably fun, loud and friendly, and the servers set jugs of warm, maple syrup on the tables, which local diners pour in torrents over their food. In other words, it's a classic Québécois sugar shack, but with cooking from a four-star kitchen crew. Writing for enRoute magazine in 2009, I called it one of the best new restaurants in Canada.

Mr. Picard's genius lies in his reinvention of Quebec's most beloved foods. Of more than 200 cabanes à sucre around the province, his is the only one that is run by a known chef. Bon Appétit magazine ran an adoring 10-page spread about the place in its January issue. Reservations for the sugar shack's entire run this year, which started last week and extends through early May, took just 12 hours to fill up last Dec. 1.

"I think I am very respectful for the tradition, but I wish also in another way that some chefs will buy some sugar shacks," Mr. Picard said, speaking slowly in English, his second language. "That's going to help for the research and to develop the new recipes."

Underlying the restaurant's bad-boy attitude, there is rigorous attention to detail and technique at work, which are amply reflected in the book.

Amid the photographs showing Gabrielle Rivard-Hiller, the (not at all unattractive) pastry chef, bathing in a tub of maple syrup and pouring a jug of maple syrup down the front of her white T-shirt, is a hyper-detailed chapter on the process, biology and chemistry of converting maple water to maple syrup, written by two maple sugar biologists. "That was very important for us, to make sure that people who come from Japan or Texas … have everything under their eyes to understand what is maple syrup," Mr. Picard said.

The 100-odd recipes, which run from simple, make-at-home delicacies such as soft maple-sugar candy to directions for grilling a whole pig, were all tested at least seven times, Mr. Picard said. Though many of the recipes are difficult, he wanted to be certain that anybody could make them. The book includes more than 2,000 step-by-step photos, as well as volume and weight measures for every dish.

As might be expected, there is also plenty of Au Pied de Cochon-style audacity. Seemingly out of nowhere, the back of the book features an illustrated children's story about a group of starving pigs that gorge themselves on maple sap before being eaten. And in what might be the oddest editorial choice ever for a cookbook, there's also a post-apocalyptic novella, written by Mr. Picard's best friend, painter Marc Séguin. The story, called The Last Sugaring Off, is set in the year after a mutation of diabetes, called "the sugar pandemic," kills off the world's population. The novella is told in the voice the lone survivor, a notably sex-starved young woman who lives at the sugar shack. The plot centres around her efforts to eat herself to death.

Mr. Picard and his colleagues self-published the book, as they did their first one. "We tried to speak with publishers, but it's probably kind of hard for them to do what we want to do," he said.

With his first cookbook in 2006, Mr. Picard set himself at the rough, leading edge of food publishing. That book, which featured a photo of the restaurant's kitchen crew in their underwear in a meat locker and drawings of smiling, drunken pigs missing whole hams, was not only highly original, but by all appearances commercially unviable.

Its success did not go unnoticed.

Other chefs have since followed in a similarly irreverent vein, from David Chang of New York's Momofuku chain, whose first cookbook is larded with curses and hilarious stories, to David McMillan and Frédéric Morin of Montreal's Joe Beef, whose cookbook last year included items on making absinthe on a homemade (and entirely theoretical, of course) pot still. In spite of its unconventional nature, the Joe Beef book won international nods as the best cookbook of 2011.

Still, no one does them better – or weirder – than Mr. Picard.

His intention with the book, as with his cooking, is not to shock people, he said, but to celebrate what is good, without restraints – even squirrel and beaver.

"Beaver is a very specific taste, and when it's young, it's good because it's not too strong," Mr. Picard said. "You can have some where it's almost not good, when it's too strong. Also, it's weird, but it all depends on the kind of tree he's been eating. Some tree gives a better taste than another. But when he's small, you know, that gives a good taste.

And what about squirrel sushi, I asked him. How does that taste? 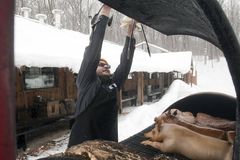 Head to Quebec for a gourmet sugar-shack feast
April 30, 2018 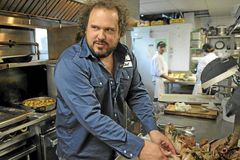 Land a coveted table at Quebec's gourmet sugar shack
May 2, 2018 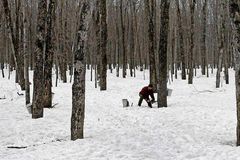