For the great French chef Daniel Boulud, whose NYC-based 15-restaurant empire spans 10 cities and three continents, Canada has so far proved to be a mixed bag.

On the one hand, Maison Boulud at The Ritz-Carlton, Montreal is thriving, and so is dbar at the Four Seasons, Toronto. On the other are disappointments that include the failure of his Vancouver restaurants in 2011, Toronto’s cool reception to Café Boulud and – more presently – my vegetable drawer.

“No fresh rosemary? Really?” Boulud asked, peering into my fridge, incredulous. “Ça va. We use something else.”

My embarrassment was surpassed only by my gratitude that Boulud did not acquire his Michelin stars (two at his Upper East Side flagship, Daniel) and other honours (Chevalier of the Légion d’Honneur, Lifetime Achievement Award from World’s 50 Best Restaurants, etc.) in the uncouth manner of his British contemporaries, such as Marco Pierre White and Gordon Ramsay. He is assertively not the abusive, swearing type. Instead he is calm, composed, surprisingly modest and a study in Gallic charm.

Boulud was at my house to discuss the Toronto edition of Café Boulud, and walk me through its evolving food concept the best way possible: By cooking some of his upcoming dishes-in-progress in my home kitchen.

“You are here to work, yes?” he inquired, handing me a horseradish root and a microplane. “You want to peel me a little bit of that and shave it? Just a little – I’m not going to use much.”

If you assume that this sort of one-on-one personal time is a little above and beyond Boulud’s customary media offensive for a two-year-old restaurant, you would be correct. But he has big plans afoot. The future of what should be an important restaurant is at stake. 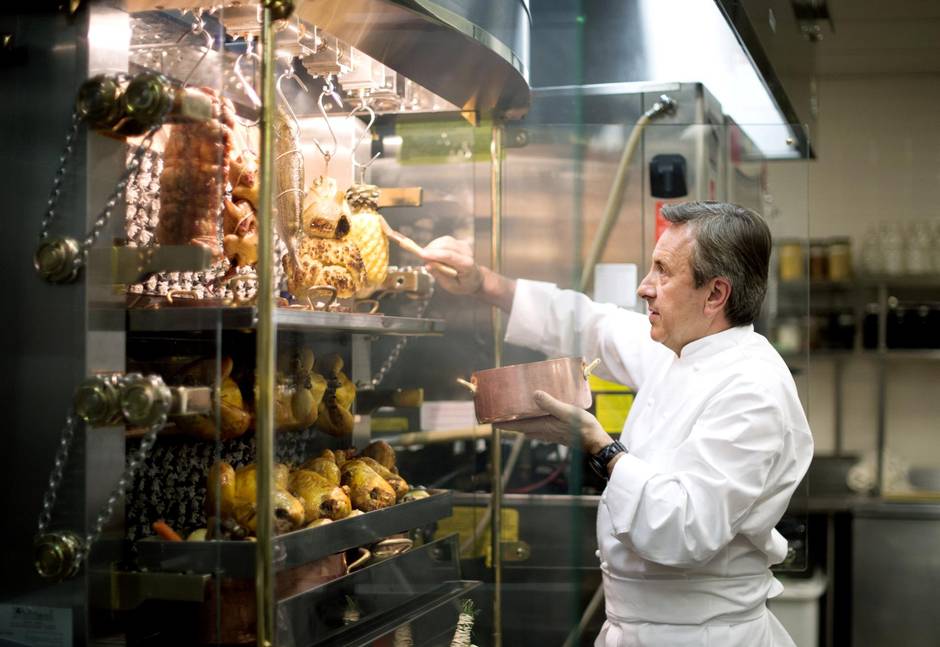 Daniel Boulud had a Rotisol rotisserie machine installed at Café Boulud to make items such as caramelized pineapples. (Photos by Darren Calabrese for The Globe and Mail)

To backtrack, Café Boulud was poorly received by Toronto’s critics. Some protested – fairly – that Four Seasons chairman Issy Sharp’s wife Rosalie Wise Sharp’s cold, modern design was soulless and generic. Its pop-art paintings had at most two fans (the person who chose to hang them and whoever painted them). But that design was already largely in place when Boulud signed to fill it. It was the criticism levelled at Boulud and his food program that was nonsensical in its collective message. One critic – at The National Post – claimed rather implausibly that a meal she was served at Café Boulud was the worst she had been served all year. Others said the place served food that was too French and rich – or not French enough. It was also too local and too trendy. It was not formal enough – while at $38 for three courses, the prix fixe was too expensive.

A year ago, restaurant industry rumours had the place imminently closing, with the chef beating a disgruntled retreat to NYC. More recently, there was talk of renovation and relaunch. The reality is the latter and there is beauty in the details.

Café Boulud will close immediately after brunch service on June 28. It will reopen a little more than two months later – according to the schedule, just in time for the Toronto International Film Festival – with an unrecognizable, new $2-million design and build out.

Boulud and the Four Seasons have hired Martin Brudnizki, one of the genuinely great restaurant designers working today. In London, he is responsible for my favourite oyster bar, J Sheekey, as well as such institutions as Le Caprice and The Ivy. Stateside, he designed the beautiful Soho Beach House in Miami, as well as its restaurant, Cecconi’s. Café Boulud is his second Canadian assignment – after Jeff Stober’s Drake 150.

“I was told to start again,” Brudnizki explained of his design mandate for Café Boulud, over his cellphone from New York.

Expect Brudnizki’s signature confluence of warm, textured surfaces and finishes: armchairs finished with luxuriantly crumpled leather, timber, marble and Hermès wallpaper. And more significantly, a lounge at the front of the room, and a bar and dining counter running a good part of its length.

“There will be lots of social seating, places to be seen – and places to hide out,” Brudnizki says.

The more comfortable setting will be reflected in a menu boasting more recognizably French cookery of the most approachable sort. It features even a section of rotisserie and grillades – for last week, a Rotisol Olympia, the La Cornue of rotisseries, was installed in the Café Boulud kitchen. 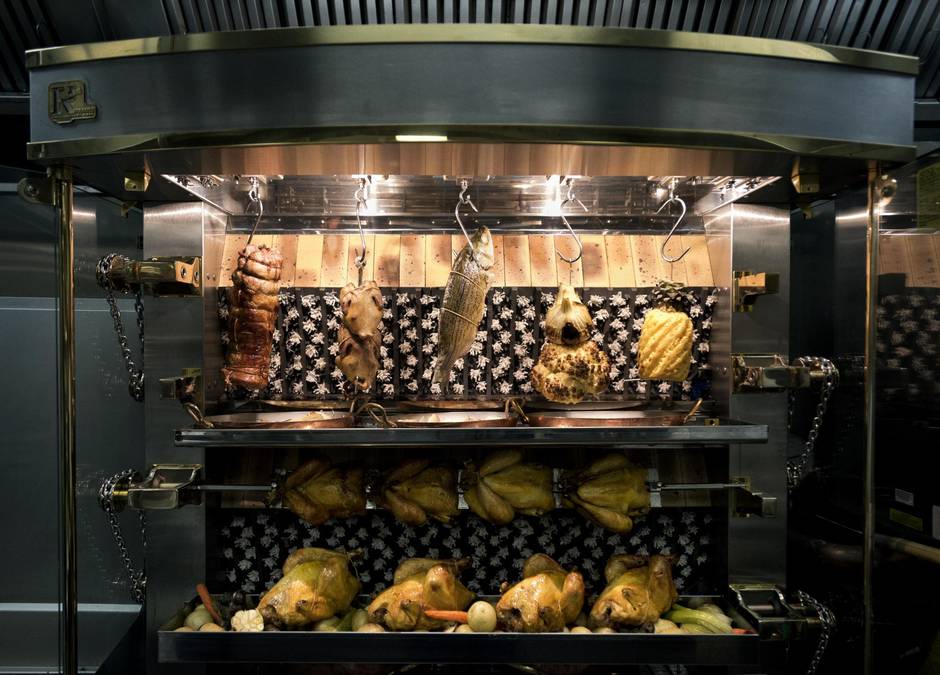 Chicken, veal, striped bass and a pineapple cook in a  Rotisol rotisserie machine at Cafe Boulud.

I witnessed its initial run. On its vertical spit, a plump, whole pineapple, gently caramelized as it turned. Alongside, Chantecler chickens, a veal loin and several squab turned on the horizontal spit, their fat and other hot juices collectively dripping onto the vegetables snugly nestled in the roasting tray that fits beneath.

The aromas brought me swiftly back to France – and the last, great meal of poulet à la broche I enjoyed there, at a surprisingly casual Michelin three star in Monte Carlo belonging to Joël Robuchon (who incidentally in the spring of 2016 will be joining Boulud in Montreal, with a new branch of L’Atelier Joël Robuchon at the Casino). The skin was golden and crisp, the slowly roasted flesh moist and supple, the jus a simple pure reduction. The flavour was clean, unadulterated poulet de Bresse – pure chicken perfection.

The food Boulud has in mind – and that his newly appointed, Montpellier-raised chef Sylvain Assié is charged with executing – is almost entirely French in its reference points, but completely modern in its sensibilities. If you know French food well, many dishes will remind you of the classics – but usually in a keenly contemporary culinary vernacular. You may need to think about it. Take for example Boulud’s new appetizer to showcase Canadian salmon.

“I like the taste of raw salmon, of sashimi – but I don’t want to make a tartare,” Boulud explained as he arranged some of the mise en place he had brought over. “And I like the taste of cooked salmon, which definitely has a little bit more texture.”

And thus he arrived at using both, in a newfangled chaud-froid de saumon. In the traditional dish, chaud-froid signifies a hot dish served cold (or at room temperature), invariably glazed with its reduced, cream-enhanced cooking liquid.

Boulud instead dresses a plate with a pastiche of the raw and pickled cucumber and radish, pickled shallots I had sliced up, along with chervil, dill and minced chive. One thin rectangle of raw salmon gets sprinkled with toasted pumpernickel crumbs, a lightly poached piece is placed on top and the two are glazed with horseradish-spiked crème fraiche. A scatter of tiny cubes of gelatinized pickling liquid and a pinch of espelette pepper completed the mix.

Indeed: a recognizable nod to the past that is also light and fresh. The small portion of fish packed all the textural variety of salmon sashimi and poached salmon in one small bite – with a little crunch of pumpernickel besides. The scattering of vegetables and herbs brightened the picture, and the acidity and spice was judged just so – just enough to leave the palate yearning for more, not so much as to interfere with the fine white Burgundy we were drinking.

He then turned next to another classic: blanquette de veau. Just about every French cookbook on my shelves has a take – even my 1865 edition of The Modern Cook by Charles Elmé Francatelli. And while his method differs from, say, the one Robuchon published 120 years later, the end result is essentially the same: un-browned, cooked veal gets folded into white veal stock thickened and enriched with egg yolks and heavy cream.

But not with Boulud: he creates his sauce by blending poaching liquid with chervil, parsley, spring peas until smooth, with a hint of mashed potato and soft-boiled egg added in for body. Then he plates the vividly green-sauced veal on a sauté of spring peas, snow peas and turned zucchini – with a pinch of fresh rosemary, if he has some. To finish, dabs of lemon-spiked crème-fraiche. I had never tasted a more delicate, summer-attuned stew. “What could be more banal and commonplace than a blanquette? ” he asked. “But when you do it with truffles and wild mushrooms like I’m going to do in the fall … ” 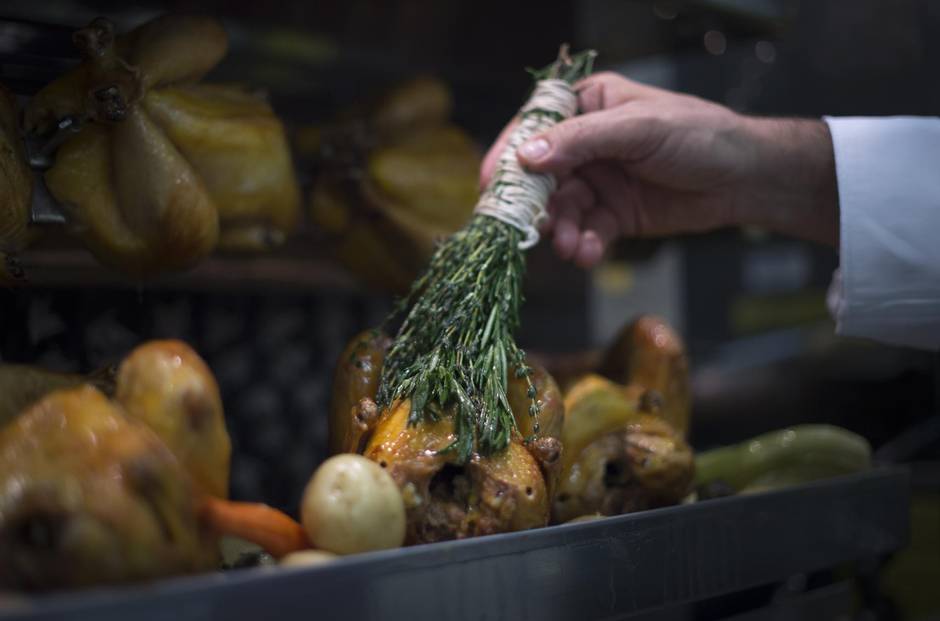 Well, then it will be more indisputably French. And that is the only caveat to this venture. That the main reason that Maison Boulud has been so much better received than Café Boulud was that Montreal is 400 years into its love affair with French food, while Toronto’s hasn’t yet begun.

“This city’s fascination is with Italian cooking, with Tuscany, Italian romance,” concurs Michael Bonacini, whose company Oliver & Bonacini owns and operates Auberge du Pommier and Biff’s Bistro, two rare examples of restaurants that buck the Italian trend that Franco Prevedello arguably unleashed on the city with Splendido and other restaurants in the early ’90s. The only other place in Toronto that made a long, distinguished run at serious French dining has been The Fifth Grill.

“Young people here want simpler food with sauces that taste big up front, instead of developing slowly, with complexity, like a fine wine,” noted Fifth owner Libell Geddes, speaking of her new simplified concept for the place. “They want plates they can share – which French food isn’t made for. And they want plates they can enjoy without paying much attention, so that they can keep texting under the table.”

Toronto has been a challenge for all the American chefs who have swaggered into town lately: Scott Conant, David Chang, Jonathan Waxman. The general problems are well known. Our fish markets are lousy, menu prices are low, restaurant-goers are fickle, less preoccupied with quality than by the latest thing, and the throngs of big-spending tourists to which these chefs are so happily accustomed to back home are nowhere to be found.

Boulud is well aware of all this, knows what he is up against, and at ease with his odds of success. “Toronto always wants to follow what other cities have,” he points out. “They don’t want to feel like they are missing anything. So French food is never going to have the strength here of Italian or Asian. We have a challenge – but … ”