If it wasn't yet obvious that animal bones contain some of the best flavours on the planet, look no further than a bowl of ramen. In certain areas of Japan, the noodle soup is traditionally built around tonkotsu, a velvety, sheet-white broth distilled from bones. When done right, it's sweet, salty and fatty, a legitimate nectar of the gods if there ever was one.

At Toronto's Ramen Isshin, chefs use the bones of whole chicken carcasses as well as pork femurs, knuckles and skulls: all bones with an abundance of cartilage and gelatin and marrow. They're given a short boil to remove impurities, then scrubbed clean and given a second boil for eight to 12 hours to extract everything good. The result is a broth that's as pure and clean as high-grade sake.

"It's like an art for us," says Jason Matsubara, the restaurant's co-owner. "It took us a long time to figure out how to find that magical flavour."

Tonkotsu is delicious, and if a new North American health fad is to be believed, it's also good for you. According to the New York Post, Forbes and the Washington Post (among others), bone broth is a new miracle food, rich in nutrients and full of anti-aging qualities.

We have a New York takeout spot called Brodo to thank for that. The Manhattan phenomenon serves steaming cups of broth made from slowly simmered beef, chicken or turkey bones for $4 to $8.50 a pop. Lineups are sizable and customers walk away sipping bone broth in a cup like they've just visited Starbucks.

"To me, it's just stock," says Jennifer McLagan, award-winning author of Bones and three other cookbooks. "It sounds nicer to say you're drinking bone broth, but stock is a basic thing in everyone's kitchen. Maybe it's a generation of people who've never had real stock, and they try it and find that it's tasty and delicious."

I've never thought of myself as someone who's forgotten the merits of broth, but taking food out of its natural context (in this case, a bowl) does give a fresh perspective. For the past week, I've been sipping chicken stock out of a coffee mug throughout the day. Five dollars worth of bones has made winter noticeably more enjoyable.

Ciara Foy, a Toronto-based holistic nutritionist, is on board with the bone-broth hype. She says bone broth differs from stock because it's been simmered for a longer period of time, so it contains more nutrients.

"The big thing with bone broth is that it's high in collagen and rich in gelatin and amino acids, so it has the ability to heal your gut," she says. "And when you heal your gut, you increase your immune system and you feel more clear. It can even help with mental illnesses." (The trumpeted health benefits of fad foods are sometimes perhaps overstated.)

Andrey Durbach, a veteran chef and co-owner of several Vancouver restaurants, including The Abbey and La Buca, finds this new-found fascination amusing. It's not only because broth has been around since time immemorial, but also because it's one of the first things a burgeoning chef learns how to make.

"What I find strange is how hipsters appropriate things. They think they've discovered soup!" he says. "People are just discovering now that chicken soup is good? That's weird."

Still, if that type of reclaimed nostalgia introduces more people to the merits of high-quality food, he says, then maybe it's not such a bad thing.

"It's good to look at the positive side," he says. "I think if we lived in a world where people are walking around with coffee cups full of beef broth rather than Starbucks caramel espresso lattes, we'd be a lot better off." 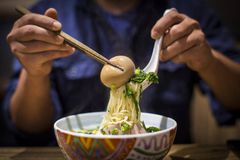 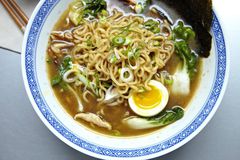 Simple Ramen soup
January 6, 2015
Follow us on Twitter @globefoodwine Opens in a new window
Report an error Editorial code of conduct
Due to technical reasons, we have temporarily removed commenting from our articles. We hope to have this fixed soon. Thank you for your patience. If you are looking to give feedback on our new site, please send it along to feedback@globeandmail.com. If you want to write a letter to the editor, please forward to letters@globeandmail.com.
Comments