Recently, I was struck by a story about a new rave-style party that had started up in Stockholm. Normally, Swedish nightlife isn't something I keep tabs on, but this particular event was intriguing. There was the usual stuff – neon strobe lighting, pulsing dance beats, etc. – but something significant was missing. The party was called Sober – a sizeable clue as to what that missing element might be. Bartenders served near beer and alcohol-free bubbly; bouncers used breathalyzers to ensure house rules were obeyed. Now, I realize there are plenty of activities (most in fact) that go perfectly well without mood-altering inebriates. But sober clubbing? To me the concept sounded counterintuitive, at best – at worst a sort of living nightmare.

Not so for the 900 Swedes, who made opening night a massive success: tickets sold out and there have been copycat parties around the country ever since. It turns out plenty of people are interested in hitting the town without hitting the bottle, and not just in the Nordic nations.

Here in North America, abstaining from drinking, or cutting back, is not just a lifestyle trend, but the source of a burgeoning industry. Over the holidays, Brillig Dry Bar opened in Ann Arbour, Mich., inviting patrons to stay late, get rowdy, listen to live music and do everything else you might do at a bar, aside from the obvious. Similar establishments have popped up over the last year in Chicago and Los Angeles. In Canada, we're still waiting on a dedicated dry bar, but many of the hottest restaurants and hipster bars are offering high-end booze-free beverages, and in some cases a full "mocktail" menu. Meanwhile, the premium near-beer industry is on the rise, proof that even our most beloved national drink is not above a booze-free makeover.

It's a notable shift in a culture that has generally left people who don't drink feeling like vegetarians at a pig roast. Suddenly, sobriety is getting some love – this month especially with tens of thousands of people giving up booze for Dry January. The goal of the Britain-born movement (which is catching on in Canada and the U.S.) is to promote healthy living and encourage participants to reflect on their relationship with alcohol. It's a relationship in flux according to the latest statistics on Canadians and alcohol. On the one hand we still drink a lot – 50 per cent above the global average, according to a study by the Centre for Addiction and Mental Health. Telling, though, is that the same study saw a significant dip in consumption among 15- to 25-year-olds, meaning that along with our memories of a pre-Internet society, our drinking habits are likely to die out with the millennial generation.

Consider the recent rise of the alcohol-free cocktail, once the dorky, tag-along cousin of the real thing, and now a divine option in its own right. In many ways, the mocktail world mirrors the evolution of regular cocktails: It wasn't so long ago that the Sex and the City-inspired Cosmo craze represented the height of libation sophistication. And then slowly, the artisanal, ingredient-focused ethos that has taken over culinary culture found its way behind the bar.

Adrian Stein, who has worked in the Toronto bar and restaurant industry for 20 years, and is known locally as the go-to guy for booze-free bevies, says the secret to a good one is the same as the secret to any good drink – complexity and dimension. "The challenge is building that up without the flavoured liqueurs, but there are ways – I use a lot of alcohol-free bitters in my drinks, a lot of elderflower water."

Three years ago, Stein introduced one of Toronto's first complete mocktail menus at Sopra, the popular Massimo Capri-helmed lounge. More recently, he has crafted 0 per cent-alcohol drinks for Redbull and for the Toronto gourmet grocer Fresh and Wild. Last spring, he created a custom mocktail menu for a War Child fundraiser held at a private home in Oakville where the Muslim host didn't want to serve alcohol. Stein's menu included flowering Faux-hitos (with mint, sparkling pear and elderflower water) and Namasteas (chamomile with saffron and rhubarb bitters on ice). "We had two hundred people drinking mocktails – nobody complained," says Stein, noting that religion is just one the many reasons that some people prefer to skip the sauce. "There is this assumption that everyone loves to go out and get hammered, and that's simply not true."

Ted Fleming has found a similarly broad market for Premium Near Beer, his Toronto-based exporting business that brings in non-alcoholic craft beer from around the globe. Fleming became interested in the industry after a Celiac diagnosis meant his brewsky days were behind him. "The stuff I was able to find in Canada left a lot to be desired," he says, referring to the Becks and O'Dools standards that have perhaps given booze-free beer a bad name. Not that he's a snob about it. Fleming's goal is to offer variety and let his customers make the choice.

Choice seems to be at the core of this temperance renaissance, which is less about moving toward an alcohol-free future and more about giving people who don't drink the same options as the ones who do. To that end, Daybreaker dance parties are set to start up in Toronto later this year. Already popular in the United States, the 6 a.m. "raves" are a way to dance and be social away from the party culture that these events have been associated with. Probably not for everyone, but proof that variety is the spice of sobriety, which is exactly the point.

Fake bar may be key to helping alcoholics
January 5, 2015 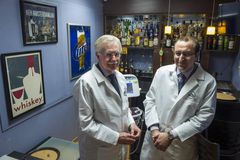 If vodka is just ethanol, is it essentially all the same from brand to brand?
December 24, 2014 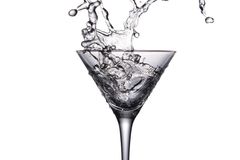