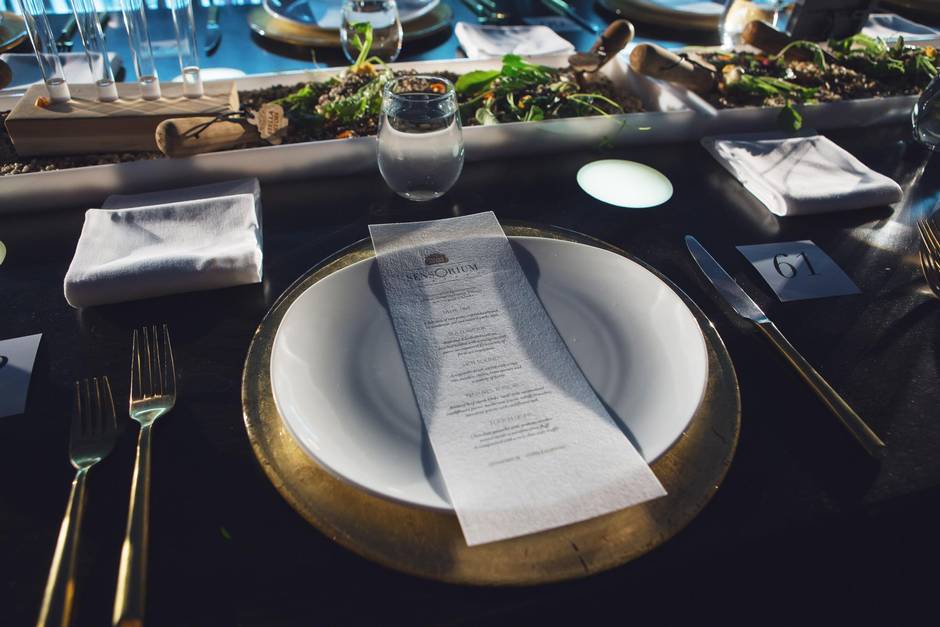 The soup course at Stella Artois Sensorium, the $130-per-person, “immersive multisensory” dinner-in-a-tent series being held on King Street West this month, isn’t like most soup courses. As the bowls arrive, each one is placed into a divot cut into the tables. The soup is murky brown with a tinge of orange, but it’s dark in here, so who knows, really. Its temperature is tepid. It smells like food-court pho.

Hands search for spoons and chopsticks, but none have arrived yet. The room, set with three long tables under an enormous domed ceiling, and filled with 80 lager-buzzed diners, quiets slightly. Isn’t this guy supposed to be a Michelin-starred chef?

Near the kitchen entrance, a cymbal crashes and a spotlight illuminates a drummer. He starts out low on the tom-toms with a rolling, blurring, bouncing jungle beat. As the rhythm builds, cheering and laughter and bewildered hoots descant across the tables. Eighty soup bowls have started shaking in place, the broth inside them jumping in time to the kick drum and tom-toms, trembling with the hi-hat and splashing with every beat of the snare. A few of the diners try to shield themselves with their napkins. Overhead, that domed ceiling dances with thousands of projected water droplets – the ceiling is an enormous, 360-degree video screen. Smiling faces swivel around, from screen to drums to soup to other smiling faces.

So this is what “immersive multisensory” dining means. 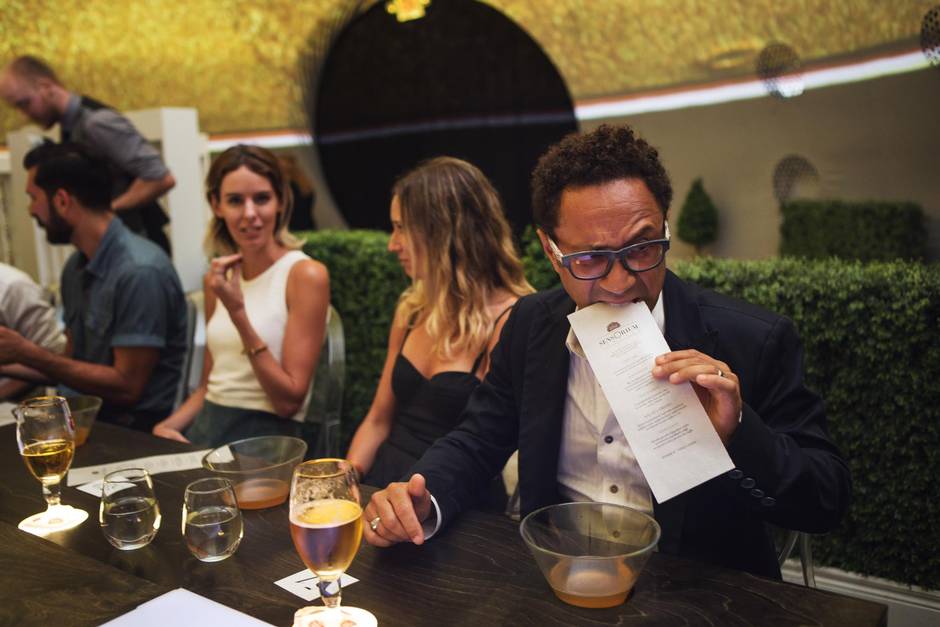 With the help of sound, scent and video designers, as well as the modernist chef Richie Farina, who, until the spring, ran the kitchen at Chicago’s Moto restaurant, the 18-night Sensorium series aims to awe its patrons with a mix of technology and culinary sleight of hand. More than that, it aims to shape and control the single factor that’s uncontrollable in a typical restaurant: its patrons’ mood.

The technology part – the video projections, the speakers built into the tables to bounce that soup, the sound engineering – is a lot of fun, as are a few of the other courses. But once the drumming ends and the cutlery arrives, what’s left is 80 bowls of sad.

Though a program we’re handed calls it “a zesty vegetable broth served with crispy rice noodles, spicy chilies to add heat, bean sprouts and a variety of herbs to emit fresh aromatics,” it is neither spicy nor zesty nor fresh-tasting, and the crispy rice noodles taste spongy and bland. In fairness, it’s the fourth night of the engagement, and Toronto is the first stop on Sensorium’s tour. Mr. Farina’s crew is working not in a proper kitchen, but out of an adjoining tent. Still, you’d think that somebody might have thought of that in advance.

It’s hard to ignore, too, that we’ve each paid $130 – at two seatings of 80 people a night, sold out for weeks now – to sit through two hours of shilling for Stella Artois; it feels like one of those timeshare seminars where you get a free TV or a carpet after you’ve endured the sales pitch. Except that Sensorium’s patrons paid for the privilege and all we get to take home is a branded beer glass – excuse me, all we get to take home is an “iconic” Stella Artois chalice. (It’s a beer glass.)

“Each of you has received a chalice, full of flavour,” Mr. Farina announces at the start of the dinner. “Stella Artois is a crisp lager that can be at the forefront of a tasting experience, or it can play a complementary role,” he says.

The brand-pumping is constant. About that soup, our programs counsel us, “Stella Artois’ mild malt flavour blended with the rice noodles, while extinguishing the heat from the chillies.” Which, that’s a stretch. Budweiser would have had the same effect as that Stella, as would have Molson Canadian, or Labatt Blue. There’s a reason the city and its restaurant culture are turning rapidly away from weak-tasting, mass-market lager, to the taste and distinctiveness of craft beer.

As a server arrives with fresh chalices, my dinner mate announces, “I wonder if there will be a contest for who can drink the most Stella Artois.” He’s half-toasted already. He takes a sip. “Let me tell you, that would be a contest with no winner,” he says. 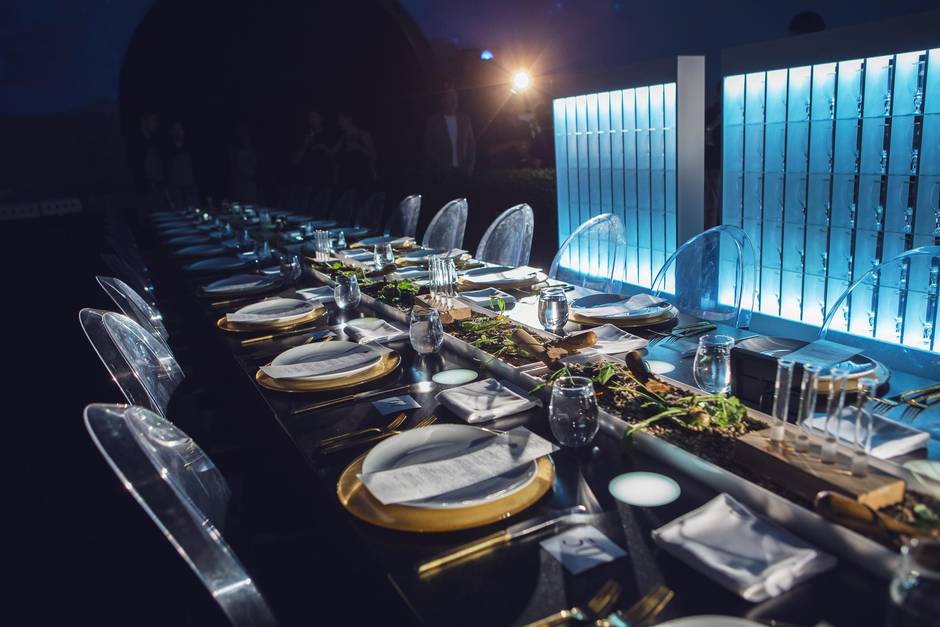 Heston Blumenthal was one of the first to build multisensorial technology into his food presentations. In 2007, the pioneering modernist and chef at the Fat Duck, outside London, introduced a seafood course called the Sounds of the Sea, which was served alongside a conch shell. Ear buds extended from the shells; they played the sound of ocean waves. “Sound can really enhance the sense of taste,” Mr. Blumenthal said at the time.

A few years later, in Shanghai, French chef Paul Pairet built on that concept with a restaurant called Ultraviolet, where the dining room is a plain white box with a plain white table with seating for 10. Those surfaces are white for a reason: Pairet uses them as screens for projecting high-definition video, which he accompanies with sound and music. From the restaurant’s control booth, scents are also piped around the room.

For the chef’s fish and chips course in 2013, the room was ringed in falling “rain” and the table became a Union Jack, while the space filled with the sound of Ob-La-Di, Ob-La-Da; the lobster course was served as if the diners were bobbing in a tide-churned cove, with waves crashing on every wall. Each of Ultraviolet’s 20 courses is served in a different environment. It’s considered one of the world’s best restaurants. It may also inspire the future of restaurants and high-end food.

Sensorium is the first of these that I’ve heard of in North America. Though its execution is flawed, its possibilities seem almost endless. It is dinner theatre for the Information Age. (And to the pop-up’s credit, that $130 is a fraction of what dinner costs at Ultraviolet or the Fat Duck.) Now and then, when it wasn’t bad, the dinner tipped in the direction of magical.

That soup was the third course of the evening. The first, a salad, came in long trays that ran through the centre of each table; until we were told to dig in, it looked like a floral display. The greens sat on golden garden trowels; the soil underneath them was puffed rice and other grains. Mr. Farina had also placed test tubes around the tables, each filled with clear liquid – a drinkable trompe bouche of Greek salad. Servers circled the space, spraying some sort of scent around us from brass atomizers. (It didn’t smell like anything.) Above us, video designer Jamie Webster projected a forest of kaleidoscoping plants that opened and closed like a psychedelic garden. That salad course didn’t begin to “test the limits of sensation,” as the chef had promised in the evening’s build up, but still, it was cool. 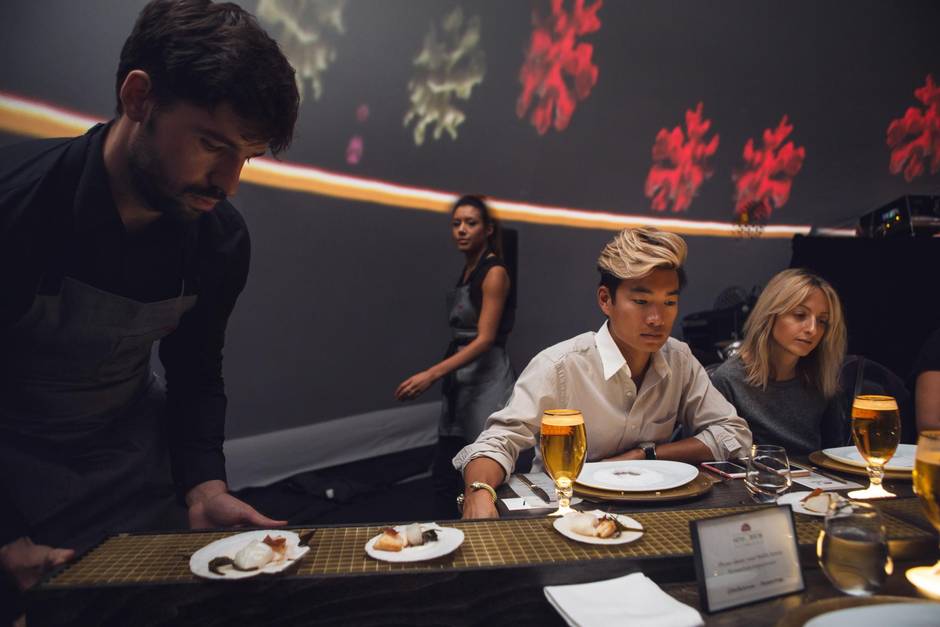 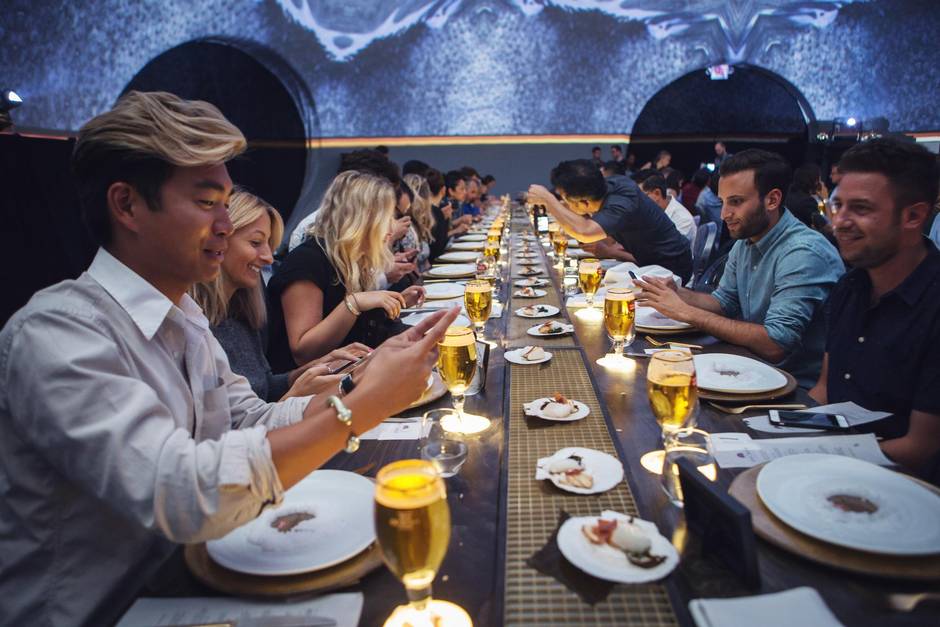 There were a few extras, thanks to a handful of no-shows. “You should have it,” one of our neighbours said to us. She looked like she was starving. “No, you,” I weakly replied. “Oh, go ahead,” she told me. It went on like this for a moment, until my hunger got the better of me. It was either that or try and fill up on the beer. 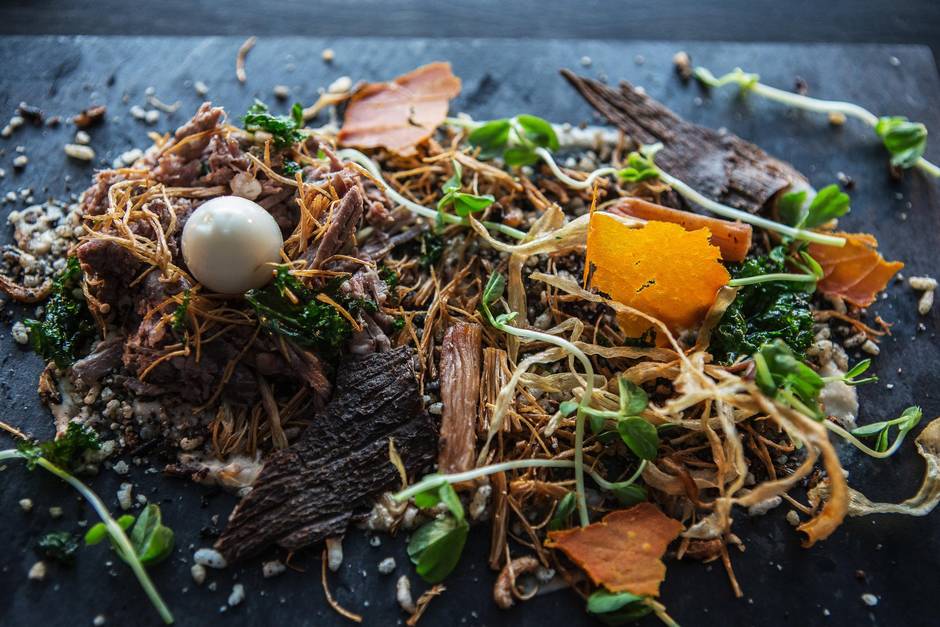 Course four, called “nature’s textures,” was the most inspired presentation: a bird’s nest made from braised, pulled beef cheek, with an egg in the middle, but made out of caramelized cauliflower purée. The nest sat under a glass cloche that had been piped full of hickory smoke.

The presentation was fun; the room filled with a campfire smell; I have no recollection of the sound or the video in that moment because both began to feel extraneous and random. They were background, instead of integral pieces of the experience. Little about it felt immersive enough.

And a presentation that complex is all but impossible to get right for 80 servings at a go. The beef cheek was dry and chewy, which is a crime against cheeks and beef. A woman across from us began chewing on her menu. “Are you Catholic?” she shouted. I couldn’t tell who she was talking to. She kept on chewing. “It tastes exactly like communion wafers!” We joined her. The menus were made from potato starch. This, too, is an old Moto trick.

For dessert, they gave us marshmallows on sticks, as well as chocolate, and poured glasses of Stella Artois’ new cider, which I liked, and flames burst out of the log rounds that had been set out on the tables just before. “What are we supposed to do now?” my wiseacre dinner mate asked.

There’s a maxim in the restaurant business that people won’t remember what they ate and drank or what a room looked like, but they’ll always remember how a restaurant experience made them feel. There are far better dinners in the city for $130, with far better cooking and far better service.

But Sensorium isn’t about the dinner. It isn’t even about beer. It’s about creating a feeling, and against a lot of odds, it worked. As Jamie xx played through the speakers and the ceiling gyrated like an acid trip and the room filled with the smell of roasting marshmallows, every face around us was aglow.