It is so convenient to see egg white as the pantry's problem child. Unlike flour or sugar, an egg white is never entirely predictable. Old whites behave differently than fresh whites (they're easier to whip, generally, but can also be less stable), while cold whites, which often resist foaming, are easier to separate from yolks than warmish ones. Meanwhile, ovalbumin and globulins, the proteins that unfold with whisking to build the bubble walls that make for airy egg foams, collapse and ooze when they're overbeaten. Most home bakers, consequently, stick safely to by-the-numbers crumbles and dump-and-mix brownies.

As for whites' most interesting calling, meringues – the sweet/tart gooseberry messes, the nutty dacquoises, the milky, cumuliform îles flottantes that come bobbing in crème anglaise and drizzled with ribbons of caramel – are often left to the experts or at the very least to foreigners and codgeresses. It's rare to find a modern meringue recipe that doesn't list a half-dozen don'ts and be-sure-tos before it even begins.

From March through August of 1926, Anna Pavlova, the Russian ballerina, toured Australia and New Zealand, performing pièces d'occasion for ecstatic audiences. Pavlova was the world's leading ballerina then. In 1905 in St. Petersburg, she had created the role of the dying swan; she also invented the precursor to the modern pointe shoe. Her tour was considered the cultural event of the year, which it would be in a place like Australia or New Zealand.

The reason all this matters is because during or immediately following that tour, in either Australia or New Zealand (the origins aren't entirely clear), the pavlova, a light, crisp, height-of-harvest-season dessert with a sweet, crunchy, marshmallowy meringue base topped with whipped cream and fresh fruits, was created in her honour. Even today, New Zealanders insist that it was they (and not the Australians) who invented the dessert. The Australians I know don't seem to care.

In any case, the pavlova is the meringue's greatest incarnation, particularly now, when fruit stands are bursting with the season's best.

The other week I found baskets of shiveringly tart gooseberries, blushing white Rainier cherries, intensely sweet, ripe-to-the-edge-of-fermenting yellow plums and five-napkin peaches. What else could I do? I got over my ovalbumin issues and separated some eggs.

A few of the old injunctions are unfounded, as it happens. As I read up on the science behind egg foams in On Food and Cooking, by author and patron saint to kitchen geeks Harold McGee, I learned that fresh, cold eggs are just fine, provided you've got an electric stand mixer. As for keeping your mixing bowl and beaters free from oil, dirt and residual dish soap, which can prevent the whites from foaming, sure it's important, but it's nothing that a quick hot-water wash and towel dry can't fix.

The rest is simple: Beat the whites with a pinch of cream of tartar, an acidic powder used as a baking stabilizer, until they hold soft peaks, then add sugar slowly, incorporating it thoroughly between additions, to a total sugar-to-egg ratio of roughly 2:1. The meringue is ready when it's billowing and glossy and the peaks are stiff enough to put out eyeballs. Afterward, fold in flavourings like vinegar (which also works as a stabilizer) or vanilla, then spoon onto parchment and bake on low heat until the meringues are dry on their outsides and still chewy in the middles (this will take well more than an hour).

There are plenty of variations, naturally. You can heat your egg whites with the sugar beforehand (the way Martha Stewart does, although I don't see much benefit), make little, single-serving pavlova nests, use crème fraîche in place of whipped cream or pile your meringue as high as a top hat before baking it, which some Australians do, but which makes serving and eating them awkward.

At New York's Eleven Madison Park, which is one of the most influential restaurants in North America these days (the chefs there incorporate meringue in at least half of their dessert dishes), they serve miniature pavlovas that are shaped like Hershey's Kisses and dusted with dehydrated basil powder, then stuffed with passion fruit curd and deep-fried basil leaves.

Mine, I kept easy: a disc of meringue as wide and as high as a pie plate, baked to crispy-chewy, the colour of old linen; swirling pirouettes of unsweetened whipped cream; a prodigal cast of stone fruit and sun-ripened berries of the sort that you can gather for only a month or two each year.

And like every other pavlova, the whole of it was built on a simple kitchen trick, on millions of proteins unfolded by beating, bound with heat and sugar into a pale, solid mass that was nearly as light as chiffon.

McGee, the On Food and Cooking author, isn't cowed by egg foams; he even sees magic amid their chemistry. In his book, he likens whipping egg whites to harvesting the air, which is fitting in the case of pavlovas. In a way, that's also what a prima ballerina does. 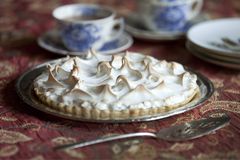 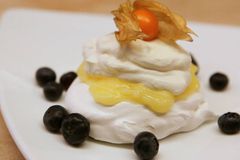 Iced raspberry meringues
July 3, 2012
Follow Chris Nuttall-Smith on Twitter @cnutsmith
Report an error Editorial code of conduct
Due to technical reasons, we have temporarily removed commenting from our articles. We hope to have this fixed soon. Thank you for your patience. If you are looking to give feedback on our new site, please send it along to feedback@globeandmail.com. If you want to write a letter to the editor, please forward to letters@globeandmail.com.
Comments