For years, the city's chicken keepers have dabbled in a pastime of murky legality. In January, city council indefinitely deferred a vote that could have allowed residents to keep "backyard hens." In practical terms, this means that the birds' keepers – who include both Old Country and newly minted local-food fanatics – fly under the radar, unless their neighbours choose to squawk.

On Tuesday, a new documentary/mockumentary, Crackdown (tagline: "Where chickens are outlawed, only outlaws have chickens"), will screen at the University of Toronto, followed by a discussion with panelists that include city councillor Joe Mihevc and an "Anonymous Toronto Chicken Keeper."

The Globe and Mail spoke to one such keeper, a west-end resident who shall remain nameless.

When did you first get your urban hens?

About three years ago, from a farmer near Fergus, Ont., who specializes in heritage breeds. I got an Araucana and a Buff Orpington. Those chickens have since gone on to greener pastures.

What do your neighbours think?

Luckily, my neighbours have always loved the chickens. Partly because I bribe the neighbours with eggs. Mainly because if urban chickens are looked after properly, they have no impact on the neighbours. There's no odour, the noise is minor – they're quieter than dogs. Roosters crow. Hens cluck for five minutes when they lay an egg.

What kind of digs did you supply them with?

I participated in that over-the-top chicken lodging thing in that I bought a coop called an Eglu. When I got one, they wouldn't ship to Canada, so I had to borrow a car and drive to Buffalo. It is impossible to hide a chicken coop in the back of a Volvo station wagon, so I had to declare it and pay duty – and the thing cost close to $600. In future, I would pay a farmer to build a coop. It's crucial in the city to keep them from raccoons, skunks, opossums and foxes.

Would you ever make them small furniture?

Oh sure, if they needed a little ladder up to a tree branch. They're lovely creatures. I would not knit them clothing. But I did a very Martha Stewart thing, I covered their coop in bubble wrap one winter to keep them warmer. I realized we were sisters under the skin when they started puncturing the bubble wrap with their beaks.

What are their food needs?

You can feed them food scraps and get fabulous soil fertilizer out of it. I feed them organic feed that I get from a feed lot in Brampton. It comes in 50-pound bags.

What are the penalties for keeping chickens in the city?

In all of the cases I know of, they give you a written notice, which gives you a couple of days – it varies – to remove the chickens from the city and then tells you that if you don't comply, there's a $300 fine.

I got busted about three years ago for mine and just moved. The bylaw officers didn't come back.

Is there a chicken-keepers' underground?

There are a lot more than are involved with TorontoChickens.com, for example. I know dozens and dozens, all over. It's not a downtown thing.

Do you name your chickens?

My last chickens – I gave them a group name. All three were called Ethel Mabel Merman. Like Ethel Merman, but with my grandmother's name inserted in between.

What is your showcase dish?

I can't eat 18 eggs a week, which is what you get from three chickens. I have a lot of dinner parties where I serve soufflés.

Crackdown will screen at the William Doo theatre, 48 Willcocks St., on Oct. 2 at 7 p.m., followed by a panel discussion. 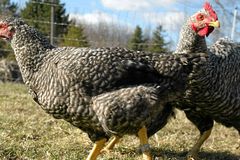 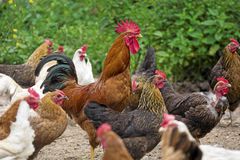 New breed of butchers cater to appetite for sustainability
January 25, 2011
Follow us on Twitter @globefoodwine Opens in a new window
Report an error Editorial code of conduct
Due to technical reasons, we have temporarily removed commenting from our articles. We hope to have this fixed soon. Thank you for your patience. If you are looking to give feedback on our new site, please send it along to feedback@globeandmail.com. If you want to write a letter to the editor, please forward to letters@globeandmail.com.
Comments