The urbanites of Toronto's King Street West normally wouldn't pause on the sidewalk unless Ryan Gosling were rescuing a cat stuck on a baby stuck in a tree. But they're slowing down, some stopping to try to puzzle out the meaning of a single-storey building on the corner of Peter Street, its windows lined only with life-sized, white-moustached toy soldiers.

Imagine if these curious pedestrians knew the place was endorsed by Momofuku's David Chang, and that they could walk right in and be given a tour of the themed rooms – Brunch, Mingle, Dinner and Gift – and fed in each one.

Inside the Gift chamber, its walls constructed of shiny, wrapped Christmas presents, lucky visitors are handed a small box of some little treat, maybe chocolate-caramel sea-salt popcorn, topped with a red, branded bow. They're encouraged to take a selfie in front of a mirror positioned to reflect the colourful, logo-adorned backdrop.

At the launch of the PC Insider's Collection Boutique, I take that mirror selfie, following the hypnotizing swirl of colours through the looking glass of a structure that exists wholly to promote supermarket convenience foods, while having none for sale.

"Experiential marketing," as this type of thing is called, is not a new idea. Others examples include a pop-up toy medical clinic in England that promoted Disney's Doc McStuffins, and, to promote the launch of their channel in Belgium, TNT hiring stunt actors to pretend to murder each other in a public square. Experiential marketing is the flavour of the day for brands with deep enough pockets.

At the launch of the PC boutique, a battalion of black-clad cooks, marketers and publicists see to it that everyone tastes the new line of PC Insider's Collection products. In the Brunch room, a Loblaws-branded toy train roves through a castle of wooden blocks, carrying plates of PC waffles garnished with PC speculoos cookie butter and PC smoky bacon flavoured maple syrup.

The online catalogue proclaims "brunch is the new dinner," a permutation of "_____ is the new _____" that finally untethers the English language from meaning. Further confusing matters is the Dinner area of the boutique: I expect to enjoy the title's usurper, the Meal Formerly Known as Brunch, but instead find dinner, the old dinner, like from the 1950s, when people used dial-up modems to watch Netflix.

In the Mingle room, under a thatch of white and green branches, staff hand out a collection of mini Thai hors d'oeuvres, crunchy shells holding curries that are as spicy, fishy and pungently Thai as Mickey Rooney is Japanese. "Mingle is a magical place," says executive chef Tom Filippou, describing the product line. "The food is just as magical. Who would have thought Thai hors d'oeuvres?" Who indeed, except maybe people in Thailand.

The gochujang chicken wings are better. They don't have any heat, but they're saucy and crunchy, ideal drunk snacks. Unfortunately, the wings from the package I test at home later don't come out crunchy, and the packet of red glaze isn't enough to give them the reflective, cherry sheen they have at the party, or on the box.

This might sound snobby, an unfair criticism of frozen wings. I didn't always care about these things. I used to love convenience foods. As a teenager, I learned to boil spaghetti, and this, in combination with President's Choice bottled tomato sauce, made me feel I had all I needed. When a grown-up once asked why I didn't simply make my own tomato sauce, I looked at him like he'd asked me why I didn't make my own spaceship.

That was a long time ago, in a sprawling suburb known as "the real Canada." Since then I've become a food snob. And I am not the market for these products.

In the main room, after the invited guests have had an hour to graze, the party DJ turns down Echosmith chanting "I wish I could be like the cool kids." The crowd, excited to see Chang, gathers closely. Phones come out to capture the internationally beloved chef, who is dressed in a navy, a fall jacket over an every-david plaid shirt, the uniform of a politician touring a car factory.

Chang is adored in the food world and beyond. For the last decade, his restaurants (six in New York, three in Toronto, one in Sydney and one in Washington, DC) have been commercial, critical and transformative successes. Their influence has rippled out into the foodosphere, echoing back here now, Chang standing in front of a box of frozen PC gochujang chicken wings, a mass market Canadian interpretation of a Korean flavour he helped popularize in America.

Chang's empire has expanded to publishing cookbooks (four so far), a magazine (Lucky Peach) and television appearances (The Mind of a Chef, Treme). He's a big enough deal that he can talk about the Toronto Raptors for 10 minutes and still receive applause. But having been featured in ads for Audi, Budweiser and Uniqlo, Chang knows how to put the brand first.

"What makes it an exciting time is that certain things that were prohibited are now completely accessible," says Chang to an enthralled audience. "I can't believe that people are eating gochujang. On a hot wing."

When he takes questions, I asked which he liked better, the sauce on the Loblaws wings, or the gochujang-based ssam sauce that Momofuku sells online (not carried by Loblaws).

"I think that they're both equally delicious," he says, to applause. Someone else asks if he likes Toronto. His smile returns.

"Any time people can increase their awareness of something, I'm not going to be a food snob about it," Chang tells the audience. "The fact that I can say 'gochujang' and no one says, 'What the hell is he talking about?' means that these are exciting times."

But then he adds a contradictory caveat. "As long as it's delicious, responsibly sourced, responsibly produced, who cares?"

Right, so, I ask about that. The pork in the PC bacon rounds and PC applewood smoked bone-in ham being promoted are all from conventional farming, a.k.a. factory farming, a.k.a. warehouses of pigs where efficiency takes precedence over quality or animal health and welfare.

No one's forcing Loblaws to go cruelty-free, organic, to denounce gestational crates. And cooks toil for a long time for poverty wages, so when someone like Chang becomes a famous chef, let's not begrudge them a payday any more than George Clooney shilling for Nespresso or Anna Kendrick getting that Kate Spade money. Having made one appearance doesn't make him responsible for a national supermarket chain's business practices.

But he should know that adding the caveat of responsible sourcing means that he does not vouch for the product behind him. There's only a smallish group in the room listening to him speak: most consumers will go on his reputation, not his words, and many might take his thumbs-up to mean that this bacon is from pigs raised outside, naturally, without antibiotics.

The boutique, open to the public until the end of the year, is brilliant.

It transports the consumer from the end of the supermarket aisle, where they might eat a free sample from a folding table under fluorescent tubes, into the realm of flattering lighting and celebrity cameos. Everyone likes free samples, and it's fun to feel like you're in a commercial.

But if we learned anything from The Purple Rose of Cairo, Pleasantville or The Last Action Hero, the world of make-believe is a nice place to visit, but you can't live there. Prop food looks delicious, but you can't actually eat it.

How Loblaw’s President’s Choice is taking marketing cues from the fashion industry
November 11, 2015 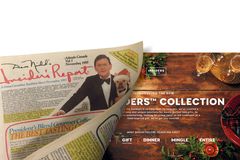