On a cross-country trek from Tofino, B.C., to St. John’s, Nfld., Chris Johns taste-tests the theory that central Canada’s food scene has got nothing on what chefs are feeding the hungry hordes gravitating to its coasts. The dishes he encounters – adolescent potatoes, broiled beach oysters and, yes, even smoked goat cheese with local ants – confirm his suspicions might be right.

Photography by Kari Medig in Tofino and Duncan de Young in St. John’s 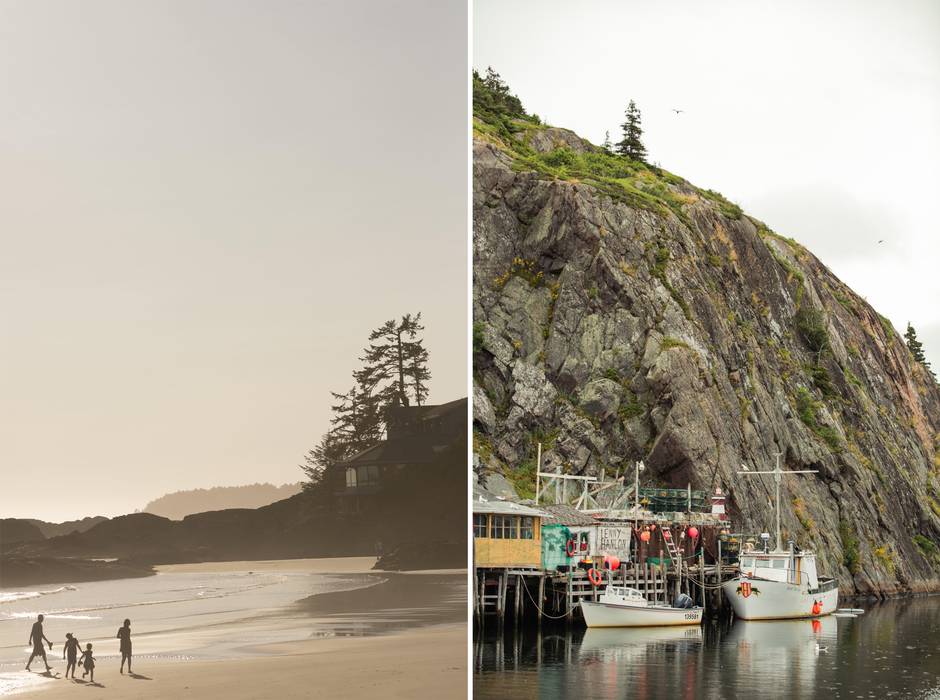 The sun is barely up and I’m already 13 kilometres off Vancouver Island’s west coast fighting a salmon. The rod, curved like a drawn bow, tenses, and the great silvery chinook at the end of the line makes a dazzling leap out of the Pacific into the bright air.

Seven thousand kilometres and a few days later, I’m bobbing out on the Atlantic off the eastern shore of Fogo Island hauling in a lazy cod. A humpback whale in the distance exhales a noisy mist, rolls over on its side and slaps the water with its scalloped fin.

I’ve made the long journey across the country, from the edge of the West to the extreme East, not just to catch the iconic fish of each region – although there’s no way I’d pass up that opportunity – but to get a taste of two of the most dynamic food scenes in all of Canada. No longer dominated by its major urban centres, Canadian food is finding its ultimate expression at the very edges of its borders.

Pound for pound, Tofino, B.C. (population 1,876), is the finest food city in North America. Between The Pointe, SoBo, Wolf in the Fog, Kuma and Picnic, there are more great places to eat in Tofino than in many major cities. Similarly, in Newfoundland, restaurants like Raymonds, Mallard Cottage, The Merchant Tavern, Bona Vista Social Club and Fogo Island Inn are making the province one of the most exciting dining destinations in the world.

– Where to eat in Tofino 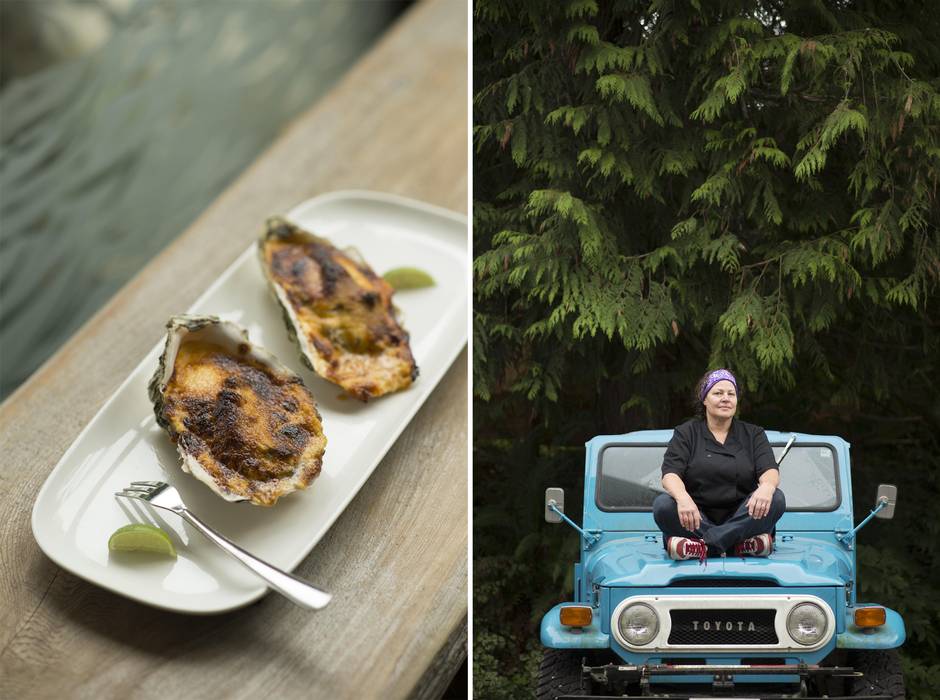 At lunch one afternoon in Tofino, between bites of broiled beach oysters slathered in miso mayonnaise and spiked with salmon bacon, I ask SoBo chef and owner Lisa Ahier for her take on what makes the food scene in Tofino so delicious. “For me, it’s a little bit like Napa,” she says. “You know how you’re not going to really get a bad meal in Napa because people are accustomed to good food? That’s where Tofino is right now, and that means the bar is just so high.” 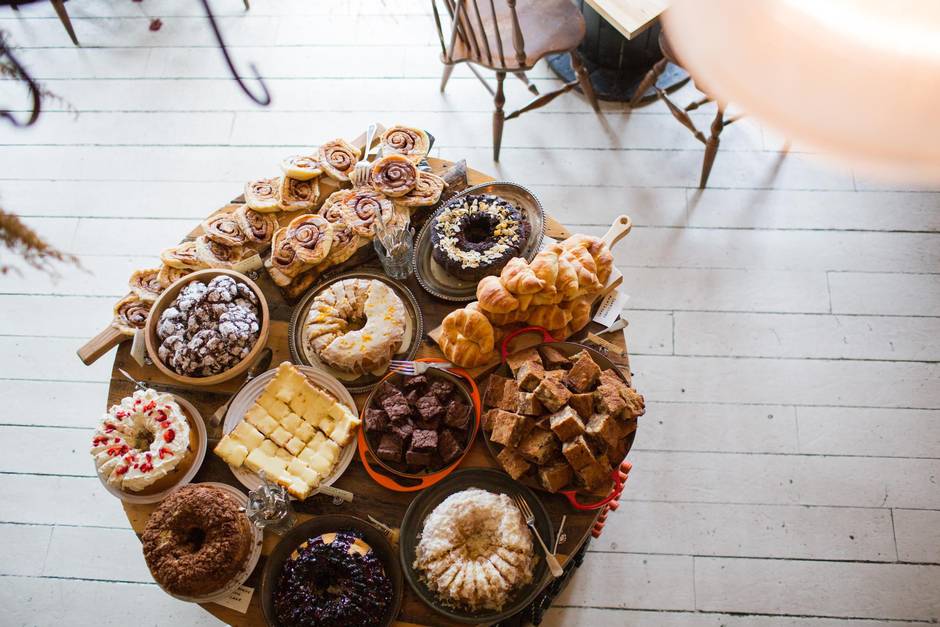 A few days later in St. John’s, over a second helping of blueberry crumble at Mallard Cottage, I pose the same question to that restaurant’s chef and owner, Todd Perrin. “I think there’s no doubt that when Jeremy and Jeremy opened Raymonds it was a game changer,” he explains, referring to chef Jeremy Charles and sommelier Jeremy Bonia. “What those guys have done is just so impressive, and it really inspired, not only me, but a lot of chefs around here.”

Perrin is not being modest. Raymonds is quite possibly the best restaurant this country has ever produced. The dining room, all plush carpet, crown moulding, silk wallpaper and crystal chandeliers, is flawless. A recent dinner there included a simple plate of “adolescent potatoes” barely dressed with a nutty sherry vinaigrette and potato foam, all topped with a dark malt and hazelnut crumble that referenced the rich soil the potatoes are grown in. The dish was so flavourful it was like discovering a new, more luxurious vegetable. 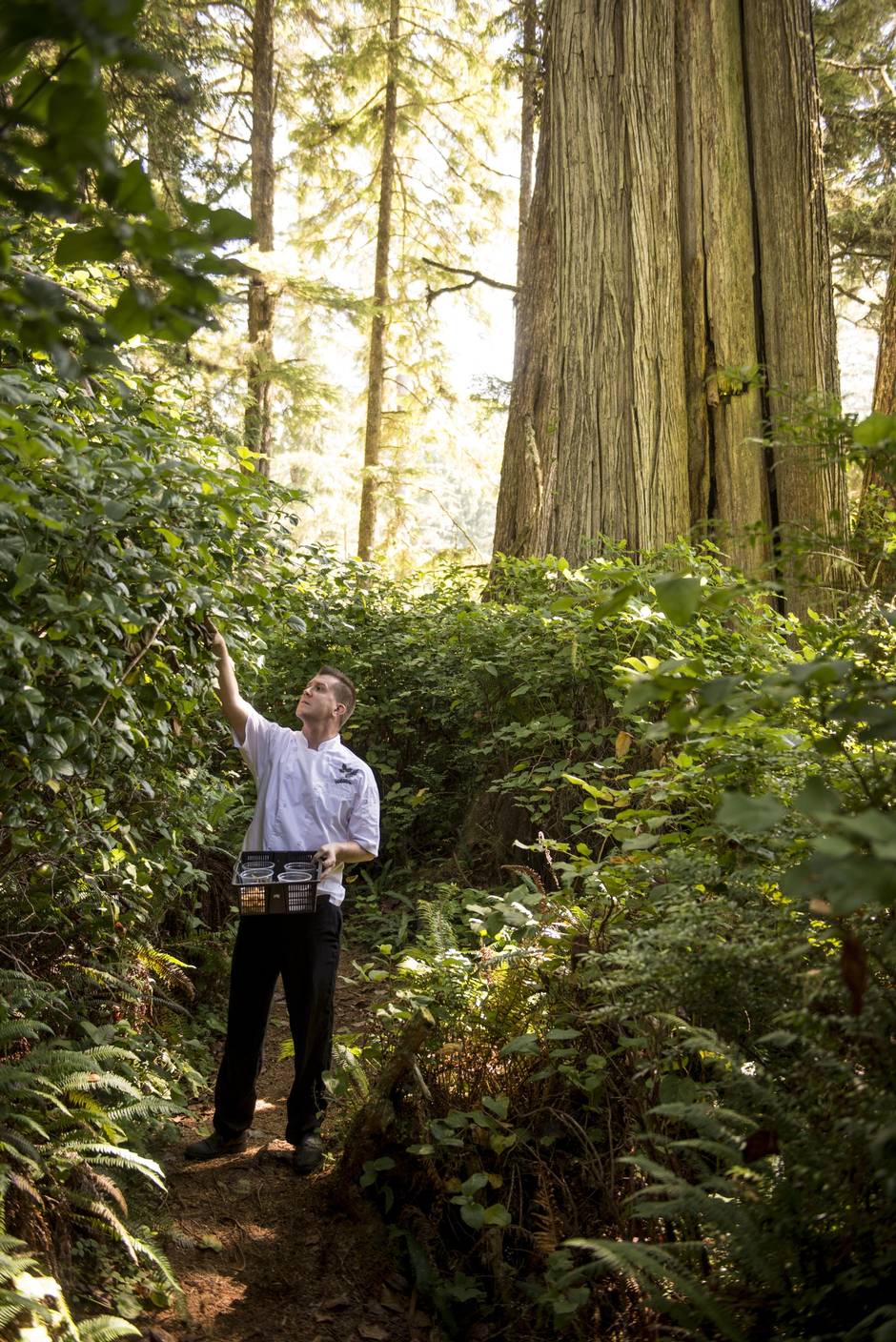 Warren Barr of The Pointe.

If Raymonds represents the seed from which the current food scene in St. John’s has sprung, then The Pointe restaurant at the Wickaninnish Inn was the catalyst in Tofino. Back when it opened in 1996, local, seasonal eating was very much the exception rather than the rule. But for Charles McDiarmid, the managing director, it was second nature. “Having grown up here, we’d walk to the dock to pick up a salmon to barbecue at home,” he says. “We knew many fishermen and providers already, so we were 100 per cent on board when our chef came to us and said he wanted to make a real commitment to the local terroir.”

Almost 20 years later, that adherence to local ingredients is no longer a novelty. It’s the default philosophy for almost every dish in Tofino, from the ling cod fish and chips at the Wildside Grill to the smoked fish platter at The Fish Store and Oyster Bar to the Clayoquot seaweed salad at Kuma. 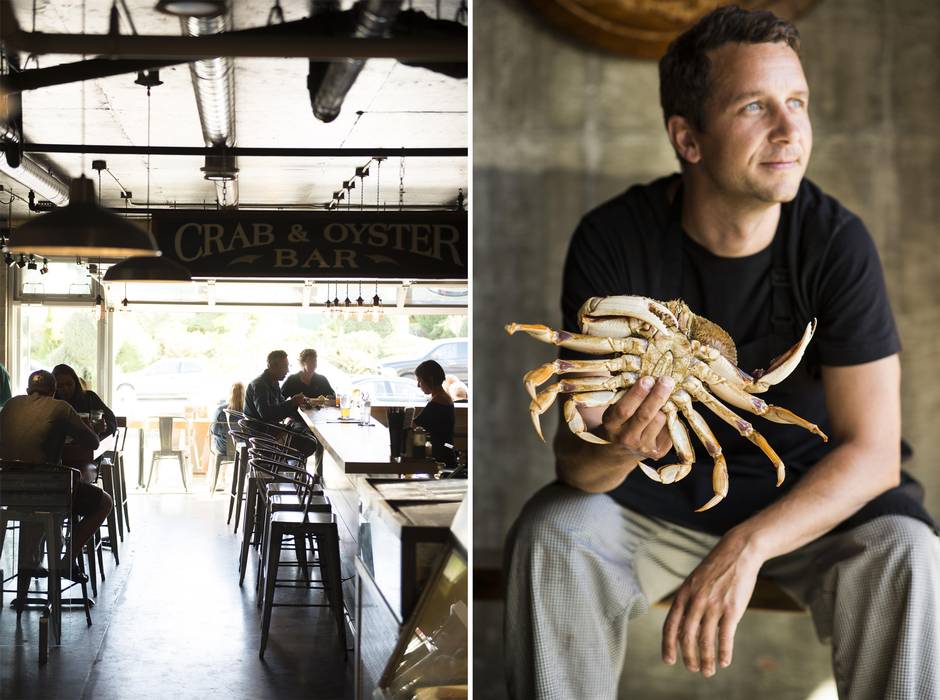 Dylan Tilston of The Fish Store and Oyster Bar.

No one, however, is doing more with local ingredients in Tofino right now than chef Nick Nutting and his crew at Wolf in the Fog. From my seat at the bar I am right next to the kitchen pass where a small brigade turns out hundreds of immaculatelooking plates. Here come smoked oysters wrapped in a hive of fried potatoes, plates piled with thick slices of albacore tuna and crisp, confit pork, and cast iron skillets brimming with prehistoric-looking gooseneck barnacles. “We’ve got the best products in the world here,” Nutting says. “Not just the stuff coming off the docks, but incredible wild mushrooms, chanterelles, pine mushrooms, yellow foot.” 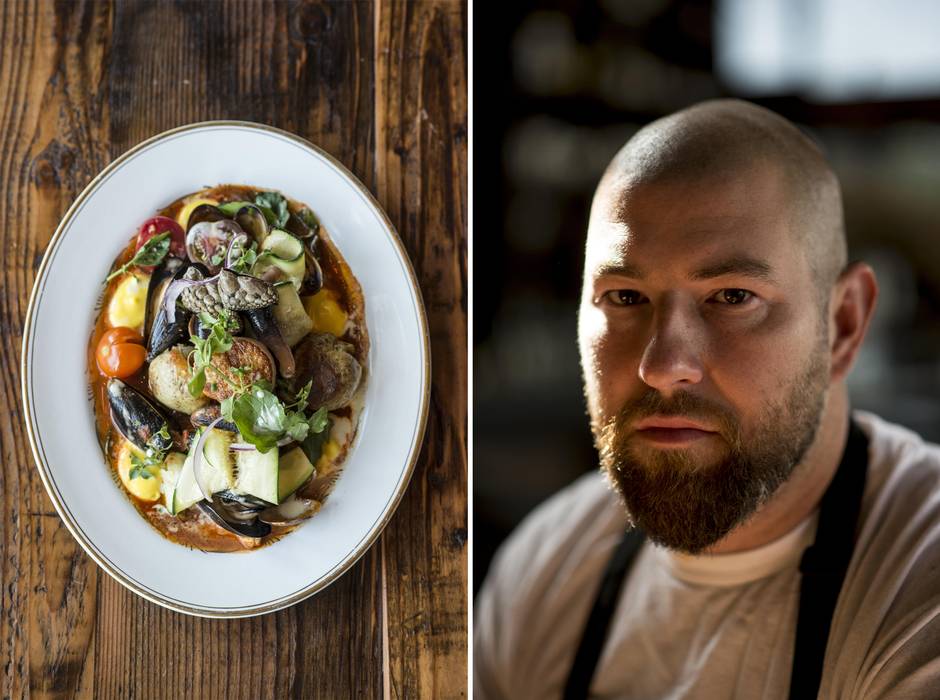 The spanish bombshell at Wolf in the Fog; chef Nicholas Nutting.

Nutting’s claim might come up against some opposition from the chefs in Newfoundland, who are pretty proud of their own indigenous bounty as well as the long, rich culinary tradition they draw from. “I’m trying to get in touch with the way people used to eat here,” Fogo Island Inn chef Murray McDonald tells me one day as we scour the shoreline for wild snacks (the grocery list: oyster leaf, crow berries, seaside arugula). “Salting, curing, preserving – this is how people have lived here for centuries and it’s what inspires my menus.” Murray may draw inspiration from those sources, but, as dishes like his smoked goat cheese with braised goat, strawberries and local ants prove, he is not afraid to put a new spin on tradition.

Finding new ways of utilizing local ingredients also motivates chefs like Tina Windsor at Picnic, a phenomenal charcuterie shop tucked away in an industrial strip on the edge of Tofino. She cures ham with the kelp-infused beer she gets from neighbouring Tofino Brewing Company and preserves sea asparagus with wild nodding onion flowers and honey. She doesn’t sugar-coat her take on Tofino’s exceptionalism: “Everything is ridiculously expensive here and we’re totally at the whim of tourism,” she says bluntly. “But [those hurdles] attract people that want to make it work and have the willpower to do it.” 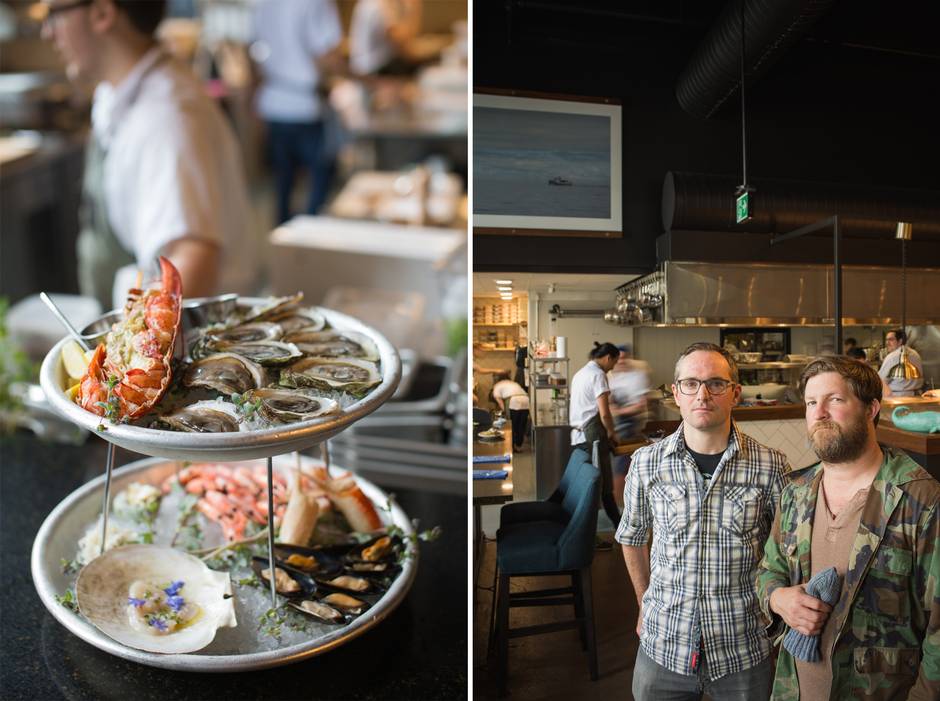 On my last day in St. John’s I sit down for lunch with chef Jeremy Charles at his new restaurant, The Merchant Tavern, a more casual, relaxed extension of the culinary style he practises at Raymonds. He’s eager to show me the fresh pink scallops his friend just dived for the night before (his team will thinly slice the bivalves and turn them into bright ceviche along with the razor clams they’ve started bringing in). “I don’t think anyone’s ever harvested razor clams in Newfoundland before,” he tells me.

The Merchant Tavern may be more casual and accessible than Raymonds, but it’s no less impressive. The chefs in the open kitchen, who travel from around the world for the opportunity to work with this team, are constantly cleaning their stations and honing their knives. Even the bottoms of the pots and pans are scrubbed nightly. “We don’t want to take any shortcuts here,” is how Charles puts it. “Even if we’re doing a simple pasta or a steak frites, we want to do everything the right way. We’re just trying to make beautiful food.”

If you go to Tofino 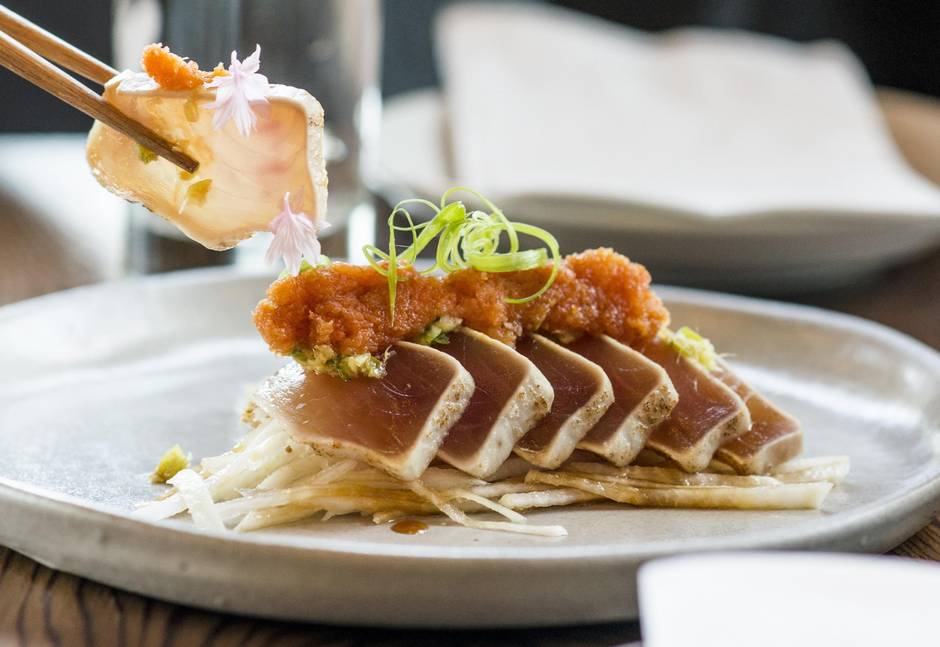 WOLF IN THE FOG

Chef Nick Nutting and his crew set out to do nothing less than define Tofino cuisine at this comfortable year-old spot overlooking the harbour.

Must-try: Spanish Bombshell, a skillet-bursting combination of impeccably fresh shellfish in a rich tomato broth studded with tender potatoes and tamed by a bright aioli.

The flagship taco truck of a burgeoning restaurant empire that now includes trucks and traditional restaurants around B.C. has plans to expand across Canada.

The renowned restaurant in the Wickaninnish Inn started it all. The octagonal dining room is mostly windows and provides an iconic view of Chesterman Beach.

Chef Lisa Ahier’s bricksand-mortar outpost of her legendary taco truck is a local favourite as well as a tourist attraction. 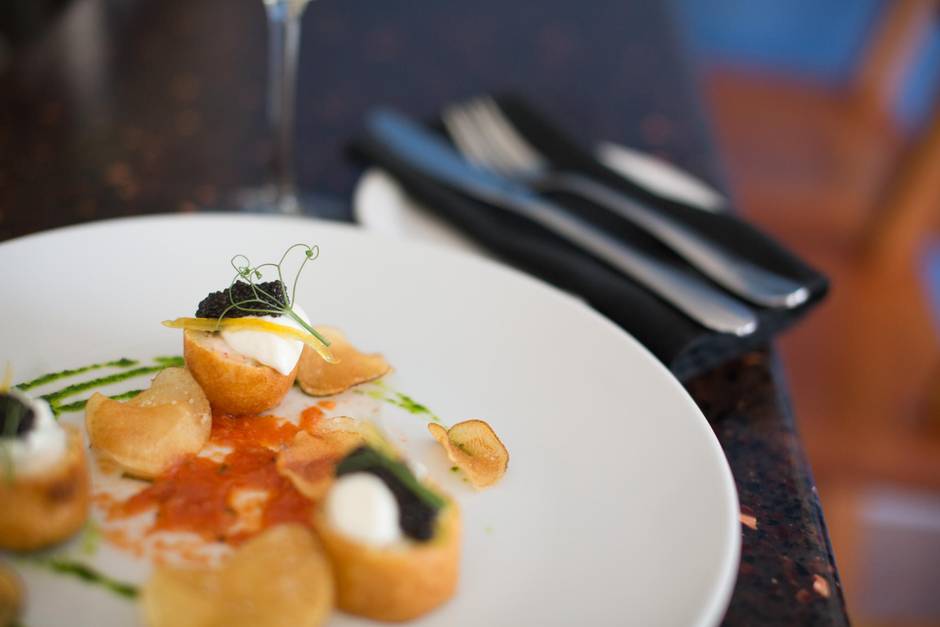 Chef Jeremy Charles and sommelier Jeremy Bonia’s exquisite jewel box of a restaurant might just be the best restaurant this country has ever produced.

Must-try: Wise diners splash out on the tasting menu and let the kitchen take charge.

Must-try: As enormous as it is tender, the halibut collar is a little used, but entirely delicious cut of fish.

The latest offering from the Raymonds crew offers the same impeccable technique, attention to detail and first rate local ingredients in a more relaxed setting.