Vancouver's Dale MacKay claimed a $100,000 prize in a wine-inspired challenge that pit him against Toronto's Rob Rossi and Calgary's Connie DeSousa.

"I could have done five finales," Mr. MacKay boasted Monday when the ultimate episode aired, noting he felt more relief than surprise by the win.

"I totally wish we could have done a five- or six- or seven-course menu where you really had to cook. I would have been loving that for sure."

Throughout the series, the cocky 31-year-old established a reputation as one of Food Network Canada's more passionate homegrown chefs. He brimmed with confidence during intense cook-offs and often turned wistful in direct-to-camera confessions when he talked about his eight-year-old boy.

The competition ended with a tearful reunion between the single father and his son.

"We did it man," Mr. MacKay says while clutching the child in a finale shot eight months ago. "Told you we'd do it."

MacKay, who finally gets the $100,000 now that the episode has aired, said he'll use the money to take his son on a European vacation and invest in his newly opened restaurant, Ensemble.

The Saskatoon-born cook beat out a 29-year-old DeSousa, whose trademark was charcuterie and bold flavours, and a 27-year-old Rossi, whose expert display of various cooking styles earned him a leading four elimination wins.

"I would have liked to have won it," the baby-faced Rossi says in the finale after learning he came in second.

"But I don't regret anything I've done and I think Dale really deserved it. He put up some phenomenal plates."

Chefs had to create a three-course menu that reflected their philosophy. At the last minute, they were asked to prepare an amuse-bouche as well, but Mr. MacKay went one further by throwing in a second main.

His $100,000 meal consisted of Quebec Brie cheese as the amuse, salmon prepared two ways, a main dish of black cod with BBQ pork consomme accompanied by a plate of roast lamb, and a lemon custard topped with a strawberry sorbet for dessert.

The double-dose surf-and-turf drew accusations of cheating from Mr. Rossi, who countered with a rich meal of foie gras, bone marrow and beignets, and Ms. DeSousa, who offered up a terrine, lamb and ice cream.

But Mr. MacKay, who also wins $30,000 in kitchen equipment, said he only learned of the controversy when he saw clips from the show last week. He dismissed claims he did anything wrong.

"I had to do even more than everyone else to have a shot at winning so I really wanted to push it," said MacKay, who admitted to feeling like an underdog at times with host Thea Andrews and judges Mark McEwen and Shereen Arazm.

"You never know. In other challenges I felt that I did really well and I was either on the bottom or they really didn't like it."

The win comes after an already impressive resume for Mr. MacKay, who began as a teenage fry cook in Vancouver.

Eleven years ago, he headed to London where he talked his way into a job at Ramsay's restaurant, Claridge's. From there he continued to other Ramsay establishments in London, Tokyo and New York and most recently served as executive chef of Vancouver's four-star dining hall, Lumiere.

Lumiere closed in March and two months later Mr. MacKay opened his first restaurant, Ensemble, just off bustling Robson Street. He describes it as refined food in a relaxed atmosphere.

Although Ensemble will inherit a good portion of the prize money, Mr. MacKay teased that he has other plans, too.

"When I watch the show I see everyone saying, 'Well, Dale only does fine dining,' and 'Dale does this' and 'Dale does that,' " said Mr. MacKay, who beat out 15 competitors including a former chef for Oprah Winfrey.

"I'm taking this as a challenge. You definitely could see me doing some extremely casual stuff pretty soon just to prove a point."

"I don't think I'd ever work for another chef again, you know," he said. "I'm ready to just be under my own name completely."

The search has already begun for a followup season of Top Chef Canada. 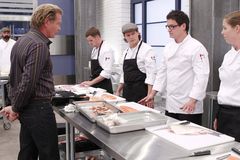 New York chef David Chang to open two Momofuku restaurants in Toronto
March 4, 2011
Follow us on Twitter @globefoodwine Opens in a new window
Report an error
Due to technical reasons, we have temporarily removed commenting from our articles. We hope to have this fixed soon. Thank you for your patience. If you are looking to give feedback on our new site, please send it along to feedback@globeandmail.com. If you want to write a letter to the editor, please forward to letters@globeandmail.com.
Comments