If there were a dead-simple way to instantly become a better, faster and much more consistent cook and baker, you'd want to know about it, right? Here it is. You need to buy a digital kitchen scale. You can get a good one for less than $30. A digital kitchen scale will change your cooking life.

That's what mine has done for me. Nearly every week for four years now, my wife or I have made at least one loaf of Sullivan Street Bakery's simple, no-knead bread – the zero-effort, crunchy-crusted, slightly fermented stuff that's better than almost anything you can buy. We've always made the dough with volume measures: three cups of flour, 1¼ teaspoons of salt, 1⅝ cups of water, and so on. It was good enough. It was fantastic, really. But it turns out we had no idea how much better it could be.

This fall, I found the same recipe, only with weight measurements, and so I started using my digital kitchen scale. Instead of carefully measuring out three cups of flour, I just dumped it into the bowl until the display hit 400 grams. Those 400 grams equalled just 2½ cups by my hand. I'd been using nearly 20 per cent too much flour every time.

That very first loaf was moister, lighter and tastier with a chewier crumb. All that extra flour had been preventing the dough from developing the way it should.

What works for bread is just as useful for cookies, squares and cakes, I've since learned. "Volume measuring is the reason a lot of people think they can't bake," said Mika Bareket, the owner of Good Egg, a cookbook shop in Toronto.

Digital kitchen scales are also indispensable for savory cooking. All those recipes that call for "one cup grated cheese"? That can equal 45 grams or 90 depending what sort of grater you use: the difference between a perfect dish and one that's swimming in grease.

The same goes for fats such as shortening, as well as chopped nuts and vegetables. (How finely are they chopped? How tightly are they packed?). I've even started using my scale to portion freshly ground beef into equal four-ounce hamburgers. A four-ounce patty seared in a smoking cast-iron pan takes exactly two minutes and 15 seconds a side to come out medium. I cook them to a stopwatch. I don't bother to test for doneness any more.

But what do I know? Take it from the country's most influential food professionals.

Claire Tansey, the food editor at Chatelaine magazine, is such a believer that she's converted many of her favourite recipes at home into grams. "It takes fewer measuring cups and spoons, so the cleanup's easier," she said. "It also cuts down on prep time." When a recipe lists several ingredients by weight, Ms. Tansey said, you merely hit the scale's zero button before adding the next one in.

Kirsten Hanson, senior cookbook editor at HarperCollins Canada, is also a weigher. "Once you move away from the intimidation factor, you realize how easy it is and how great the results are every time," she said.

Adell Shneer, the test kitchen manager at Canadian Living, said that when she bakes at home, she, too, weighs whenever possible. The reason: "Consistency. I weigh things that I want to turn out exactly the same every time."

But just as she was saying this, Ms. Shneer seemed to grasp the irony.

She paused for a second. "Oh, I'm in such deep trouble now."

Kitchen scales are the dirty secret of Canadian recipe publishing. Everybody in the business knows that weight measures are superior. And yet not a single major Canadian food publication (The Globe and Mail as well) uses them outside of meat, poultry and some vegetables – ingredients that are sold by weight. "Volume measurement is just how Canadian cooks cook," Ms. Shneer said. Translation: They don't think we're ready for it.

"They'd tell us to put chicken in the blender so we could fit it into a measuring cup if they could," scoffed Laura Calder, a Canadian television chef and cookbook author.

If you ask five different cooks to measure a cup of a dry ingredient, you'll get five different measures. Part of the problem is the weather: many, such as flour, change volume as they absorb humidity. But a bag of flour also compacts over time, depending how it's been handled.

One solution is to use the method that Fannie Farmer, the 19th-century Boston cooking instructor and author, first described back in 1896, in her groundbreaking Boston Cooking School Cook Book. "To measure a cupful, put in the ingredients by spoonfuls or from a scoop, round slightly and level with a case knife, care being taken not to shake the cup," she instructed.

That's how both Chatelaine and Canadian Living's test kitchens (and most North American cookbooks) recommend you measure flour. (Bonus points if you can manage it without making a mess.) But nobody does that in real life. As Toronto food blogger David Ort pointed out in a recent posting, not even Canadian Living does. In a Web video the magazine produced in 2008 – called Canadian Living Food Basics: Accurate Measures – a demonstrator blithely fills her one-cup measure exactly the way you're not supposed to: by scooping it into the flour. Oh well.

Aside from speed and accuracy, here's another benefit to weighing: It's what everyday home cooks in France, England, Italy and nearly every other advanced country with a proud culinary culture do. (Only the United States and Canada still use volume.) Once you own a scale, you can follow their recipes.

"If you want to get into a bigger world of cooking, your vocabulary has to expand to include weight measures," Ms. Calder said. "The dry cup stuff, it's for amateurs. It's for simple casserole cookery."

So far, at least, most home cooks here have resisted. "I've seen a lot of people come in here and they're totally opposed to buying a scale," said Jonathan Cheung, owner of Appetite for Books, in Montreal. "Yet they'll happily buy crazy, totally useless gadgets for the kitchen, like hand blenders and T-fal pans and garlic crushers," he added.

It's a chicken-and-egg problem. Ms. Tansey said Chatelaine doesn't include weights in its recipes because 95 per cent of its readers won't use scales. Lucy Waverman, a Globe food columnist, said: "Most Canadians do not have scales and are not going to buy them. You are fighting generations of volume measurement and it is not going to change."

There's been some progress nonetheless. The New York Times' standard-bearing Wednesday dining section began adding weight measurements to its baking recipes this year, and publishers here and in the United States have begun including weight measurements in some cookbooks aimed at everyday cooks. Both Ms. Calder, whose most recent book is titled Dinner Chez Moi, and Jennifer McLagan, the Toronto-based author of Odd Bits: How to Cook the Rest of the Animal, succeeded, after some arguing. It's no coincidence that they both work with Ms. Hanson of HarperCollins.

For her part, Ms. Hanson says that she doesn't have plans to automatically include weight measures in future cookbooks. But she's likely to be receptive if that's what the authors want, she said.

This is progress in a way.

No baking powder? No problem. Just make it yourself
April 6, 2010 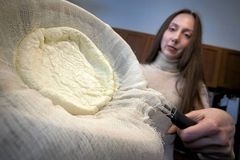