The first time John Jackson and Connie DeSousa announced on Facebook and Twitter that $5 burgers would be available that night from the back door of Charcut, their Calgary roast house, 30 people waited in the alley.

"We wanted something really unique and fun to add to the food culture in Calgary," Mr. Jackson says. The alley burgers – pork and roasted garlic sausage patties topped with Quebec cheese curds and piri piri aioli – filled the bill.

Mr. Jackson and Ms. DeSousa (a finalist on last season's Top Chef Canada) initially imagined the event as industry-focused, offering affordable food at late hours to staff of the other restaurants that share the downtown alley. But the experience of waiting next to dumpsters proved oddly attractive and the lineups grew. With only a limited number of alley burgers available, many walked away empty-handed.

"It turned into something that just took a hold of downtown Calgary," Mr. Jackson says. "It became not only about the burger, but a gathering and an event."

When 350 people lined up on a Monday at 11 p.m. this past June, a year after the first event, they knew the idea had outgrown the alley. Now, the Alley Burger food truck sells burgers, fries and poutine around the city.

It's a remarkable development, considering food trucks weren't allowed to operate on public streets and parking lots in Calgary until this August. Mayor Naheed Nenshi – who was an early adopter of alley noshing – helped launch a pilot project that gave truck owners special business licences.

Food trucks selling such items as gluten-free smokies and French fries, gelato, gourmet tacos and, of course, alley burgers, have helped transform the local food scene. Phase one of the program successfully introduced the trucks to the city's streets, with customers tracking their locations through social media. For phase two, nine of the trucks plan to continue operating through the winter months.

"It's something new and vibrant for Calgary," says James Boettcher, who heads up YYC Food Trucks, an organization representing the city's food truckers. People are "ecstatic" about the gourmet dishes sold for decent prices, he says.

Mr. Boettcher, who operated his Fiasco Gelato truck in the summer, has relaunched as Fiasco Souped Up for the winter – a collaboration with a local soup producer, Nourish Soupworks, and an artisan baker, Kruse's Bakery.

The experience of alley eating has now spread north to Edmonton. Chef Andrew Cowan of Edmonton's Hundred Bar and Kitchen says he started serving back-door burgers after repeated requests from customers who had been to Charcut's events.

Mr. Cowan's changes up the ingredients of his $5 burger, which have included an all-beef patty topped with a duck egg and arugula and a Kobe beef version with white cheddar and sautéed mushrooms. The burgers are available from Hundred's back door, at late-evening times announced on Twitter. While a significant price difference exists between the $5 burger and the $23 prime Alberta beef burger topped with Oka and truffle onion rings served inside, Mr. Cowan says the alley burgers help to introduce new customers to the restaurant.

There's no food truck yet for Hundred's burgers, but a mobile food scene is also emerging in Edmonton. A festival called What the Truck?! was organized in June and September, with nine trucks offering everything from waffles to Chinese cuisine at a downtown park.

Mr. Cowan, who has held about 15 alley burger events since April, says he may slow down this winter. "It's going to be tough when it's minus 40 degrees to get people out," he says.

But the weather didn't stop Gail Garden and Alex Nelson from lining up for their first alley burger from Charcut last March. After hearing about the events from a friend, the Calgary couple started watching Charcut's Facebook page. Despite the fact that the Saturday night announcement coincided with minus-20 temperatures, Mr. Nelson and Ms. Garden decided to layer up and line up.

"Everybody who was down there was so cold, but there was just this camaraderie in the lineup," Ms. Garden says. After waiting for an hour, Mr. Garden and Ms. Nelson got their burgers, tucked them into Ms. Garden's purse and hurried home to enjoy them inside.

What chefs eat for dinner: pretzels, poutine and pickles
July 5, 2011 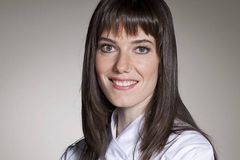 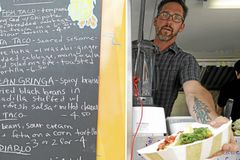