A cheese's seemingly magical ability to soften and liquefy affects many delicious decisions in our lives. You choose mozzarella for your pizza anticipating hot, stretchy cheese threads that won't surrender their grip on each gooey slice. Cheshire, a looser-flowing cheese, reigns supreme for coating steamed veggies with silken sauce.

Stringy or flowing are the two main characteristics that define a successful cheese "melt," both offering mouth-watering applications.

To unlock the mysteries of the casein matrix, I spoke to Art Hill, chair of the department of food science at the University of Guelph. We began with Cheese 101.

"Cheese is mostly spherical globules of milk fat trapped in a three-dimensional matrix of milk protein (casein)," Prof. Hill explained. "Most of the milk-water, along with lactose and some minerals, are removed as a liquid (whey) during cheese making."

Properties such as mineral, fat, moisture and acid content affect a cheese's reaction to heat.

"High acidity (low pH) in cheese changes the functionality of the casein matrix, reducing its ability to be cohesive or stretch, and instead it becomes more brittle," he said.

Think of feta, which is a higher-acid cheese: It crumbles easily and doesn't melt well.

"In general terms, cheeses made with a rennet coagulant (usually derived from the stomach of the lactating animal) will melt - cheddar, Swiss-style cheeses, Colby, Gouda are examples," Prof. Hill said. "Rennet cheeses are usually sweeter - meaning they are low in acid and acid affects meltability."

Emmenthal, the stretchy superstar, is low in acidity and also high in calcium. Calcium also strengthens the bonds of the casein matrix, creating a sturdy curd, thus a more elastic cheese. This chewy resilience would be exactly what you'd want for the top of your French onion soup, but perhaps not as desirable in a grilled cheese, where you want a more flowing, looser melt.

For the optimal oozy grilled sandwich, use a slightly aged, higher-fat cheese such as cheddar. Higher fat and moisture content disrupt a cheese's structure.

"Fat literally shortens the cheese-like butter in baking" Prof. Hill says. This leads to a "collapse and ooze" type of melt rather than a stretch. Aging will have the same effect, loosening the bonded proteins that are better fused and more elastic in younger cheese.

Mozzarella and provolone are made using a process of kneading and stretching the curd while it's still warm. This produces the cheeses' characteristic stringy texture and makes them champion cooking cheeses.

As for non-melters such as paneer and ricotta, they maintain their shape when cooked because they contain whey protein, a by-product of cheese making (remember Little Miss Muffet). Although paneer has similar acidity and fat as cheddar, the whey protein prevents it from breaking down. Cheeses like paneer will mingle with but not mix into other ingredients. Paneer can be cubed and added to soups or browned in a frying pan with vegetables.

Exhausted yet? Gather some cheese and have a proper meltdown. You've earned it.

Try mixing various types of cheese on your pizza or in mac 'n' cheese. Blend young cheese with a little extra-old - the young cheese gives some stretch and the old gives some flavour without too much oiliness.

Emmenthal and Gruyère are a classic fondue combo. Emmenthal is sweeter and provides pliability, while Gruyère has higher fat and adds oozy flow and a nutty flavour.

Wait until the final few minutes of baking to add your cheese topping to a casserole so it stays soft and gooey rather than drying out.

For a browned, bubbled finish, place your dish a few inches away from the broiler for a couple of minutes.

Stay away from high-fat cheese, which oils off easily. Art Hill, chair of food science at the University of Guelph, says a younger cheddar (about 31 per cent MF) works in most situations. When in doubt, cheeses that are three to six months old are great melters.

Bring your grated cheese to room temperature before adding it to your hot dish.

Adding some flour or cornstarch to a fondue or cheese sauce will help stabilize the mixture (just toss into the grated cheese before using).

Be careful with the heat

Avoid heating cheese too long or on high heat. Use a double boiler for a cheese sauce, or add cheese at the last minute. Overheating can cause oiliness or turn your melted cheese into a solid lump. 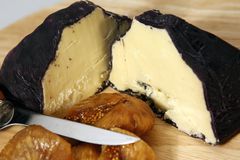 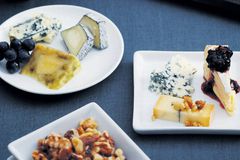