Herewith, three facts about horses: 1) They're cute. 2) They're edible. 3) You probably haven't eaten any lately because of fact No. 1.

If horsemeat is something you're interested in trying, you may want to do it soon. Anti-horsemeat activists would like to put an end to it. Last October, activists descended on a Vancouver butcher shop, a Toronto restaurant and an Alberta abattoir demanding that the practice of killing horses and eating their meat be stopped. Since then, horsemeat has been disappearing from menus, and diners are becoming wary of this now-controversial meat. And a private member's bill that would effectively shut down the slaughtering of horses for human consumption was tabled in Parliament in June.

All of which is a shame, gastronomically speaking, because here's a fourth fact about horses: They're delicious.

Take it from the more than one billion humans who consume roughly a million tonnes of horsemeat a year. In China, 400,000 tonnes of horsemeat - some cooked in a hot pot, some stewed with chili peppers - is transferred, by chopstick, from bowl to mouth every year.

In neighbouring Kazakhstan, horsemeat is turned into sausages, and in Mongolia, prepackaged horsemeat is found on grocery-store shelves. Some Belgians like their horsemeat lean while people in some regions of Italy like it fatty. The French prefer the tender meat fringed with yellow fat that comes from older horses.

Horse-eating countries of the world share another unexpected love: Canadian horses. Canada, it so happens, punches above its weight, producing an estimated 20,000 tonnes a year, most of which is shipped fresh to Europe. The Japanese, who are perhaps the world's pickiest eaters - this is a country where a fish can sell for more than a Porsche - import horses live. Every week, about 100 are loaded onto a plane at Calgary International Airport. By the time their meat is butchered, sliced and served in Japanese restaurants, each Canadian horse is worth almost $20,000, according to the 2008 Alberta Horse Welfare Report. So, why don't Canadians eat horse?

We do. We eat approximately 2,000 tonnes of it a year. In Quebec, you can find horsemeat in the supermarket, next to the beef, chicken and pork. Metro, the Quebec-based supermarket, lists horsemeat recipes on its website. By comparison, anglophone Canadians eat a tiny amount of horsemeat. One culture's dinner is another's taboo.

For the anti-horsemeat lobby, the reasons to not eat horses go beyond squeamishness. The meat, they say, may be loaded with dangerous chemicals, in large part because of the pharmaceuticals administered to racehorses (often the source of horsemeat), such as phenylbutazone, an anti-inflammatory that can cause anemia in humans. They say that slaughtering horses is inherently inhumane because, unlike cows or pigs, horses cannot be dispatched in an abattoir without undue suffering.

These assertions, however, don't hold up under scrutiny. According to the Canadian Food Inspection Agency, when it comes to "chemical residues," horsemeat performs as well or better than beef, chicken and pork. In random tests conducted in 2005 and 2006 - the most recent data - 99.95 per cent of horse samples showed "no detectable residues," compared with 99.02 per cent for beef and 99.71 per cent for pork. In its eight years of testing for phenylbutazone in horsemeat, the agency hasn't had a single positive result. And since July 31, to comply with European Union regulations, the CFIA requires horses be certified as drug-free for six months prior to slaughter.

As to the apparent cruelty of slaughtering a horse, I put the question to Temple Grandin, the famous animal-welfare specialist. Dr. Grandin, a professor of animal science at Colorado State University who has studied the horsemeat industry in Canada and the United States, told me horses do not possess a unique or unusual susceptibility to suffering.

"Their brains are similar to pigs and cattle," she said, "although they're a bit more flighty. As long as you use the right equipment, it can be as humane as any other kind of slaughter. I don't see any reason why a horse can't lead a happy life and be slaughtered and not suffer." The vast majority of welfare issues Dr. Grandin witnesses aren't due to slaughter but to owner neglect. If given the choice between being a horse and a commodity pig or chicken, Dr. Grandin says, "I'd rather be the average horse."

Perhaps the activists' real issue with horsemeat is that that it comes from animals with fuzzy ears and the long, soft noses that gobble carrots right out of your hand. Horses have names. Horses win thrilling races, give Olympic medal performances and pull hay wagons loaded with school children. As one activist put it at a recent protest, people shouldn't eat horses because they are "companion animals."

The activists are correct about one thing. The majority of horses aren't raised for the table. Only a small number - somewhere between 1 and 10 per cent - are born and raised expressly for human consumption. The others only become meat if and when their usefulness to humans has expired.

Yet this simple fact of horses' existence makes slaughtering them imperative. When they're too old to go on trail rides or too slow to win races, they may still live for another 10 or 15 years. Keeping horses requires land and money. The odd wealthy hobby farmer may be willing to support a horse through its golden years. But most owners just don't have the money.

For proof, look south of the border, where the slaughter has been banned. The last plant closed in 2007 and in the intervening years, Americans have discovered an unintended consequence: unwanted horses.

All over the United States, owners find themselves with horses they can no longer care for. Horses that can still fetch a decent price - about $200 (U.S.) - must endure a long journey to a Canadian or, more likely, a Mexican abattoir (where animal treatment standards can leave much to be desired).

Those are the lucky ones. Throughout the United States, skinny, neglected horses are being turned loose on public land or abandoned in the dead of night at auction barns. In Nebraska alone last year, more than 300 neglected or abandoned horses were seized, some of which had to be euthanized.

"It got worse as soon as they closed the slaughter plants," says Bob Hester, a deputy sheriff in Fillmore County, Neb. "It used to be people could take a horse to a sale barn and get $50 or $100 for it. Now it's costing them. So what do they do? They take it some place and dump it."

"All these regulations have done nothing to help the horse," says Devin Mullet, a livestock seller and self-described horse lover from Kalona, Iowa, who had to install cameras at his sale barn to stop people from dumping horses in the middle of the night. "They've just ended up making it worse," he says.

Canada has three choices. We can shut down the horse slaughter, in which case we will quickly find ourselves with more horses than we can feed. We can continue to slaughter horses and send most of the meat to other parts of the world. Or people across the country can try the meat Québécois know as chevaline.

One anglophone who cooks chevaline is Matthew DeMille, a chef at a Toronto restaurant called Parts and Labour that specializes in unusual animal parts such as bone marrow, ox tongue and pig's ear.

At a private event in June, Mr. DeMille prepared a six-course horse tasting menu that included a Vietnamese-style horse pho broth with toasted hay, and horse tenderloin stuffed with granny smith apples, sage, black currants and bread crumbs. For dessert, he had an idea to make crème brûlée from horse milk - you can get it in Europe, he says - but he couldn't find any, so he made a pastry using horse lard instead.

Parts and Labour stopped serving horse tenderloin because of public backlash. Online restaurant reviews were met by derisive comments from angry horse activists (a fate certain to befall this article's online version). One afternoon, at the Don Valley Brick Works farmers' market, a woman came up to Mr. DeMille and said, "You serve horse," in an accusatory tone. "That's why I will never come to your restaurant."

Horse hasn't been on the menu since July, but when I requested some, Mr. DeMille phoned in a tenderloin from Quebec and invited me for lunch. Raw, the meat was a deep, dark red, with light veins of pinky fat barely visible. He coated it in salt and pepper, seared it in a cast-iron pan, and finished it in the oven.

Compared with beef or lamb, horsemeat is surprisingly delicate, but with a whisper of gaminess that tells you the animal you're eating didn't spend its life digging its snout into a trough full of corn. There was an undeniably distinctive flavour and I tried - and failed - to put a word to it. Mr. DeMille stepped in. He swallowed a piece and said, "Just sweet, tender horse."

The activists have their own solution for the problem of unwanted horses: "humane euthanasia," which costs about $500. When a horse can no longer be cared for responsibly, they advocate calling in the veterinarian, who will kill it by lethal injection or by shooting it in the head (which is how horses are killed at slaughter plants). That still leaves the body. It can be incinerated, put out for scavenging, taken to a rendering plant, or buried with a backhoe. To a billion people - myself included - that's a waste of good meat.

Mark Schatzker is the author of Steak: One Man's Search for the Tastiest Piece of Beef . 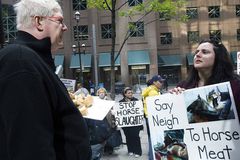 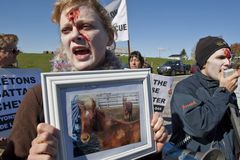