The ground was frozen as hard as pavement around Lennox Farm last week – you would never guess that just past the dirty snowdrifts and the detritus of yet another brutal winter, it looked a lot like mid-June inside the property’s barns.

Bill French, a fourth-generation farmer, cracked open one of the barns’ doors to reveal an enormous darkened cavern, all black except for a shimmer of pale yellow just above the floor. As our eyes adjusted, it became a field of colour, phosphorescent yellow leaves giving way to soft pinks and livid reds – row after row of top-grade rhubarb, growing as if by magic in the dark.

I pulled a long, thin stalk and took a bite, anticipating rhubarb’s usual rush of eye-watering sourness. But this rhubarb was only as tart as a Granny Smith apple, and with an all-encompassing burst of that early-summer rhubarb flavour that tastes like a long, lazy picnic out in the sun.

The words “fresh and local” may ring like a twisted joke through much of Canada’s winter, but now here it was, a half-acre field of any hungry home-baker’s fever dreams. “We’ve been harvesting this barn since February,” French said.

They’ll get 4,500 kilograms from this single space before starting the harvest in their other two barns. The story of how you grow rhubarb in the dark in the dead of a Canadian winter has nothing to do with some sort of cutting-edge agricultural innovation, or specialty seeds developed in a genetics lab.

Forced winter rhubarb, as it’s called, is viable from early January through May each year. Until the 1960s, it was a common sight in grocery stores and green markets across much of Canada; there were more than 60 winter-rhubarb growers in Ontario alone.

These days, even as interest in eating local produce is soaring, most consumers ignore local rhubarb until it’s warm outside – if they even know it exists at all.

“I’ve been doing this long enough to know not to grow too much until Easter,” French said. “In people’s minds, it’s a spring crop.” 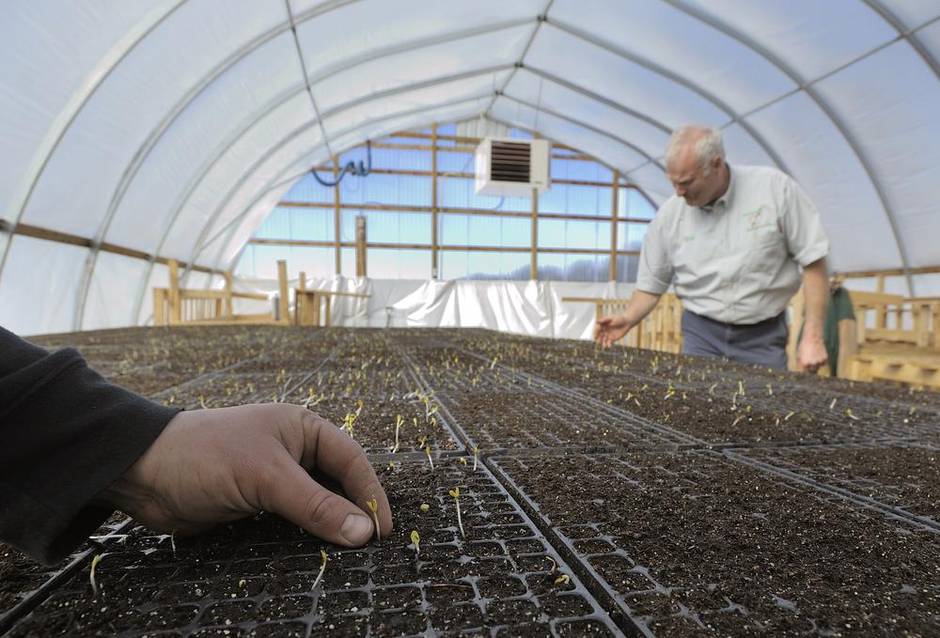 Bill French, right, and his son Brian, left, examine some of thousands of young rhubarb seedlings on Lennox Farm in Melancthon, Ont., earlier this month. (J.P. Moczulski/For The Globe and Mail)

Every fall, Bill and his son Brian French dig up ordinary two-year-old rhubarb roots from their fields outside – roots that have spent their lives soaking up energy from the sun as well as nutrients from the soil.

The farmers lay the roots and the clods of soil they come with onto their barns’ floors. Come the end of December, they flip on the heat in the first barn, to warm it to 10 degrees.

They start a second barn a few weeks after that, and the third barn another few weeks later. (The barns are well-insulated.) The heat forces the roots to expend all that stored energy into pushing up leaves and stalks; it usually takes about five weeks for the bare roots to transform into fully grown stems. 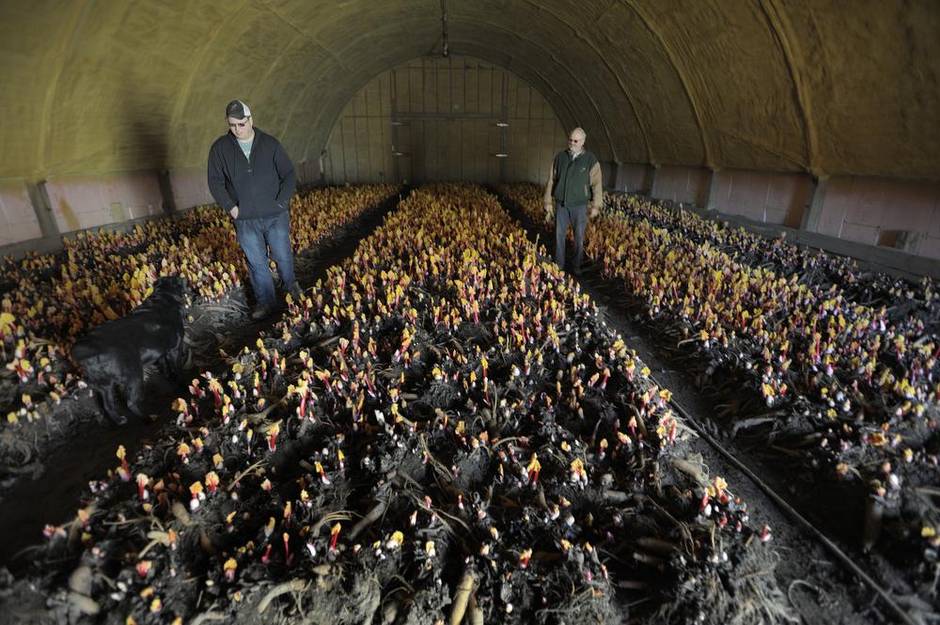 Brian French, left, and his father Bill examine their rhubarb crop, which they grow during the winter in heated barns. (J.P. Moczulski/For The Globe and Mail)

The darkness, though, is what makes forced winter rhubarb taste like an idealized version of the summer stuff. Without sun to activate the vegetable’s chlorophyll – yes, rhubarb is a vegetable, not a fruit – it doesn’t develop the typical sour green and bitter tastes. Even on its insides, most forced rhubarb isn’t green at all, but red instead.

Bill French’s great-great-grandfather came over from England in the 1850s and started a market garden just west of downtown Toronto, with rhubarb as a specialty. Rhubarb was newly popular both here and in Britain, thanks in part to the cheapness and availability of refined sugar.

Before long-haul shipping, it was sometimes called “the lemon of the north.” French can still rhyme off the names of the forced-rhubarb growers who worked at the peak of the crop’s popularity in the 1960s. Between Christmastime and Easter in Britain, there were special nightly “rhubarb express” trains that would ship tons of the stuff from Yorkshire into London’s shops. 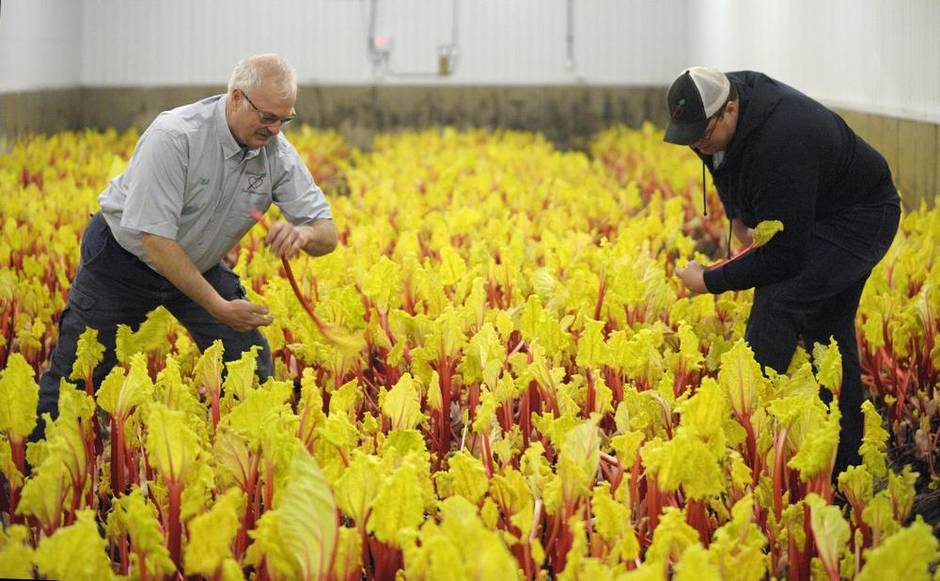 Bill French, left, and his son Brian examine and pick a few of their young rhubarb plants in a dark and heated greenhouse on their farm in Melanchon, Ont. (J.P. Moczulski/For The Globe and Mail)

The energy crisis pushed many Canadian farmers out – it got too expensive to heat the barns. Changing demographics meant that many new immigrants to Canada didn’t have a taste for rhubarb, and long-haul shipping and refrigeration filled grocery produce bins with other fresh fruits throughout the winter.

Today, there are just two forced-rhubarb growers in Ontario, French said. Though I heard of growers in Quebec, I wasn’t able to find any. One of the province’s largest rhubarb producers, based in Saint-Étienne, shuts down completely every winter, and a manager there said they didn’t know of any other companies producing it.

In British Columbia, forced rhubarb is often available through the winter (I saw it on Granville Island a few weeks ago), but is sourced mainly from growers in Washington State, French said.

When I spoke these past few weeks with people who work in food, mentioning that I was writing about local winter rhubarb, many of them were flummoxed.

“Does it get shipped from Belgium?” one of them asked. At least it’s available if you know what it is and where to look.

Sobeys stores in Ontario start ordering it in March, Bill French said, and then the other grocery chains come on later in the season. (“The chain stores all call it ‘greenhouse rhubarb,’ because nobody believes it’s grown in the dark,” he said, laughing.) 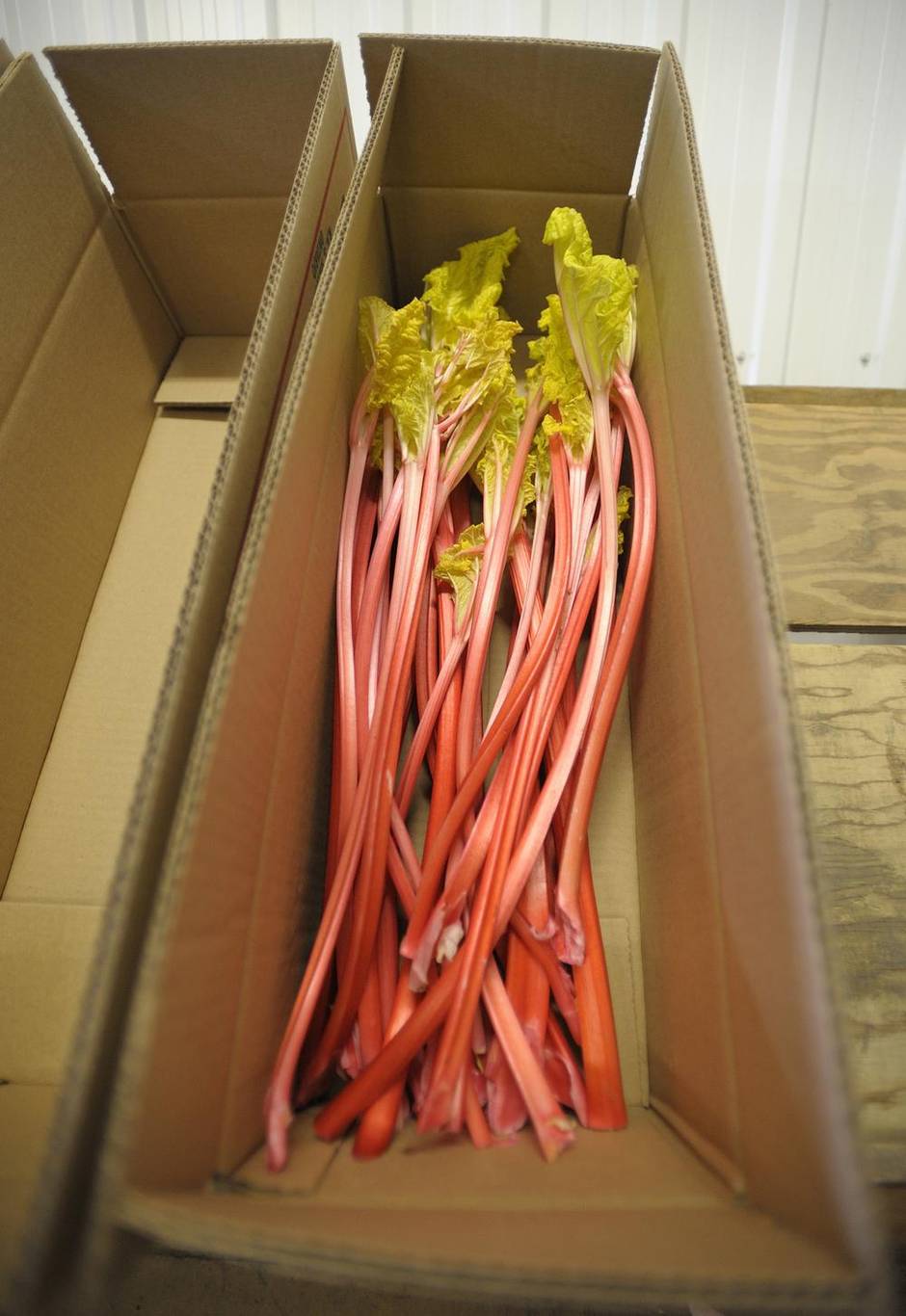 Chris Nuttall-Smith took home half a case of rhubarb from the French farm and turned it into pie. (Photo by J.P. Moczulski/The Globe and Mail)

It’s often available at Chinese-run grocers (rhubarb is a common ingredient in traditional Chinese medicine), as well as at gourmet stores and some farmers’ markets. It’s been available at Toronto’s St. Lawrence Market for a few years.

A couple of days after visiting the Frenches, I rolled out two double crusts worth of butter pastry and started chilling them as I turned my attention to the fruit.

I had brought home half a case of rhubarb – about two kilograms worth – and planned to turn it into pie. I washed and chopped it before adding brown and white sugar (forced rhubarb usually needs just half to two-thirds as much sugar as the outdoor crop), and arrowroot powder to thicken it, as well as ground cardamom, ginger, allspice and a couple of dashes of Angostura bitters.

The pies came out bubbling and properly sticky: pastel pinkish red except for the darker spots where the filling had caramelized on top.

I brought one of them to a dinner party last Saturday. All the eyes around the table popped wide when I brought it out.

“Where did you get rhubarb in March?” everybody asked.