My dream of April is one of rhubarb galettes, strawberries that taste like sunshine and shucking peas on the back porch. The reality of course is one that's far more grey and more freezer case than farmers' market.

That said, I conjure spring as best I can, with a dish that combines some classics of the season: lamb and peas brought together by an emerald green herb oil, against the milky softness of burrata. (And yes, I'm making it with frozen petit pois.)

The peas are barely cooked, then smashed with oil and lemon. They're the furthest from mealy or pallid as you can imagine, instead bouncily tender and acutely sweet. Dressed by the oil – which includes mint, a perennial partner to both peas and lamb – the peas have a grassy freshness and serve as both sauce and side to the meat. The idea is to have the peas and cheese cool, and then place the chops atop when still crackling with sizzle. Then, the burrata melts a bit, the peas warm in spots and the oil marries all. It is, in short, a very good way to ease the wait for sunnier days.

The recipe progresses in manageable steps, with few particulars to keep in mind. For the peas, if garden or shelling peas are in season and available to you, then buy and use the same day. For frozen, my aforementioned preference is for young peas, which are consistently flavourful and tender.

My sincere apologies for the multiple appliances employed here; neither does the other's job well enough to just use one and as my aim is to give you the best version of a recipe and its method, I endorse the use of both.

That said, I equally endorse cutting down on cleanup, so go forth confident in my blessing if you choose to keep the production to a singular electrical assistant.

When blitzing the herb oil, the best extra-virgin is of course a treat, but not essential, as the herbs might overpower its nuances. I'd advise an oil that tastes good on its own, rather than seeking out anything exceptional. Consider the herb quantities a loose guideline; I most often measure by handful, or by what's in the crisper drawer. The dill sprigs are included for their spindly prettiness more than their taste. Tarragon could neatly slide in instead.

Lift your winter blues with a bowl of hearty congee
March 14, 2018 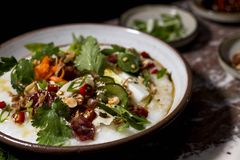 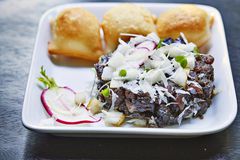 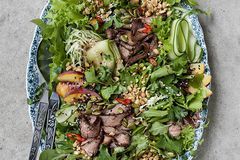