For every cook, there are “White Whale” recipes. Those perfect iterations of a dish that loom largely, persistently at the edge of our consciousness, a nagging presence of unfulfilled potential – the Moby Dick to one’s Ishmael, to explain the term.

A White Whale recipe is one that is unperfected and oftentimes inspired by a nostalgic ideal. There is a specific glee in the ability to conjure Proustian recollection with a single, replicable bite. White Whales are a personal pursuit.

Chocolate chip cookies were such an obsession of mine. A collection of years and about 700 cookies later (we kept a tally on the refrigerator door), I found my standard, as published in my cookbook.

That said, the seas are still fraught with other foes. White sandwich bread is one: fluffy like the packaged kind, but with a structured crumb that speaks to the homemade; not too rich, not eggy, not too cottony. Soft and perfect for toasting or not, for BLTs and PB&Js alike.

The pressed, pickled peppers our next door neighbour made when I was growing up is another. I’ve asked for the recipe, but it’s been lost to the ages, and a time before the internet. Those peppers were sweetly vinegared, with a purr of heat. They were staggeringly good on pizza.

Recently revisited on my list were pastéis de nata, Portuguese egg tarts. The simple tarts – plain custard baked in a multilayered puff pastry shell – got my attention years ago, at a mention from my father. Then, as my older son loves anything with custard, I made them a handful of times. None were sigh-inducing. They were simply fine and never better than quite good.

Fast forward to last month and an extended stay in Lisbon. A friend and I played Goldilocks with the versions of natas from six different pastelarias over five days. One was too greasy. Another, too bland. Another fine, but unremarkable. In that intensive research, it was devised that my ideal pastel would have a deeply flavoured custard. More egg than dairy, but still tender-set. I settled on tarts that were escuro, or dark, left to tan in the oven longer than others so the top is tortoiseshell-mottled. The crust should frill similar to crinolines, and fracture into gossamer flakes.

With every bite, I strategized making my own. Imagine the surprise upon returning home then, to unexpectedly find a recipe for natas in my mailbox, inside the pages of Breakfast: The Cookbook by Emily Elyse Miller. The sturdy tome covers the first meal of the day as eaten around the world; and tucked toward the end were egg tarts accompanied by um bica, a shot of espresso.

Miller’s version hits many of my listed requirements. They are baked at high heat so the filling soufflés, then falls, creating a distinct skin on the custard before it gives way to the smooth interior. That custard, built around a sugar syrup infused with both cinnamon and vanilla, has character beyond its richness.

As said though, White Whale recipes are unique to the maker. For me, I want a hefty pinch of salt in my custard, and even more vanilla. I am tempted to make my own dough for the shell, with cultured, European-style butter for that much more depth.

My quest might not be over, but it’s off to a good start.

Preheat the oven to 500 F with the rack in the top third of the oven.

Roll the puff pastry sheet to a 1/4-inch thick, 10-inch-by-15-inch rectangle. Roll it up from the short side into a tight log 10 inches long. Wrap tightly with cling film and let it firm up in the refrigerator, about 25 minutes.

Trim the uneven ends of the log and slice the log crosswise into 1/2-inch) thick disks. You should have about 18 disks. Roll each disk to about 4 inches in diameter. Grease 18 muffin tins or 18 egg-tart tins with butter or coat with cooking spray. Fit the dough rounds into the muffin cups and use your fingertips to work the pastry around the edges, just shy of the rim. Prick the dough a few times with a fork. Refrigerate the dough while you prepare the custard filling.

In a small saucepan, combine 4 tablespoons water, sugar and cinnamon stick. Bring to a boil over medium-high heat, stirring until the sugar is dissolved, about 1 minute. Remove the simple syrup from the heat. Scoop out and discard the cinnamon stick and stir in the vanilla extract. In a separate bowl, whisk the egg yolks and, whisking constantly, add the warm milk in a steady stream. Whisking constantly, drizzle in the simple syrup. Return the mixture to the small saucepan and place over low heat. Cook, using a spatula to stir and scrape the bottom of the pot constantly, until thickened to the consistency of heavy cream, about 4 minutes. Transfer to a liquid measuring cup with a spout.

Ladle the custard mixture into the shells in the tins, filling the cups about three-quarters of the way. Place the tins on a baking sheet to protect the bottoms of the pastries from burning. Bake for 10 minutes, until the custard is golden brown. Turn on the broiler to high and cook until the custard has caramelized and blackened in spots, 3-5 minutes. Allow the tarts to cool in the muffin tin for 5 minutes before transferring to a cooling rack. Cool for 10 minutes more before removing tarts from their tins. Dust with cinnamon and serve warm.

Adapted from Breakfast: The Cookbook by Emily Elyse Miller (Phaidon).

This take on Sloppy Joes embodies a new wave of modern Indian cookbooks
Subscriber content
May 1, 2019 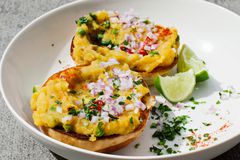 The nuts (and bolts) of alternative milks – and how to make your own hazelnut version
Subscriber content
May 3, 2019 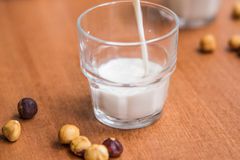 Cooking for one is an opportunity for creativity (like this fantastic stir-fried eggplant recipe)
Subscriber content
April 17, 2019 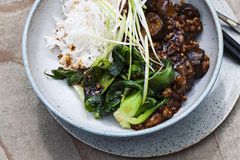