At Karat Chocolate in Kelowna, B.C., a three-month-old chocolate shop and patisserie, there are three cakes on offer on the day I pop by – two of them are cheesecakes. “We sell a lot of cheesecake,” says co-owner Vince LaPointe, as he serves me a slice of their pretty New York-style number with a yuzu gel topper and graham crust infused with honey from a local farm. “Ours is light; not heavy like a brick,” he says. As advertised, it’s firm but yielding, slightly sweet but also tart. It blends small-town feel with big-city attitude. Suddenly, reminding me of the contagiousness of people asking for Clamato juice on an airplane, everyone around me starts ordering cheesecake, too.

They’re not the only ones. From snaking lineups outside the Cheesecake Factory and Uncle Tetsu’s Japanese-style cheesecake shops every time a new outlet is born (there are eight Uncle Tetsu’s in the Greater Toronto Area, with new locations opening recently in Burnaby, B.C., and Montreal), to a Golden Girls-themed cruise set to sail from Miami in 2020 complete with cheesecake party; from all the people walking around Toronto gourmet grocer Pusateri’s eating Carole’s Cheesecake’s Stix to that viral InstaPot cheesecake recipe, the crave for cheesecake is real, and the dessert is back in a big way.

Cheesecake is borderless: Almost every culture has its take, from Greece’s myzithra cheesecake (made from farmer’s and ricotta cheeses) to Germany’s Kasekuchen, which uses quark cheese, and France’s decadent Neufchatel cheesecake. That said, there’s no cooler cut than a deft slice of New York-style cheesecake, for the nostalgia factor alone.

In 1872 dairyman William Lawrence figured out how to mass-produce cream cheese, which led to the invention of pasteurized Philadelphia Cream Cheese, which led to immigrant Jewry in Manhattan and Brooklyn bringing a taste of the old country to the new. Local Jewish delis, including Leonard’s, Lindy’s and Juniors, began selling the cheesy cakes during the 1920s. Then a Chicago baker named Charles Lubin, who owned a little company called Sara Lee, brought tasty cheesecakes into our homes in 1949. But cheesecake truly hit its stride in the 1990s, when the first Cheesecake Factory outside of Southern California was born, in Washington.

Alas, every decade has its dessert and in the intervening years the spotlight moved on to other meal cappers, such as molten chocolate cake, crème brûlée and cupcakes. Food trends are cyclical but today’s resurgence of cheesecake is a result of it being the dessert we need right now. Pure, simple, it’s deeply comforting.

Arthur’s, a newly opened restaurant in midtown Toronto that was inspired by life in 1950s and 1960s Manhattan, has New York-style cheesecake on its menu. Chef Tyler Shedden, culinary director for the restaurant, says he included it because it’s a classic, but updated the flavour profile – a caramelized white chocolate cheesecake with a passion fruit coulis and a graham crust – because while a classic is always timely, our tastes have grown more worldly.

Another reason why diners may be drawn to this dessert? It’s not deconstructed; it’s not multidimensional or texturally challenging. It’s just there: a welcoming triangle in the middle of the plate. The flavours are also familiar, which makes it just the type of dessert we need for these uncertain times.

This dessert is meant to impress the butter tart fans in your crowd. A butter-tart square recipe forms the base, and a maple and brown sugar cheesecake layer takes it over the top.

Preheat the oven to 350 F. Lightly grease the bottom and sides of a 9-inch round springform pan and line the bottom with parchment paper.

For the base, stir the flour, oats and brown sugar by hand in a large bowl. Add the melted butter and pecans and stir together until the mixture is rough and crumbly (like a fruit crisp topping).

Press into the bottom of the pan, bake for 12 minutes to set (it will not brown) and then let cool in the pan on a wire rack until room temperature.

Lower the oven to 300 F. Have the cooled butter-tart base at hand in its springform pan.

For the cheesecake filling, beat the cream cheese in a bowl using electric beaters, or in a stand mixer fitted with the paddle attachment, on high speed until fluffy. Add the brown sugar and beat well on high speed until dissolved, stopping to scrape down the bowl occasionally.

Reduce the speed to medium-low and add the eggs one at a time and then the yolk, beating well after each addition (and yes, scraping down the bowl). Stir in the pecan pieces by hand. Pour over the cooled butter-tart base.

Bake for about 1 hour, until the cheesecake jiggles in the centre but is set around the outside. (It will still look a little shiny on the surface at the centre.) Let cool in the pan on a wire rack for 10 minutes.

Carefully run a palette knife around the inside edge of the pan (this will prevent cracks developing as the cheesecake cools). Once the cake has cooled to room temperature (check by touching the bottom of the pan, not the sides), chill the cheesecake, uncovered, for at least 6 hours, or overnight.

To serve the cake, run a palette knife around the inside of the pan again and then loosen and remove the springform ring. Run your palette knife under the base of the cheesecake to loosen it from the bottom of the pan. Carefully slide the cake onto a serving plate.

Excerpted from Set for the Holidays with Anna Olson. Copyright © 2018 Anna Olson. Photography by Janis Nicolay. Published by Appetite, an imprint of Penguin Random House LLC. Reproduced by arrangement with the Publisher. All rights reserved. 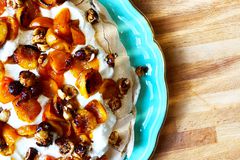 This savoury pear-and-sesame cake makes a perfect snack at any time of the day
September 5, 2018 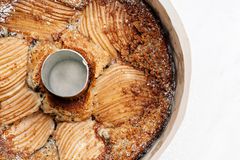 These decadent hand pies are the perfect marriage of plums and almond cream
August 1, 2018 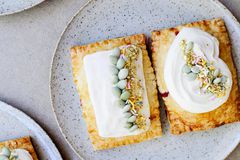