Frangipane and summer fruit is a storied combination – think of Bakewell tarts, with their layer of jam tucked between the almond cream and pastry below, or fresh fruit pies where the frangipane generously swells to embrace the filling.

Since it’s basically an uncooked almond pastry cream, frangipane is a dream to whip together. I most often make it by hand, skipping the washing up of a set of beaters or lugging out the mixer. To make it, beat butter with powdered sugar, almond flour, regular flour, then an egg and a most basic version is done. You now have a filling for croissants aux amandes as well as tarts and pies, or bostock, a personal weakness.

In the happiest of accidents, I had some frangipane lolling in the freezer right when plum season hit. Soon enough, roasted fruit met up with that frangipane in a pastry swaddle, and, upon baking, it puffed to delightfully rotund proportions. Since the plums were twice-cooked, they made for a dazzlingly concentrated pocket of lucent incarnadine against the smudge of creamy frangipane beneath.

The recipe for the plums makes a handful more than needed, because it seems nonsensical to roast any less, and often one or two halves emerge too juicily slumped to make a discrete filling. Serve the bonus fruit at breakfast over French toast, pancakes or yogurt; after dinner atop shortcakes or ice cream; or with a glug of cream all day long. Since firmer fruits will resolutely maintain their shape through roasting, they might not easily relinquish their stones before their time in the oven. In those cases, leave the pits where they lay, then extract once the flesh is yielding.

When bourbon isn’t in the cabinet, then rum, preferably spiced, will do nicely, or Pimm’s liqueur. Use the elderflower and blackberry version of the latter if you’re lucky enough to have a bottle in your possession.

The recipe reads long as there is a handful of components; divide the effort by making the pastry, plums and frangipane one day, and assemble and bake the next. Or, use a quality all-butter store-bought pastry to skip a step entirely. It is summer vacation, after all.

Zest from an orange, cut with a peeler into strips

Start by making the pastry. Whisk together the flour, sugar and salt in a large bowl. Tip the diced butter into the dry ingredients, tossing the chunks so they are dustily coated. Press each piece between thumb and fingers to flatten, until all have been smushed. In a one-cup measure, stir together the cold milk and vodka. Drizzle most of the liquid around the bowl with the flour and butter, then use a fork to incorporate. If pockets of flour look absolutely dry, pour a miserly drip of liquid to dampen. As the dough begins to come together, use clean hands to squeeze together clumps of the mixture until they hold, and pressing those clumps into any loose flour into the bowl. It is a pushing motion, of flattening and smearing the dough into the sides of the bowl, rather than a kneading one. Continue folding and pressing the dough until all dry flour is incorporated. At this point, the dough should be relatively smooth.

Shape into a rectangle, wrap tightly with plastic wrap and refrigerate dough for at least 1 hour and preferably overnight. The dough can be refrigerated for up to three days, or popped into a freezer bag and frozen for up to 2 months. Defrost overnight in fridge, still wrapped.

Make the frangipane by beating the butter in a medium bowl with a spoon or hand mixer until the butter holds a peak. Sift in the powdered sugar, fold to combine, then beat again. Sift in half the almond meal, fold, then sift in the remaining, along with the flour and salt. Stir in the seeds scraped from half the vanilla bean (reserving the pod and remaining seeds for plums), the almond extract and egg. Once creamy, transfer to a small bowl, press a piece of plastic wrap against the surface and refrigerate until cold, about 2 hours, or up to 3 days.

Preheat oven to 350 F (180 C) for the plums. Pour the sugar into a 9x13-inch baking dish. Scrape out the rest of the vanilla seeds, and rub into the sugar. Add the spent pod to the sugar as well. Toss the plums with the sugar. Pour in the bourbon and ginger syrup, if using, and tuck in the orange zest. Arrange the plums cut-sides down, and roast in the hot oven until the fruit is barely tender and the juices are bubbling, 15 to 20 minutes. Let cool slightly, then, using a slotted spoon, transfer the plums to a shallow dish. Pluck out the orange zest and vanilla pod and discard. Pour the juices into a saucepan and bring to a boil; reduce to ¼ cup (60 ml), then cool and pour over the plums. Cover the dish with clingfilm and refrigerate for at least 2 hours.

To assemble the pies, cut the cold plum cheeks lengthways, slipping off the skin, if desired. Beat the heavy cream into the egg, along with a heavy pinch of salt. Line a heavy sheet pan with parchment paper. Divide the dough into two pieces. On a lightly floured surface, roll one piece to a 6x12-inch rectangle. Cut into 8 rectangles, each measuring 3x4-inches. Repeat with the second block of dough, this time rolling the dough slightly larger, roughly 7x13-inches, and cutting 8 rectangles from that (these larger pieces need to be bigger to drape over the plums).

Leaving a border on all sides, spread a scant 2 tablespoons frangipane onto the centre of one of the smaller dough rectangles. Arrange two or three plum quarters atop the frangipane, depending on size. Brush a thin coating of egg wash around the border, then place one of the larger rectangles to cover. Use a fork to seal, then trim the edges if needed. Place pie on the prepared sheet pan. Repeat with the remaining dough, then chill the pies for 30 minutes. Keep the egg wash for glazing.

Preheat an oven to 425 F (220 C) with a rack set in the upper third, with a baking sheet or baking stone in place. Once the pies are cold, brush the top of each with more egg wash, and sprinkle with granulated sugar. Cut a small slit in the top of each pie to release steam while baking. Place the sheet pan onto the preheated one in the oven. Immediately turn the oven temperature down to 375 F (180 C) and bake until the pastry is golden and flaking at the seams, 30 to 35 minutes. Let stand 10 minutes before serving with whipped cream or ice cream. Alternatively, let the pies cool completely, then frost with a classic powdered sugar frosting and adorn with ground pistachios, candies and sprinkles.

This technicolour salad is perfect for a summer picnic
July 25, 2018 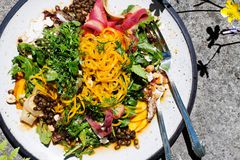 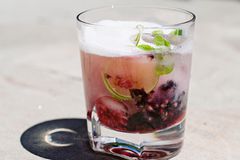 The arrival of summer calls for grilled tomatoes
June 13, 2018 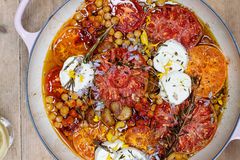