For their most recent cookbook, Emily Lycopolus and Danielle Acken spent over half a year travelling Canada’s Atlantic Coast, meeting and marvelling at the spirit and energy of the people who are nurturing the culinary renaissance sweeping the region.

They foraged for mushrooms and berries in Newfoundland, fished for sturgeon on the Saint John River in New Brunswick, watched the sun rise over oyster beds in Prince Edward Island, and saw it set on the acres of apple trees, laden with fruit, in Nova Scotia’s Annapolis Valley.

All the while sampling delicious food, listening to stories – and some tall tales – and making new friends with the army of farmers and artisan producers who are the soul of the region’s exciting culinary identity.

“In the countryside, seaside towns or bustling cities, there is just so much happening in Atlantic Canada,” says Acken. “Whether it is a meal in critically acclaimed restaurants, or bar snacks in local craft breweries, they all have the same starting point. They are based on traditional ingredients and time-honoured recipes that have been shared daily in home kitchens across the Atlantic region for centuries.”

The West Coast-based authors called the cookbook A Rising Tide, a nod to a well-used phrase in Atlantic Canada “a rising tide floats all boats,” the idea that together we are stronger than the sum of our parts. Everywhere they travelled, Lycopolus says, they saw signs of the community – young and old – working together to celebrate the region’s unique terroir, using produce they grow to create fabulous dishes that honour the past but are relevant to now.

It was also, Lycopolus adds, one of the most fun, and at times, eye-opening, experiences they’ve had researching a cookbook. Take, for example, their early morning fishing trip with the owners of Acadian Sturgeon and Caviar Inc. in New Brunswick.

“We went out in a 14-foot aluminum boat with the lead fisherman and his son at 6 a.m.,” says Lycopolus. “You can’t imagine how hard it was raining. They told us, ‘If you want to fish in this boat, you’ve got to start singing and they taught us this ridiculous sturgeon song. It’s the funniest thing that ever happened to me. Then, at 7 a.m., we were invited to enjoy 10 courses of sturgeon, including a soft-boiled egg and caviar, caviar with potatoes and crème fraiche, grilled sturgeon steak, a chowder, and sturgeon pâté. It was such a feast for breakfast and one of the most exciting and incredible meals we had the whole trip.”

The book has more than 100 inventive recipes, some created by the authors, and the rest contributed by local chefs, foragers, restaurateurs and fishermen. Each province has its own chapter with stories about the people they encountered along the way. “It is such a special part of Canada,” says Acken. “You come as a stranger and leave feeling part of a much larger family.”

Place all the blueberries in a large saucepan, drizzle with the lemon juice, and scatter half the zest over the top. Cover the pan with its lid, place over medium-low heat, and cook for 3 to 5 minutes, just to soften the berries.

In a small bowl or measuring cup, combine the sugar, cornstarch, and nutmeg. Sprinkle over the berries and stir to combine. Increase the temperature to medium-high and bring the berries to a boil, stirring well. Stir for one minute and then remove from the heat. Set aside.

Preheat the oven to 375 F. Grease a 9-inch square baking pan or a 2-quart baking dish with butter.

Divide the dough into four rounds, form each portion into a disc shape, and place in the prepared pan. Pour the blueberry sauce over the biscuit dough and sprinkle with the remaining lemon zest.

Bake for 20 minutes, until the blueberries are bubbling and the biscuits have risen.

Enjoy this warm with a scoop of ice cream.

The grunt will keep in an airtight container in the fridge for up to three days. 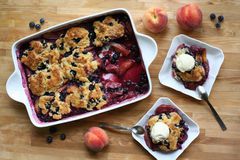 A sophisticated summer menu - with blueberry pie for good measure
August 14, 2012
Follow us on Twitter @globeandmail Opens in a new window
Report an error Editorial code of conduct
Due to technical reasons, we have temporarily removed commenting from our articles. We hope to have this fixed soon. Thank you for your patience. If you are looking to give feedback on our new site, please send it along to feedback@globeandmail.com. If you want to write a letter to the editor, please forward to letters@globeandmail.com.
Comments