There is an old Chinese proverb that says, “Food is bigger than the emperor,” which means, basically, that there is nothing of greater importance than food itself.

That is especially true this time of year as Asian communities around the world prepare to welcome in the Lunar New Year, a time of feasting and family and, as Toronto chef Trevor Lui puts it, “an excuse to eat even more.”

Lui grew up cooking in his family’s restaurant Highbell in Toronto’s Rexdale neighbourhood from the time he was seven years old, alongside his parents and grandparents. He has filled his debut cookbook, The Double Happiness Cookbook: 88 Feel-Good Recipes and Food Stories, with dishes that were handed down through generations and then customized to reflect his own experiences growing up first-generation Canadian.

“My food journey began in the kitchen of Highbell, and like many Chinese restaurants at the time, it was a bizarre mix of chow mein, chicken balls and banquet burgers,” says Lui, whose first restaurant, Kanpai Snack Bar, helped bring Taiwanese street food to Toronto. “It wasn’t until I was a teenager that I realized a banquet burger was not, in fact, Chinese food.”

The rich duality of his upbringing is reflected in the 88 dishes (eight is considered a lucky number in the Chinese culture). The Last Samurai, for example, which he introduced at the Canadian National Exhibition several years ago, is a culinary trinity of his favourite things: ramen, burgers and fried chicken. There is also guacamame, made with edamame, udon-stuffed meatballs and his re-interpretation of the classic comfort food grilled cheese, which he makes with a three-cheese blend (his mom used Kraft slices), gochujang paste, kimchi and Asian (or Bosc) pear.

Double Happiness, which means health and prosperity in the Chinese culture, is part-memoir and part-homage to the sacrifices his parents and grandparents made to ensure he and his sister had a better life. “For me, walking into a Chinese noodle shop and smelling congee – Chinese rice porridge – takes me right back to Sunday mornings in my mother’s kitchen.

“This book is about those impactful stories and the inspirations along the way that helped shape me and my culinary ambitions and identity,” Lui says. “I’ve never been prouder of my background, both my Chinese heritage and my Toronto upbringing. I live by it and I scream it at the top of my lungs. Food helped me realize this.”

Bring water to a boil in a saucepan over high heat. Add noodles and cook for 2-3 minutes, until softened. Drain in a colander, then rinse under cold running water.

Heat 2 tablespoons oil in a large wok or frying pan over high heat. Add pork and stir-fry for 2-3 minutes, until browned and cooked through. Transfer to a plate.

To the same pan, add cabbage and spring onions and sauté in the residual pork fat for 3-4 minutes, until cabbage is cooked through. Add the remaining 2 tablespoons oil and noodles and stir-fry for 5-6 minutes, making sure the noodles do not stick. Stir in pork.

Transfer to a serving platter and garnish with micro greens. Serve with sweet chili sauce on the side.

Excerpted from The Double Happiness Cookbook: 88 Feel-Good Recipes and Food Stories by Trevor Lui. Photographs by Suech + Beck. Copyright © 2020 by Trevor Lui. Excerpted with permission from Figure 1 Publishing. All rights reserved. No part of this excerpt may be reproduced or reprinted without permission in writing from the publisher

Bob Blumer’s creamy carbonara recipe is influenced by the tricks he’s learned from chefs around the world
Subscriber content
January 20, 2021 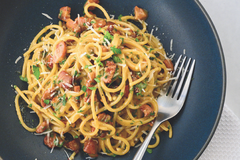 A butternut lentil soup recipe that can be enjoyed on its own or become the base of a robust dish
Subscriber content
January 11, 2021 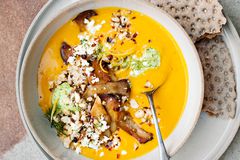 Take roasted vegetables to a new level with cheese sauce infused with garlic and thyme
November 25, 2020 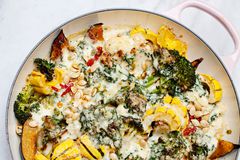