Brisket can mean different things to different people – barbecue enthusiasts, for example, wouldn't dream of eating the fatty piece of meat any other way than tenderized by a smoker, partnered with a dry rub and tangy sauce.

For our family, classic brisket is a braised cut of beef that is simmered with carrots and onions and served as a centrepiece at important gatherings – especially Rosh Hashanah, the Jewish New Year starting on September 20.

The smell of a brisket braising in the oven is the scent of home and tradition for many Jewish families.

But making one requires a fair amount of time and elbow grease. We wondered if we could simplify the process and decided to try it a number of different ways: in a slow cooker, pressure cooker and traditional Dutch oven.

Those who have been following the Waverman dynamic may recall that Emma considers the slow cooker an inferior cooking tool but is willing to use it because it takes the stress out of dinner.

Over the past year, she has become slightly evangelical about her Instant Pot, a techy pressure cooker that heats food to a higher temperature than the slow cooker. Because it has a stainless steel interior, food can be sautéed in it, creating more browning and caramelization.

The challenge this week was to compare three briskets each made with a different method. We weren't surprised that traditional braising won out on taste, but the Instant Pot was truly a close second.

Unfortunately for slow-cooker enthusiasts, that brisket paled in comparison to the other two – the flavours were not as balanced and intense, and the texture was a bit soggy. The meat was quickly re-purposed for soup.

Don't wait for a special occasion to make a brisket. It's a one-pot dish that tastes better as leftovers and can be a family tradition any day of the year.

The slow cooker may be the easiest way to go but the results were our least favourite. It's a practically hands-off task, but the braising liquid is thin and almost flavourless, the vegetables are left tasteless and the meat was soggy.

The Instant Pot is the fast method, taking just an hour and a half. One great feature of this appliance is its sauté setting, allowing you to brown the brisket as you would in a pot on the stove. Once the meat is tender, use the sauté setting again to reduce the sauce until thickened and concentrated. The meat had some browning and was the second most tender. The sauce had lots of flavour once reduced and the vegetables were tender and had some flavour.

The classic method of browning on the stove and braising in the oven delivers the most delicious results. The sauce was thickened and concentrated, and the meat was well browned and extremely tender. This brisket was hands down our favourite.

1 head garlic cut in half

Combine mustard, soy, thyme and pepper. Sprinkle salt over the brisket then brush with marinade. Broil the fat side of the brisket until it becomes nice and brown. Place half of the onions and carrots and all of the garlic on the base of the slow cooker. Top with brisket. Cover with remaining onions, garlic and carrots. Add stock and canned tomatoes. Stir in vinegar and chili flakes. Cover and cook on low for eight hours.

Combine mustard, soy sauce and thyme in a small bowl.

Season brisket with salt and pepper and brush lightly with mustard mixture.

Heat oil in Instant Pot on sauté setting, uncovered. Add brisket and cook until golden brown, about 4 minutes per side. If the brisket is too big to brown, cut it in half. Remove to a platter.

Add carrots and onions to Instant Pot and sauté until onions begin to soften, scraping up browned bits with a wooden spoon, about 2 minutes. Stir in garlic.

Set Instant Pot on manual for 60 minutes. After 60 minutes, release pressure naturally, about 15 minutes, then turn valve to “venting.”

Carefully remove meat and vegetables to a platter and keep warm. Set dial to sauté and simmer liquid until reduced to 3 cups, about 15 minutes. Slice brisket and serve with vegetables and sauce.

A heavy cast-iron enamel Dutch oven is the best for this.

Combine mustard, soy sauce and thyme in a small bowl. Season with salt and pepper. Brush mustard marinade over brisket. Heat 2 tbsp oil in Dutch oven and brown brisket on both sides (or broil). Add onions and carrots to casserole and sauté for 1 minute. Add brisket and stock and tomatoes. Stir in vinegar and chili flakes. Bake covered for 5 to 6 at 275 F hours or until fork tender.

- For a truly tender brisket, get a double, which has a thicker end and more fat.

- The easiest way to remove the fat is to make the meat the day before serving and refrigerate in broth overnight. Remove any fat and slice the brisket while cold, then return to gravy to reheat for 30 minutes in a covered dish on medium-low heat or until bubbling. It can also be reheated in a slow cooker.

- A large brisket can easily serve a dinner party, but the best part is the leftovers. A brisket sandwich on thick pieces of challah smothered in gravy is the obvious choice. Adding brisket to a simple fried rice, beef and barley soup or a tomato sauce for mock Bolognese is a great way to use up extra meat.

- If you like a glaze, remove the brisket after cooking, and brush on a mixture of 2 tablespoons maple syrup, 1 tbsp Dijon mustard and 1 tablespoon Sriracha. Bake for 30 minutes at 350 F. Slice the meat and return it to the sauce. This gives an added layer of flavour but isn’t entirely necessary. 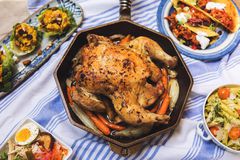 How to turn the veggies in your fridge into a dinner party-worthy meal
May 29, 2017
Recipe: Middle Eastern chicken with lemon garlic sauce
May 8, 2017
Follow us on Twitter @globeandmail Opens in a new window
Report an error Editorial code of conduct
Due to technical reasons, we have temporarily removed commenting from our articles. We hope to have this fixed soon. Thank you for your patience. If you are looking to give feedback on our new site, please send it along to feedback@globeandmail.com. If you want to write a letter to the editor, please forward to letters@globeandmail.com.
Comments