At the first twinge of a sore throat, sniffle or congestion, I go on the offensive. My inclination is not to soothe a cold, but rather blast it out of my system with an attack of ginger, garlic, citrus and chiles – an all-out onslaught in the form of heat, acids and intense flavour.

A recent addition to my rotation of spicy soups that fulfill this purpose is a version of kimchi jjigae, the Korean stew of kimchi, tofu and pork or seafood. While not wholly traditional, this one is a taste-bud-sparking bowl that rouses the senses out of any illness-related fog. Served as physically hot as you can muster it feels particularly life-restoring. (Classically, the stew is cooked directly in its serving dish, an earthenware bowl called a dolsot – the same used for bibimbap.) Still, the stew isn't as incendiary as one might expect. The chile heat is a buzzing back note, while the overall effect is one of essential savouriness, made lush with tofu and surprisingly balanced.

The stew can be simple or as involved as you'd like. The method is nothing much more than adding things to a pot then leaving it to mellow and burble for a while on the stove. My ingredient list reads long as this is my perfect case scenario, but many kimchi jjigaes are quite clear and straightforward, starting with only water and kimchi. The latter, when aged properly, has enough presence for the entire production: When purchasing, choose one that has a deeply developed sour funkiness, rather than brash heat alone.

Pork kimchi jjigae often starts with pork belly, however, when sick, I regularly use ground pork in its place, as it's simply easier to source on short notice and takes far less time to marinate. Use the belly if inclined: remove the rind and thinly slice the strata of meat and fat or chunk into smallish cubes, and siphon off some of its fat if you want, but stop short of omitting the butter as it helps emulsify the broth. Marinate it for an hour.

If using truly soft tofu, sundubu, spoon it into the bubbling broth rather than slicing, for an appealing rusticity. I like to fill my stew with vegetables, leaning toward those that go supple when cooked, such as mushrooms and greens. Another potential addition: lower one egg yolk per person into the roiling broth right before serving, with the yolk presented as an undisturbed puddle. The yolk bolsters the insulating effect of the stew, something to keep in mind for the cold nights ahead.

4 baby bok choy, cut lengthways into halves or quarters, depending on size

In a bowl, combine the pork, doenjang, garlic, ginger and tamari. Using clean hands, mix the seasonings into the meat. Cover and set aside at room temperature for at least 15 minutes, or refrigerate for up to an hour. (If you haven’t got doenjang, use additional gochujang instead.)

Set a heavy-bottomed pot over medium-low heat. When warm, add the marinated pork. Once the fat begins to render, about one to two minutes, increase the heat to medium-high. Cook, stirring often with a wooden spoon and breaking the pork into crumbles, until the meat is crackling and beginning to brown, five to seven minutes. Stir in the onion and continue to fry until the onion is translucent and the pork has a good amount of colour, five minutes more. Scrape in the gochujang and cook for 30 seconds, pushing it against the bottom of the pot with the back of the spoon. Sprinkle on the gochugaru, and do the same. Tumble in the kimchi and cook for five minutes, stirring all the while. Pour in the stock, water and shiitake. Bring to a boil, then simmer for 25 minutes. Add the tofu, bok choy, and enoki. Gently tamp down the vegetables, and add extra water if necessary to keep everything submerged and moving. Leave to bubble for 15 minutes more. Turn off the heat, carefully stir in butter.

Season with more soy if needed, then serve with green onions, sesame seeds, and cooked rice. 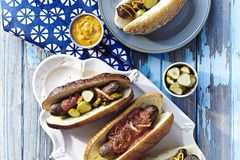