Any bar crawler who has ever ended a long night at a Chinese restaurant with an after-hours teapot of beer will appreciate the ingenuity of Bambudda's Budweiser-syrup-based Tsui Hang cocktail.

This sleek Gastown restaurant is the latest addition to Vancouver's growing genre of modern Asian restaurants. Similar to Bao Bei, Bambudda is a dark, sexy room with red lanterns hanging from the ceiling. Much like Maenam, the restaurant serves excellent cocktails and offers fine-wine pairings with its shared plates. And in the same vein as Vij's, the kitchen riffs off traditional dishes – primarily Cantonese dim sum – with clever twists and local ingredients.

Take the divine law bak go, for instance. It's hard to improve on this classic dim sum cake made from rice flour and grated radish that are cut into slices and pan-fried to a melt-in-the-mouth consistency. But executive chef Keev Mah very cleverly steams the cake into pillowy blocks that are lighter than the often-dense original. Instead of mixing the batter with barbecue pork, he places a thin roll of pepper-crusted smoked brisket over top and adorns it all with deep-fried shallot ring for crunchy texture. It's so smart and sinfully delicious.

Mr. Mah isn't a local kitchen celebrity. Prior to this, the soft-spoken, Malaysian-born cook worked at Circa (now closed) and Hy's steakhouse. But I once met the self-described food nerd at a spicy Sichuan food-bloggers dine-around, and was awed by his vast knowledge of regional Chinese cuisine and familiarity with obscure holes-in-the-wall.

Owner Ray Loy is a more recognizable fixture, having worked as a server at Five Sails, Joe Fortes, C Restaurant and most recently, Market by Jean-Georges. Raised in Strathcona (on the edge of Vancouver's Chinatown) and well-travelled in Hong Kong, he describes Bambudda as the natural extension of his various influences at home and abroad.

Almost every dish has a story behind it. The Chinese oysters, for example, are a play on the traditional Cantonese preparation of scallops. The oysters are gently braised to a slight puff and placed back in the shell over a bed of glass noodles that soak up all the brininess. A touch of black-bean sauce has a subtle ginger kick that enhances, but doesn't overwhelm, the shellfish.

Chicken skin doesn't seem very Chinese. But think of Peking duck. These crackling, oven-roasted wafers have a similar texture. A lime wedge crusted in salt and pepper is what really elevates this dish to a new level. When you squeeze the zesty juice over the skins, it leavens the fattiness, brightens the palate and motors your taste memories back to Vietnam, where lime-and-pepper dipping sauces are served with every meal.

Wood ear mushrooms tossed with ginger scallion and sesame oil is more typically Chinese. And here the salad is served cleaner than in a traditional Cantonese restaurant, where it often dressed with MSG or chicken-bullion powder.

Other dishes are less successful. Barbecue pork buns start with a beautifully fluffy bun, made in-house. But the pulled-pork filling (a modern twist on diced barbecue pork) is overblown, gummy and mixed with a foul liver pâté that overwhelms with its gaminess.

Tea eggs are four tiny quail eggs poached in black oolong tea, sprinkled with smoky Chinese ham and tangy slivers of black olives. It would be a lovely contrast in textures and flavours if it weren't all overpowered by industrial-tasting truffle oil. When will this noxious ingredient be banned? I keep hoping.

When Bambudda opened last summer, the kitchen offered only small, dim-sum-style plates. It should have stuck to the original plan. The new large plates fall short.

Steamed fish can make or break a Cantonese restaurant. This cod, slightly overcooked on the edges and swimming in salty soy sauce, doesn't pass the test. Tempura-fried fish mousse (a nod to traditional fish balls) is wrapped in nori, which merely absorbs the oil in a greasy sponge.

Hanger steak presented on a sizzling platter could be an interesting twist on teppanyaki, which was very popular in Hong Kong cafés during the seventies when Mr. Loy was growing up. But the way it's served here, splashed with chili oil on a bed of caramelized onions, is again overly greasy. A side order of rice is overcooked and mushy.

Even in a bad Cantonese restaurant, the plates are refreshed between every course. At Bambudda, we had to ask twice for clean plates. More attention to the small details would help.

Fabulous cocktails, mind you, more than made up for slack service. Created by Buck Friend, a former bartender at Maenam, the Tsui Hang tea is truly inspired. Though the Dark Horse rye, infused with salted plums, goji berries, allspice and star anise, sounds almost scarily bold, the slightly sweet elixir has a clean, lemony finish that pairs perfectly with this food. Served in a teapot with oversize ice cubes, it stays as fresh and cold as a frosty beer.

Bambudda isn't the best modern Chinese in Vancouver, but it's smarter than most. You don't need to know the background of every dish to enjoy it, but it is fun for the foodies guessing. If the restaurant sticks to small plates, it could settle into a very delicious niche.

*Good, but won't blow a lot of minds

**Very good, with some standout qualities

***Excellent, well above average with few caveats, if any.

Stuff your guests with a multi-fowl mash-up
October 4, 2013 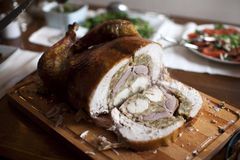 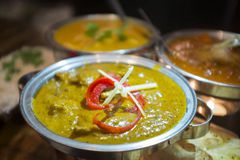 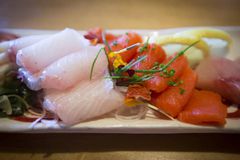 Review
This glossy restaurant is out to wow you
August 23, 2013 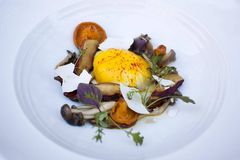 Salt, garlic, or honey? The Scout List is well-seasoned this weekend
August 21, 2013 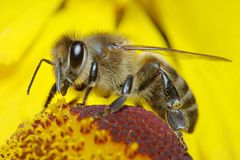