Alexandra Gill
Vancouver
Special to The Globe and Mail
Published May 9, 2021 Updated May 9, 2021
For Subscribers
Comments
Text Size

Last Sunday, I unfurled a blanket on a small, sandy cove at the edge of Stanley Park and sat down to a picnic with two girlfriends. Both of them live alone and have been part of my tight bubble since the start of the pandemic.

We uncorked a bottle of Invinity Blanc de Blancs, a traditional method fizz from the Saanich Peninsula on Vancouver Island, where the pinot gris, ortega and siegerrebe grapes are serenaded with classical music in the vineyards.

We nibbled on (surprisingly good) vegan burger patties from Costco.

And we basked in the warm glow of a portable fire pit hooked up to a 20-pound tank of propane, which we had carted down to the beach on a trolley.

Anticipating another long summer of outdoor socializing, my friends have jointly invested in the somewhat cumbersome yet immensely soothing lifestyle accoutrement. All of us live in small rental apartments. The park is basically our backyard. Why shouldn’t we enjoy the great outdoors in the comfort and style afforded to more fortunate property owners?

It was all so very civilized, until a rowdy crowd of pot-bangers converged further down the beach at English Bay. We weren’t sure if they were anti-mask protestors or the climate-change activists who had blockaded the Granville Street Bridge all afternoon.

We blithely ignored them and actually felt a small sense of relief. If there were any park rangers roaming the seawall on their ATVs that night, they’d have more important things to deal with than busting our cozy little gathering for the illegal consumption of alcohol.

Contrary to popular public opinion, drinking outdoors in parks is still not permissible in Vancouver.

The regulations could change, perhaps as soon as this week. On April 29, the provincial government introduced a bill to amend the Liquor Control and Licensing Act, which would authorize the Vancouver Park Board to implement a plan, approved last summer, to allow booze in 22 parks and beaches around the city.

The motion is expected to pass as soon as the legislature finds time to debate it. The NDP government is supportive. Last summer, in fact, Attorney-General David Eby offered the Vancouver Park Board a “workaround” that would have been faster than a change to provincial legislation. The Park Board declined.

But it’s still not clear whether the little stretch of sandy beach on which my friends and I enjoyed our picnic would be included as one of the designated sites in the Park Board’s plan.

Much like the City of Vancouver, which only allowed BYOB alcohol consumption in four of its seven pop-up plazas last summer, the Park Board pilot project will come with restrictions.

It appears the powers-that-be would rather squeeze us into tight outdoor spaces with proper supervision and access to public washrooms than treat us like adults and allow us to roam – somewhat counterintuitive in the time of COVID-19.

So while the lucky residents of Port Coquitlam and North Vancouver, where drinking in public parks has now been made permanent, tip back their chardonnay and hazy IPAs without fear of repercussion, here in Vancouver we still wait, while hiding our bottles under blankets, and confusion abounds.

The confusion is understandable. For all the great liquor-law liberalization measures ushered in by the pandemic – and there have been many, including wholesale pricing for hospitality licensees, the ability to sell alcohol with takeout or delivery meals and expedited patio approvals – there are still some grey areas and room for improvement.

Restaurants and bars in B.C. are allowed to sell sealed bottles of wine, beer and spirits as off sales. It’s a nice convenience for customers, but not terribly enticing because most of the products (save for the odd exclusive wine, known in industry parlance as “spec” items) are readily available at private and government liquor stores for the same price or less.

Some bars, such as The Chickadee Room in Chinatown, have gotten creative by packaging full bottles of spirits into cocktail kits that come with juice, syrups, garnishes and step-by-step instructions.

Bar manager Sabrine Dhaliwal says the kits are selling okay – about 25 a week – but hardly making a big difference to the bottom line.

The kits are a nice gift idea, or a splurge for special occasions. But again, they’re not terribly appealing to consumers. We still have to make the drinks ourselves. It’s a big investment, even at $50 for a half kit. And we can’t exactly cart them to the beach and shake them surreptitiously.

It’s perfectly legal. It’s convenient. And I’m sure the slushies are tasty.

But why not just let bartenders do what they do best – create beautifully crafted cocktails with precision and rare ingredients – while offering discerning drinkers a scarce commodity, in accessible portions, which they can’t easily replicate at home?

In Ontario and Alberta, bars and restaurants have been allowed to sell bottled cocktails to go for months. They’re selling like hotcakes. There have been no reported issues around tampering or safety. Their worlds have not collapsed into chaos. Well, at least not in relation to the cocktails.

Jeff Guignard, executive director of the Alliance of Beverage Licensees of B.C., says the provincial government is actively looking at an industry proposal to allow takeout cocktails and he expects a decision soon.

Over at The Chickadee Room, Ms. Dhaliwal says she’s ready and waiting. With the assistance of Bacardi Canada, which has provided a portable canning service to bars worldwide, she has created Jukebox Hero, a lightly carbonated gin and elderflower elixir made with shelf-stable citric acid in place of juice.

For now, they can only sell the canned drink on the patio at Juke Fried Chicken, another sister restaurant next door.

When and if the laws change, I’ll be first in line to crack one open. Preferably on a beach, if allowed. 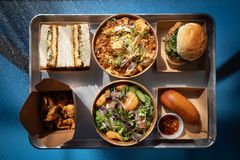 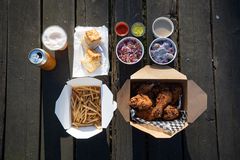 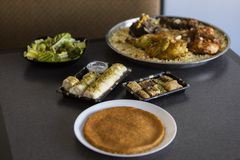