I am by no means a beer nerd, but it is easy to identify Dandy Brewing Company as one of the leaders of the brewing pack in Alberta. There’s plenty to choose from these days, but the owners at Dandy have done an impressive job of balancing street cred in the beer community while becoming one of Calgary’s most recognizable smaller-scale brewers. No small task when it comes to the province’s arguably over-populated brewing scene, I assure you.

Having said that, it’s probably not surprising to many to hear that the majority of brewery taprooms and brewpubs in Alberta – and most across the country – serve less than spectacular cuisine.

Why is that? Let’s be honest here, it’s the craft beer connoisseurs’ world these days and we’re just living in it. As well, since most breweries and brewpubs are (clearly) owned by beer fanatics, food is often a secondary focus.

One local brewery sets the culinary bar low in an inviting way by allowing patrons to order food from other establishments and finds its mass appeal with its hodge-podge interior and the admittance of dogs. It’s not known for its brew quality, but enjoyable nonetheless. Another – in the city’s Beltline neighbourhood – finds its stride with a slick interior, informed service and quality sudsy concoctions on tap, but falls horribly flat when it comes to its food menu.

Dandy pleasantly lies somewhere between these two examples and truly offers some of the best taproom cuisine I’ve enjoyed in recent months in Western Canada. Its fairly minimalist room, a relatively small former automotive garage-turned-brewery, boasts an especially unique art installation of illustrated wood cuts that provide an illusion of glowing fluorescent orange from behind when the light hits them.

When it comes to the food – which arrives after you’ve begun sipping on interesting beers, such as their refreshingly puckering plum sour or the tropical-tasting wild sour ale – you can tell almost immediately that chef Merritt Gordon has experience well beyond that of the typical pub chef. A gigantic schmear of wonderfully smooth chicken liver mousse on toast topped with pickled onions and chives made for an indulgent start to a casual dinner with friends on a summer night earlier this month.

The richness continued by way of a Welsh rarebit, served in the form of a thick piece of Texas toast with an ale-infused mornay sauce that was purposely broiled to near burnt on top. Definitely not the most lovely plate of food to look at, but undeniably and humbly delicious.

A fairly classically prepared and satisfactory tartare followed, but was quickly eclipsed by the Dandy hot dog which, in my opinion, is the standout dish on Mr. Gordon’s menu. All hot dogs are not created equal and that is evident here with this big, juicy dog in a soft bun, topped with plenty of daikon, onion slaw and fried shallots. One might wish that the small bowl of house pickles on the side were served as more of a relish, to enjoy their salty, tartness bite-by-bite with the Dandy dog, but let’s chalk that up to more of an observation.

Over the lunch hour, the taproom boasts a menu with subtle differences. Most notably, the slightly misleading hot chicken sandwich. Without clarification from the server, it is easy to assume that this “hot chicken” would be of the fried Nashville variety, the food trend that is currently sweeping North America after being highlighted on David Chang’s most recent Netflix series, Ugly Delicious. As food trends can be a bit, well, trendy, to see a gravy-smothered roast-chicken sandwich topped with a pile of peas was actually happily misleading, although not necessarily what I’d like to eat on a hot summer’s day.

Dessert also gratifyingly surprises in the form of a light sponge cake layered with cream and a chunky strawberry jam of sorts, save the unnecessary addition of a muted basil-infused finishing oil, not boasting as much freshness as fresh, torn basil leaves might have happily provided.

Where Dandy falls short for me is in its service and its atmosphere. When the room is full, it is terribly noisy. At one point during my first dinner there, I remarked to one of my friends how loud it was in the taproom and she responded by leaning in and saying: “What?” at a fairly high volume.

On both occasions, service started out clunky and slow, and menu recommendations or suggested beer pairings were never offered. In addition, both at lunch and dinner, servers seemed to forsake our table, leaving us to go to the counter to request the bill. Perhaps that’s the standard format here, but neither time was it explained.

These sort of service issues make me wonder why they have chosen to put so much thought into their food program. If the people on your main lines aren’t communicating your concept correctly, it will always feel somewhat disjointed.

In other words, dining here is almost dandy, but not quite. 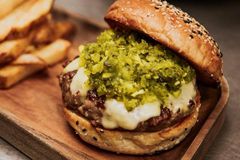 Review
Calgary’s Katsuten is a diamond in the rough
Subscriber content
June 16, 2018 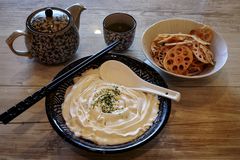 Prairie food producers in a league of their own
June 4, 2018 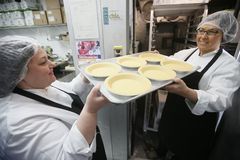