Growing up in Saskatchewan, perhaps not surprisingly, I didn’t know much about Filipino cuisine. The lone exception was ube, the intensely purple yam that’s ever-so-prominent in desserts. In high school, I remember occasionally getting to grab a piece of ube off the kitchen counter at a friend’s house when we’d hang out after school. To me, it was novel, to her and her family, it was tradition.

As I grew up, I began to find my interest piqued by all sorts of international cuisines and specifically Asian ones. The intoxicating sting of a fresh Thai chili, the sweet and salty balance inside of a tender barbecue pork steam bun, the aroma of a piping hot bowl of pho … all of these things made me want to eat more, discover more. For whatever reason, Filipino food always remained on the periphery.

Most Canadian cities boast a notable Filipino population, but that doesn’t always translate to a Filipino cuisine permeating a city’s food scene and even less-so, a contemporary one. In more recent years, cities such as Toronto or Montreal have seen chef-driven Filipino restaurants arise (Lamesa and Junior, respectively), but this kind of approach is not really found in the Prairies. Edmonton’s Kanto 98 St. Eatery has changed that.

Dubbed as a Filipino street-food restaurant by owner Edgar Gutierrez, Kanto is a fast-casual spot in the heart of Chinatown that offers a new take on the international cuisine. Mr. Gutierrez is most well-known as the executive chef of Edmonton’s premier Mexican concepts, Rostizado and Tres Carnales, but Kanto is the chef’s first solo venture and it truly feels like a labour of love.

Tucked into a small, narrow space, the restaurant would be very easy to stroll right by if it weren’t for the typeface above the door that looks as though it was lifted (in homage, of course) from a Filipino comic book. Once inside, you’ll see that that was likely the case as the tight space, which seats about 16 people, boasts a large mural of cartoon characters famous in the Philippines.

Mr. Gutierrez, who was born in the Philippines and immigrated to Canada in his youth, has created a menu that offers up some colossal flavours. It’s the kind of food that is sticky, salty, sweet and moderately messy at times, but leaves you grabbing yet another napkin to clean yourself up and go in for another bite.

Most dishes here are either skewered, such as juicy chunks of pork marinated with sinamak (spiced vinegar) and then grilled with an appropriate char or served in bao form, such as the karabao. A trio of steam buns are stuffed plentifully with tender and tangy braised Alberta beef, sauced up with a sweet tomato purée, pepper aioli and topped with crispy shallots and shredded keso, a Filipino cheddar cheese.

The fried chicken here, which comes either à la carte or on top of spaghetti, is brined and lightly battered –and some of the best you can get your hands on in Alberta. A pairing of fried chicken and spaghetti might sound unusual, but it is Mr. Gutierrez’s ode to the famous Jollibee fast-food chain that is wildly popular overseas and can now be found in Winnipeg and Toronto.

An interesting and unusual component to most will be the tomato sauce on the pasta, which borders on the sweet, and you’ll also find slices of wagyu beef hot dog intermingled, but it is perplexingly delicious. A sweet-and-sour glazed spaghetti, if you will.

As indulgent as all of these dishes sound, there is some lighter fare to be had here, such as a poke bowl – which I did not try, as I’m more than over poke bowls these days – and an interesting kale-and-bok-choy salad that was topped with plenty of crispy whisps and toasted nuts, but was lightly drizzled in a coconut-lime dressing. A properly dressed salad would have been a nice balance to the lineup of rich creations.

Halo-halo is the only suitable way to end a Filipino meal. There are so many shapes and forms this iconic dessert can take, but on this particular day, it was built in layers of crushed ice interspersed with cheddar ice cream, dulce de leche, beans, coconut jellies, corn kernels and much more. If you don’t have a different bite every time, then you’re not doing halo-halo right.

Admittedly, there is so much more about this kind of food that I need to learn, but if anyone unfamiliar with this type of cuisine is looking for a breakthrough point to become entranced by it, Mr. Gutierrez’s cooking at Kanto is certainly the right place to begin.

Review
At Vancouver’s BREWHALL, flexibility is the name of the game
September 26, 2018 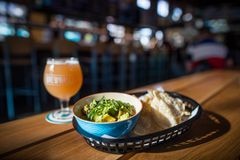 Review
With excellent food and first-rate service, Alo Bar rises to the top of the Yorkville heap
September 26, 2018 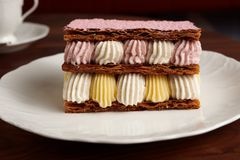 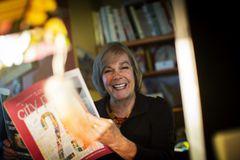