The 20-course tasting menu at Published on Main is a tour de force that begins with a blaze of nine dainty snacks dazzling the table all at once.

Somewhere between the first bite of puffy Aebleskiver stuffed with stewed herbs and the final spoon of aerated hay custard nestled in green apple ice – every elaborately turned plate plumed with petals, jewelled with gels or swirled with brightly infused syrups, butters and vinaigrettes – I became convinced that Gus Stieffenhofer-Brandson and his talented brigade are cooking some of the finest food in Vancouver.

This ambitious new restaurant has much to commend: a handsome room finely finished with dark paneling that makes this bohemian stretch of Main Street look all grown up; creative cocktails that deftly combine mushroom syrup and pickled spruce with cedar-infused rye; a low-intervention wine program offering interesting discoveries for hipsters and traditionalists alike; and, hands-down, the most innovative brunch in town.

But by the end of the night, I couldn’t help feeling like the last first-class passenger on the Titanic, waddling out of an empty dining room after everyone else had jumped ship.

“I’m leaving now,” the server announced about 45 minutes into our two-and-a-half-hour meal.

“Got to go,” the chef needlessly informed, when setting down the grand finale of three desserts.

We were left in the extremely capable hands of a server named Aaron, who could probably run circles around this frequently bumbling floor. But why wasn’t he assigned to our table from the beginning? And couldn’t the rest have just slipped out quietly?

I’m not oblivious to the extreme difficulties under which restaurants are operating these days. And I wouldn’t usually sit down at 8:30 p.m. for a 20-course tasting menu (a terrific value at only $95, by the way). But it was Friday night and we’re living in the middle of a pandemic. I thought I was doing my bit to help maximize capacity by booking the last reservation, which all restaurateurs are beseeching customers to do.

So why was I made to feel like a boorish guest who had overstayed their welcome on two separate occasions?

I don’t think it’s me. I think maybe this restaurant – which also offers 30-plus constantly changing dishes on the à la carte menu, plus takeout, plus brunch, plus a series of Sunday dinners with guest chefs – is just trying to do too much.

“We only have one shot,” Mr. Stieffenhofer-Brandson explained, when I asked why he didn’t scale back the menu after reopening in June.

“I’m not a big ego guy, but I want this to be the best restaurant in the city.”

Published on Main opened in late December and the early reviews were ecstatic, rightly so.

The food – globally inspired, locally rooted, creative, contemporary and profoundly personal – is quite unlike anything else in Vancouver.

At first glance, the menu appears Nordic, with its heavy emphasis on foraging and fermentation. Mr. Stieffenhofer-Brandson, who spent a formative summer working at Copenhagen’s world-renowned Noma, picked most of the wild mushrooms featured on the fall menu, which include juicy white chanterelles in smoked celeriac and aromatic matsutakes shaved raw over wagyu carpaccio dotted with funky sesame-ginger miso.

But it’s also influenced by the Manitoban chef’s German heritage and his first stints abroad, before he moved here to apprentice with Scott Jaeger at The Pear Tree.

The tasting menu’s smorgasbord of six to eight main courses usually begins with marrow-dumpling soup, a thick, glossy beef-shank broth that his grandfather used to make at Christmas.

If you go for brunch, don’t miss the sensational dark and seedy rugbrod served with schmaltz or the terrific schnitzel eggs benny.

But what really stands out is the exquisite balance in every bite, especially those incorporating extreme flavours that might be jarring with fewer tweaks and less finesse. Pickled roses on a kanpachi dish, for instance, could have tipped into pot pourri territory if they hadn’t been pulled back with ponzu. Fermented red currants for dessert were almost unbearably bitter on their own, but gorgeous when combined with caramelized yogurt.

The cooking is experimental, yet accessible. Painstakingly detailed, but not precious.

The sheer enormity of trying to be both a destination and casual neighbourhood eatery puts a tremendous, almost unreasonable, amount of pressure on an already shaky front of house.

On my first visit, there was a cluster at the front door (before masks were mandated indoors). It took five minutes before we were offered water. The tables were set with sharing utensils, though not enough. Side plates weren’t replaced between courses. Drinks were poorly paced (on both nights). And the room has too many blind spots as evidenced by the number of customers waving wildly for attention.

Brunch went much smoother, which makes me think a smaller, more streamlined menu might help.

But there’s really no excuse for allowing the entire kitchen crew to congregate on the sidewalk, where they all piled into a convoy of cars as we sat in the front window finishing our final courses.

A little later, as we saw ourselves out, my dining companion wondered why no one was standing at the front door.

That would be difficult, I said, nodding to our server, who already had her boots kicked off and feet propped up on the bar stools.

Yes, times are tough. But even in the age of COVID, that’s not cool – especially not for a restaurant that aspires to be the best. 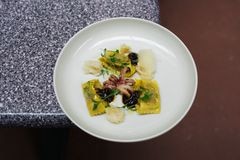 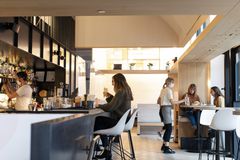 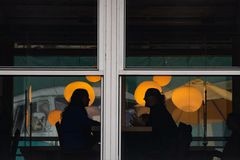