Alexandra Gill
Vancouver
Special to The Globe and Mail
Published May 23, 2021 Updated May 23, 2021
For Subscribers
Comments
Text Size

British Columbians are wild about spot prawns – now more than ever, thanks to a confluence of pandemic-related factors that have made them easier to buy and enjoy here at home.

This year’s season opened on May 14 and day-boat sales are hopping, especially in Steveston, where 10 commercial fishing boats now sell live prawns straight from the dock. Last year, there were four boats servicing the Fisherman’s Wharf. In previous years, there were one or two.

Across the province, fishermen and retailers are selling directly to consumers through online sales, home delivery and pop-up markets outside restaurants and in parking lots.

The domestic sales have become so fine-tuned, some retailers such as Fresh Ideas Start Here (F.I.S.H.) now enable you to preorder your spot prawns to specification: alive and whole, with heads and tails separated, or just the tails.

These jumbo crustaceans, sustainably harvested and only available live for a short four-to-six-week window, are world-renowned for their large size, firm flesh and sweet flavour.

But 15 years ago, many locals didn’t even know they existed. Nearly 90 per cent of the commercial catch was sold overseas, primarily to Hong Kong and Tokyo. It was mostly the small dregs that were sold here. And they were typically used for chowder or stock, unless you were a sport fisherman and privy to the secret. (Sport fishermen are allowed to catch spot prawns year-round.)

In the early aughts, Rob Clark, then executive chef at C Restaurant, was desperately searching for a sustainable shrimp after boldly removing tiger prawns from his menu.

When Mr. Clark discovered spot prawns, he persuaded his fisherman friend, Steve Johansen of Organic Ocean Seafood, to get a licence and sell to the domestic market. Then he persuaded the Chef’s Table Society of British Columbia to hold a spot prawn festival on the False Creek Fishermen’s Wharf to generate local excitement.

That first festival, in 2006, nearly broke the dock with hundreds of people stampeding the wharf to buy live prawns from day boats, en masse, for the first time.

“The success of that festival has gone way [beyond] my wildest dreams,” says Mr. Clark, who was recently appointed to the Order of Canada for his trailblazing efforts around seafood sovereignty and now works as the chief culinary officer for Organic Ocean.

“Those dock sales only exist today because Steve Johansen took a leap of faith. If it weren’t for him, the fishermen would still be selling their prawns to processors for $12 a pound and British Columbians would still think that tiger prawns are a local product.”

The popularity of spot prawns has grown exponentially over the years. And so have the prices, which are determined by overseas buyers.

Exports, which in 2019 accounted for about 75 per cent to 80 per cent of B.C.’s market, ground to a halt last year. Most of Asia was still under lockdown, restaurants there were closed and suppliers had huge stockpiles of frozen prawns because of cancelled Lunar New Year events and the postponement of the Tokyo Olympics.

When the season opened in early June, a month later than usual because the industry needed to implement COVID-19 safety measures, fishermen were rightly worried whether it would even be worthwhile to go out in their boats.

But the domestic market rallied behind them and local sales “went through the roof,” says Mr. Johansen, one of several fishermen who successfully pivoted to online retail sales.

“People couldn’t get enough. Not just in spring, but all through winter. It was hard to find frozen spot prawns by Christmas.”

There were a number of factors that contributed to the frenzy, he explains. “A few days before the season started, restaurants reopened and the stay-at-home orders were lifted. We had all been caged up for three months. That was our first break for freedom. Everyone went out and started buying stuff, spending money like crazy.”

Because the season opening had been delayed, last year’s spot prawns were even bigger than normal.

And if anything, the pandemic really raised awareness about the importance of food-supply chains and everyone got serious about buying local.

This year, however, the state of the industry is on tenterhooks.

The B.C. Spot Prawn Festival has gone online and will celebrate its 15th anniversary virtually on May 29.

Though the industry pushed for another late-season opening, since indoor dining is still closed, the Department of Fisheries and Oceans went ahead with the May 14 opening. Fortunately, restaurant sales are brisk.

“Any restaurant that has a patio is still ordering their regular 10 pounds a day,” Mr. Johansen says.

Frozen spot prawns might not be available next year. The federal government recently announced an emergency review of the DFO’s abrupt decision (and flip-flop) in March to suspend the practice of tubbing frozen-at-sea spot prawns. There are concerns about illegal harvesting and undersized catches. But for this year, at least, frozen spot prawns should still be available at Christmas.

And the export market, although slowly rebounding, remains precarious.

“The inventories in China and Japan that were a problem last year have been whittled down,” says Christina Burridge, executive director of the BC Seafood Alliance.

“But the red tape for all countries exporting to China continues to make exporters nervous.” Japan is seeing a surge in COVID-19 cases and it’s not absolutely certain that the Olympics will go ahead. So the domestic market will be very important once again, but not almost the only market as it was last year.

So enjoy those spot prawns while you can. The domestic rush, although perhaps short-lived, is a dream come true for many.

Dock sales are fun! But if you don’t want to join the lineups (which often start forming early in the morning) or take any chances on missing out, several B.C. retailers have begun making it much easier to preorder online and some will even deliver to your door.

The small-business consortium of five fishing families offers presales and daily pick-ups at the Ladner and False Creek Vancouver wharves. They also deliver live spot prawns for a small fee (10-pound minimum) to homes in Richmond/Delta and across the Lower Mainland.

Based out of Quadra Island, the family-owned and operated company offers free delivery to locations across Vancouver Island (from Campbell River to Sooke) and the Lower Mainland with minimum purchase ($75 to $150).

This innovative boat-to-shop retailer and wholesaler offers live spot prawn preorders and pick-up from their South Burnaby and Kitsilano shops. Also new this week, Park N Prawn pop-ups at Uli’s Restaurant in White Rock or straight from the docks in Richmond.

The B.C. Spot Prawn Festival will celebrate its 15th anniversary in a pandemic-friendly format on May 29 at 7 p.m. Tickets for the virtual event cost $25 and are available on Eventbrite.

All proceeds will go toward the Chefs’ Table Society of British Columbia’s Culinary Library, a legacy project.

If you are not cooking your live spot prawns immediately (within three to six hours), their heads should be removed. When they die, an enzyme that turns them black, soft and mushy is released. Removing the heads helps prevent this. Save the heads for stock.

Do not place live spot prawns in fresh water. This will kill them. Be careful if storing live prawns on ice and make sure it drains well. Tap water, when melted, will also kill them. Use leak-proof ice packs instead.

Do not overcook. Whether poached, sautéed, steamed or grilled, spot prawns only need 30 to 45 seconds of heat. Seriously. Even one minute is generally too long. Watch the flesh. If it’s white, they’re cooked. Even if barely white, they will continue cooking from the residual heat.

If grilling live on the barbecue, be sure to put the lid down. They will jump. Place them on the grill dry (seasoning them with oil will only cause flare-ups). The heads need more time to cook than the tails. If you are planning to consume the heads, rip them off and throw them back on the grill for another minute.

(Angus An and Ken Nakano will both be sharing their tips for skewering and butterfly grilling in the virtual Spot Prawn Festival demo videos. For serious home cooks, these segments alone are worth the ticket.)

Don’t bother freezing raw spot prawns at home unless you have a vacuum pack or use a seawater brine. Tap water will affect the texture. Definitely don’t cook and freeze.

But if you really want to taste spot prawns at their height of lusciousness – “their absolute best, their peak enjoyment, the way spot prawns are meant to be tasted” – Mr. Clark recommends laying them out in a lasagna dish and sprinkling them with salt. Pour boiling water overtop, enough so they’re covered, strain 30 seconds later, then peel and eat.

When searching for spot-prawn wine pairings, Robert Stelmachuk, Vancouver Magazine’s sommelier of the year 2020, recommends whites or rosés with low intensity. “Look for medium to high acidity, no oak, a touch of sweetness and something that tastes like summer at the beach.”

These are his top three picks from the Okanagan Valley:

Lots of ruby grapefruit, peach, white flowers and tangerine. Vibrant and ultra-refreshing, with moderate acidity. The grace of an elephant on a tightrope. It just works.

This blend of aromatic white grapes should wear a ballerina tutu. Pear blossoms, lychee dust, honeyed minerals, lime zest and green apple. A wine that’s smarter than its brothers. Probably works as a janitor at M.I.T.

A sleek blend of gamay, pinot noir and pinot meunier. Dry and purposeful with juicy watermelon, morello cherry, confit of rhubarb and cassis wrapped in a luscious body with curves. Should come with a hot tub.

Ten things you need to know about British Columbia spot prawns
May 17, 2016 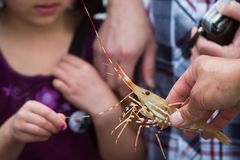 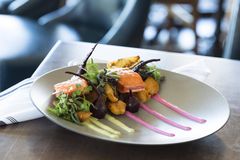