The old-school Hawaiian playlist with its cheerful ukuleles softly strumming in the background is the first clue that Stem Japanese Eatery is not like any other Japanese restaurant in the Vancouver region.

This newish Burnaby restaurant, which opened last December, is definitely not a hushed temple to kaiseki, the epitome of traditional Japanese haute cuisine served in a progression of intricately plated small dishes. It’s much more casual and difficult to define with its multiple menus (summer, regular, omakase) and various seating areas, which includes a kappo-style kitchen bar alongside rustic wooden benches.

And yet, what really sets this ambitious outpost apart and makes it special, is an obsessive – perhaps singular – enthusiasm for one of kaiseki’ central tenets: ultraseasonality rooted in local terroir.

Beyond B.C. seafood, which is featured in abundance alongside peak-of-season species from Japan, the extensive summer menu digs deep into the bounty of local farms. There are sweet apricots tossed with fresh yuba (bean-curd skins) in a creamy tofu-sesame paste; local arugula and heirloom tomatoes pressed into a refreshingly cool, deeply umami dashi broth; and squirting-hot Chilliwack corn on the cob fried in a golden web of lacy tempura batter.

The three-page fresh list goes on and on. To pair, there is plenty of sake, but also flights of B.C. wines (white, red or mixed) culled from an all-star B.C. wine list that is at least 10 pages thick. On Wine Wednesdays, all bottles are half-price.

Stem is one of only two local Japanese restaurants that celebrate a true farm-to-table ethos. The other, to a lesser extent, is Yuwa Japanese Cuisine in Kitsilano, formerly known as Zest, from which, not surprisingly, Stem’s two co-owners were transplanted.

At Zest, Tatsuya Katagiri was the executive chef and wine director for nearly nine years. Yoshiaki Maniwa was the sushi chef and a co-owner.

Mr. Katagiri’s seasonal menus are explosions of the local ingredients he merely dabbled with previously. “A lot of people have complained that my menu is too big,” he says by phone. “But I don���t mind. Especially in the summer season, I go to the farmers market and think, ‘Oh, I want to cook with this or that.’ I really want to enjoy it all.”

Although transformative, the innovative kitchen dishes are anchored in serious technique. Chilliwack corn purée, for instance, is mixed with sesame paste and arrowroot powder then lightly deep-fried to a wobbly texture that looks like agedashi tofu, but has sweetness, custardy heft and a dark-yellow cornbread hue.

Dashi omelette, made to order with local free-range eggs, is folded like an envelope over thin layers of snow crab and local cilantro or watercress. While it doesn’t have the creamy melt of classic tamago, it has exquisite flavour lifted by ocean brine and bright greens.

Chilliwack pork jowl is cured in a house-blended miso for 48 hours so the fibrous muscles tenderize to expose silky fat underneath. A quick char on the grill gives the meat snap and structure. Granny Smith salad and rhubarb purée balance the richness with fresh acidity and tang.

Mr. Maniwa’s sushi is less experimental. There are some embellishments: sawagani (tiny freshwater crabs) are brined in soy to soften the shell and temper the tomalley; local chum ikura is house-cured in soy, but not salted, for a softer pop; mackerel is lightly treated with vinegar (rather than the typical smoke) to balance the oiliness and brighten the minerality.

But for the most part, his style is simple and unadorned without much scoring, flashy knife work, elaborate garnishes or strong seasoning in the rice. While not superlative, it’s respectful.

The omakase (chef’s choice) menu is a nine-course selection of sushi and seasonal dishes, often mixed and matched in smaller portions or amalgamated in novel ways. The corn agedashi, for instance, is paired with fried halibut cheeks, heirloom tomatoes, snow crab and sea asparagus in a sticky dashi broth sweetened with mirin and thickened with potato starch. Combined, the sum is even greater than its many splendid parts.

My only major quibble is Mr. Katagiri’s heavy-handed use of truffle oil on the omakase menu. His affection for the noxious garnish is an honest one, acquired while working many moons ago at Mercato, an Italian restaurant in Calgary. But it shows up quite frequently in the most unexpected places – pickled radishes!

There is also the question of size. The food selection is so massive, I didn’t even put a dent in the regular menu, other than to try the staub gohan, a rice dish cooked to order in a ceramic Dutch oven with seasonal toppings.

Mr. Katagiri says he can’t help himself. He wants to offer something for everyone. He says he sees the restaurant as a veritable stem, holding up his customers – “the flowers.”

But sometimes a lack of menu editing isn’t necessarily helpful; it only makes it harder for customers to choose what to eat. And if that stem were to break under the weight of excessive food costs and waste, all those blossoms would wither. A critic shouldn’t really worry about a restaurant’s business model, but in this case, I do. Stem Japanese Eatery is one of a kind. I would like to see it flourish. 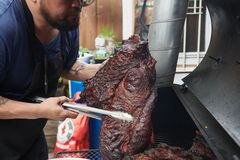 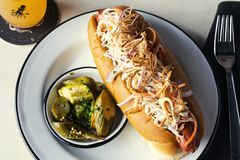 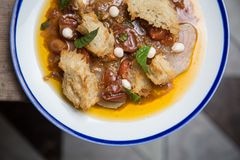