The Richmond Night Market, now in its 19th year, is bigger than ever. With 113 food stalls and an average of 10,000 visitors a night, organizers claim it is the biggest night market in North America.

The food court isn’t the only draw. There is live entertainment, a games midway and plenty of polyester socks for sale. So many socks! I don’t really understand that.

But after jostling through the crowds and choosing my plates carefully, I was pleasantly surprised to discover quite a few serious chefs moonlighting as vendors, enterprising food producers who were using the food court as an incubator and a couple of hidden gems hawking delicacies that aren’t easily found elsewhere. Here are my picks.

Korean fried chicken began trending in Metro Vancouver about 10 years, but its braised cousin never really crossed over into the mainstream. Aaron Lee, the sous chef at West Restaurant (chef de partie at Boulevard before that), is on a mission to give this healthier home-style dish the respect it deserves. His large drumsticks are soft, silky and nearly falling off the bone after simmering for 12 hours in a sweetly aromatic, soy-based bath. Scooped from warm chafing dishes, they are coated to order in a choice of two gloopy sauces – honey-soy garlic nicely balanced with black pepper or spicy gochujang made with softly buzzing powder rather than the more typical sharply burning paste. Served with rice cakes and sprinkled with scallions in a deep bowl, this chicken is finger-licking good – but so tender you might need to eat it with a spoon.

The best burger in Vancouver, Beyond Meat edition

Rugged side of B.C.'s Sunshine Coast is lined with tantalizing seafood

Mitten crab, also known as hairy crab, is a prized delicacy in China. The freshwater crustaceans don’t contain a lot of meat, but they are plump with rich, buttery, golden-orange roe. The importation of live hairy crab, an invasive species, is illegal in Canada. I have never seen it here and have only tasted it once in Hong Kong, where the season, which runs from October to December, is celebrated as a festival. So to find hairy crab roe at the Richmond Night Market is somewhat akin to stumbling across a Périgord truffle in Stanley Park. The two young vendors have recently begun importing a new frozen product from Shanghai. The roe comes individually packaged in a light ginger-wine sauce with small clumps of meat. They just snip it open, heat it up and pour the fatty goodness over noodles or rice. It’s divine.

These Royal Thai flower cookies are so delicate and pretty it almost seems a shame to eat them. Almost. They bloom like origami, crunch like sweet wontons, are dusted with edible gold leaf and are served over creamy panna cotta (Thai tea, green tea or coconut) that has great depth of flavour. The vendors, three cooks from Maenam (Vancouver’s best Thai restaurant) fry the cookies on-site using intricate brass moulds that look like hot-wax stamps. They are flat discs when pulled out of the oil and then stretched around plastic funnels so the layers unravel to form a round lotus blossom.

Light, airy, tall and as jiggly as jello with a creamy custard centre, this Instagram sensation from Japan tastes even better than it looks. Or at least this version does. The pancakes are made with a stiff-peaked meringue that is folded into regular batter to attain their towering height. But while some recipes call for a pastry ring, these are griddled freestyle and shaped with spatulas, so they’re a little wonky around the edges – but still impressive to behold, especially after being draped in creamy toppings that include zesty grapefruit and bitter matcha.

James Wong has been operating his stall for six years, which means he was on the culinary cutting edge when these Chinese crêpe sandwiches exploded in North America. His Taiwanese version, folded with multiple thin layers, is fluffier than most and almost like roti. He experiments with several unconventional flavours. For the beef kimchee wrap, he doesn’t fry a whole egg into the mung-bean batter. But it looks as though he uses an egg-white wash to give the exterior a nice golden crackle. Drizzled with hoisin and hot sauce then stuffed with a soft, spongy doughnut, it was one of the most satisfying bites I ate all night.

James Chen, second cook at the Fairmont Waterfront Hotel, has been operating his Night Market stall for 12 years. His fatty lamb skewers, sizzled over charcoal and rubbed with high-quality cumin, are pretty good, but he remains the star of the food court because he’s such a great performer. Toiling over the grill in a tall toque and starched chef whites, he peers up through the smoke every so often. And with the singsong cadence of a seasoned carnival barker he booms out to the crowd: “Did you know I served breakfast to the Queen?”

You don’t have to go the Night Market to find these mochi-dipped strawberries with a layer of red-bean paste in between. After last year’s smashing debut, the sweet treats were picked up by Meinhardt Fine Foods and several other retailers. It’s a heart-warming story for new food-product purveyors. Dion Kangae-Tse, an electrician by day, used his grandmother’s recipe for the original flavours. This year’s twist replaces the red bean with a New York-style cheesecake courtesy of his dad.

JUST FOR THE FUN OF IT

You can’t go to the Night Market without trying at least one crazy novelty dish. This year’s breakout hit is a rainbow-striped grilled cheese sandwich that reminds me of those old television commercials for Bounty Paper Towels – the “quicker picker upper.” Remember how Rosie the Waitress used to balance coffee cups on wet sheets to demonstrate their strength? This wacky sandwich is similar. You’re supposed to stretch the toasted milk bread apart until the Crayola-coloured cheese pops a hole. That doesn’t come easy, which is troubling if you care about your colon health. The cheese isn’t awful. It’s actually quite sweet. But there has to more in the mix than just mozzarella, condensed milk and food colouring. I only really started worrying when I went back to see how it was made. That cheese is rock solid. It only softened up after it was nuked in the microwave, fried directly on the flattop and smashed between the bread. In retrospect, it might actually be easier on the digestive system to eat a thick wad of absorbent paper towels. 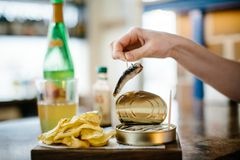 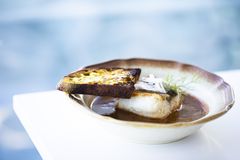