Oca Pastificio is one of the best new restaurants in Vancouver, thanks to its heavenly handcrafted pasta available in five-course tasting menus.

It’s also the most frustrating dining experience I’ve encountered since the start of the pandemic, owing to its maddening reservation policies.

Let’s start with the good stuff: the silky squash rotolo curled into crimped pompon florets draped with sage butter; the tender tooth bite of eggy tagliatelle kissed by bright, fruity sungold tomatoes puréed at peak ripeness; the thumb-dimpled gnocchi “so light and fluffy you have to close your mouth before it flies away.”

The latter was an apt observation from my new friend Penny Thompson. And the story of how I ended up sharing a table with her and legendary singer-songwriter Ann Mortifee involves a lovely twist of fate that soothed my nerves and gave this column a happier ending.

Instead of banging my fists and railing against the tyranny of walk-in-only seating, I am now merely shaking my head and wondering what can be done to make Oca Pastificio less a victim of its own success.

Chef and co-owner Greg Dilabio is a pasta artisan. For nine years, he worked alongside Adam Pegg, the first Canadian Master of Italian Gastronomy (and Oca Pastificio co-owner), at the renowned La Quercia and L’Ufficio restaurants on Vancouver’s West Side.

Mr. Dilabio understands the nuances that are capable of transforming a starchy staple into the main event. He knows that certain shapes provide different textures that are better suited to particular sauces.

He devoutly follows the seasons, uses farm-fresh ingredients from local purveyors who are as passionate as him. And after full days of prepping fresh dough, he spends the entire dinner shift at a ringside station beside the bar, meditatively rolling, cutting, pinching and twisting the chalkboard specials to order (some are extruded earlier) with a twinkle in his eyes and a beaming smile under the mask.

In Mr. Dilabio’s skilled hands, three or four courses of back-to-back pasta taste more like a delicate study in contrasts than a gut-busting carbohydrate overload.

The daily tasting menu, which starts at five courses, but often adds up to six or seven, is an excellent deal at $60 a person.

The menu always begins with antipasti (all DOP meats from Italy) and includes an inventive salad such as olive-oil-poached rabbit with crunchy frisée from Hannah Brook Farm or ambrosial heirloom tomatoes from cult favourite Stoney Paradise.

For dessert, I’ve only had the pleasure of a creamy-crackly hazelnut semifreddo, but the restaurant apparently also does an outstanding panna cotta.

The 22-seat room is small, but sweet with dark wood benches, black-and-white tiled floors and exposed piping on the ceiling.

The drink list is casual and strictly Italian – beer, classic aperitifs, grappa, several amaros – and the wines are unpublished. Just tell the server what you’re in the mood for and he’ll bring a few bottles to the table.

It’s a lovely little neighbourhood restaurant run by a small crew of five who obviously pour their entire souls into each shift.

But good luck getting in.

After opening in late 2019, the restaurant was knocked off its feet from the get-go and barely had time to catch a breath before the provincewide closings in March of 2020.

When restaurants were allowed to reopen, Oca Pastificio experimented with reservations. But you had to make them by phone. There were only two seatings – 5 p.m. and 8 p.m.

After the second indoor-dining shutdown, Oca reopened with a no-reservations policy and there were lineups every night.

I finally caved for a special occasion. It was a Sunday night. General manager Antoine Dumont (who didn’t recognize my name) made an exception when I appealed by e-mail and saved me an early table.

But we couldn’t make it for 5 p.m., when the restaurant opens. The guests who were joining us had to wait for their babysitter. So we ended up having to rush through dinner in order to be out by 8 p.m. and actually had to beg for a second bottle of wine even though we still had two pasta courses to eat.

The pasta was divine, but we left with a bad taste in our mouths.

The next time I went, I arrived at 4:45 p.m. The lineup was already snaking down the sidewalk. When the doors opened, we (a party of two) snagged the very last table (set for four).

The six people behind us were out of luck and would have to kill a couple of hours if they wanted to be placed on the wait list or else find somewhere else to eat.

I felt horrible about hogging the empty seats and invited two women who were behind us to join our table. As it turns out, one was the goddess Ms. Mortifee. We ended up having the most wonderful conversation and a dinner that I will remember forever.

But that was just pure serendipity. Dinner should never have to be this fraught.

No-reservation policies – which are becoming much more common across Vancouver as insurance against no-shows – are inhospitable.

How are diners supposed to make plans? A five-course pasta tasting menu is not something you just drop in for on a whim.

It’s also bad business. If Ms. Mortifee and Ms. Thompson hadn’t agreed to join us, the restaurant would have been out about $300. 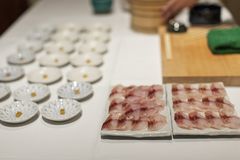 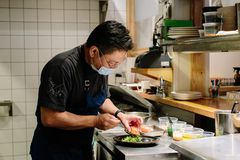