Let’s start on a positive note. The service at Tacofino Ocho is stellar. From host to manager, everyone is friendly, attentive and responsive. Whenever we voice a disappointment – from a long list that begins with a pounding assault of torturous acoustics and crumbles into a burnt cookie – they address it with genuine concern, grace and efficiency.

Case in point: a flat margarita.

The jalapeno-infused margarita is tart, lively, fresh. But the classic version? Even if you overlook the cheap (small-cubed, thin-edged, quickly melting) ice and a salt rim so ridiculously thick it grazes the chin, there is something missing.

The server apologizes. She doesn’t question my palate. She offers a reasonable explanation – perhaps it is not to my liking because the classics are prebatched and poured from a tap. She whisks the offending cocktail away and brings me a new one, shaken to order.

The second margarita is too sweet. And I still can’t taste the tequila. Could she maybe just bring me a shot of the jalapeno-infused Cazadores Blanco to spike it?

No, she’s not allowed to do that. Quality control? Whatever the reason, she takes the second drink away, deletes both from the bill and brings me a third – spicy and perfectly balanced – jalapeno margarita.

Everyone is happy. No feelings are hurt. Now if only we could do something about the insipid salsas, doughy tortillas and bitter taste of built-up grill char skidding across almost every plate.

I guess I could say something. I’m sure they would try to fix things. But then we would be here all night and I would almost certainly be partially deaf in the morning.

Tacofino has everything going for it: a great origin story about the little truck serving Baja-style fish tacos from a surf-shop parking lot that earned national acclaim (including an EnRoute Magazine best-new-restaurant award); truly talented chefs (the former Michelin-starred Stefan Hartmann now works in tandem with co-founder Jason Sussman); deep-pocketed ownership (Ryan Spong, a former investment banker, has expanded the company to a dozen unique venues); and an excellent brand-name reputation.

But if this latest location is any indication, Tacofino’s cult-like following is no longer deserved.

And it’s just such a shame. There are so many fantastic taco joints in Vancouver – The Mexican, Sal y Limon, Chancho, Los Cuervos, La Taqueria (which has also grown, without sacrificing quality) and more. Yet Tacofino continues to suck all the air out of the room.

You can’t hear the HVAC system at Tacofino Ocho. It’s too loud in here with the rumble of 100 diners clanging off cinder-block walls and bouncing back from wire cages hung from industrial ceilings. Accented in tall greenery and soft pastels, the tropical prison-chic design reminds me of the luau-themed Bachmanity Insanity party at Alcatraz on HBO’s Silicon Valley, Season 3.

But you can certainly feel the crazy-cool chill of air conditioning. Hands down, this is the most uncomfortable Vancouver dining room built in recent memory.

The hard-working exhaust system is, however, necessary for the showpiece Wood Stone charcoal grill. Each Tacofino location has its own menu. This one is lit, for better and for worse, by fire and smoke.

Whole mackerel is a bold choice in a city that seems almost pathologically afraid of eyeballs and scales. It’s a strong-flavoured, oily fish that remains succulent in its crisped, lightly seasoned skin. But the kitchen is shooting itself in the foot by serving one of its signature dishes on such a small platter, making it extremely difficult to open and debone.

Watery tomatillo salsa doesn’t add anything. It has no body, no tension between salt and acidity, no flavour at all – except for a few bitterly charred bits of pulpy vegetable. If I were to give this salsa the benefit of the doubt, I’d wager it was blitzed a few hours before service and not given enough time to rest and come together. Mind you, none of the other salsas tasted much better and the leftovers didn’t improve the next day

A long slab of pork belly, slathered in a thick and vinegary salsa negra, seems to have missed the grill altogether. It has no char or crisp. The meat is dried out and fibrous and the fat rubbery, indicating that it was probably cooked too quickly.

Finally, a grilled skirt steak that is rare, red and juicy, nicely sliced against the grain, lightly seared and very heavily salted (but let’s not get too picky). But it comes with a darker, creamier, still soulless version of the green salsa and flour tortillas so dense and chewy (every time, on every dish) they camouflage the meat. And blackened green onions so harshly acrid I want to spit them out.

This bitter-burnt flavour keeps cropping up – in an unblanched-rapini taco, in dry chicken thigh, in the salsas, in the cactus on a clumpy, curdled mess of sticky queso fundido. It’s not just a smoky, campfire-like toastiness. It has a distinct note of laziness from caked-up char on a grill that isn’t being cleaned.

It’s not all horrible. Creamy potato croquettes are nestled in a messy bed of herbed corn, chipotle mayo and fresh cheese; crispy cod tacos come with a brightly spiced avocado crema; grilled squid gets an intriguing sweet twist from crispy coconut. These are the richly satisfying, brazenly unorthodox flavour profiles on which Tacofino built its reputation.

But even the famous Diablo cookie – dark chocolate pulsing with hot cayenne and zesty ginger – has a scorched underside and bitter finish. 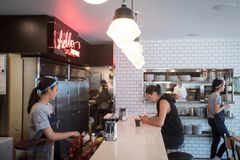 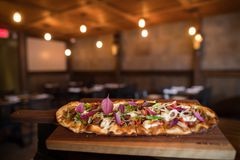 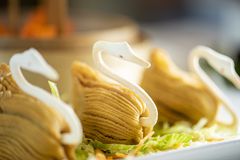