We just celebrated the second annual National Takeout Day. And even though I’m a lot less worried about piling into restaurants en masse than I was this time last year, I still think the love should be spread out more evenly and consistently.

Since indoor dining was halted in B.C., I haven’t cooked at home once. It’s been nothing but takeout (and takeout leftovers) all day, every day.

Many others must be doing the same because I’ve received a boatload of passionate appeals from readers about their favourite neighbourhood holes-in-the-wall that don’t have publicists, have never been written about and deserve attention.

So that’s what I did this week. I took your suggestions and checked out three under-the-radar gems (all of which opened during the pandemic) that I likely never would have heard about otherwise.

Thank you for the recommendations. It made my life a whole lot easier because who do you support when all restaurants need it?

I fib, slightly. This Yemeni restaurant has actually been on my radar since the former pop-up opened its new Chinatown location in February because a friend, urban planner Andy Yan, keeps urging me to go.

So what is Yemeni food? At Saba Foods, which specializes in slow-roasted lamb and chicken, it has a lot in common with Turkish cuisine. There are two types of each protein: mandi (rubbed with a mild blend of six secret spices, predominantly turmeric) and haneeth (slightly spicier and heavy on the paprika).

They are all fall-off-the-bone tender, generously dusted with toasted almonds and served over fluffy basmati rice that soaks up the abundant juices. You can order them in various-sized platters that come with a basic green salad dressed in sumac and a loose-tomato hot sauce.

This is very good, homestyle cooking that seems to travel well. The meat certainly didn’t appear to lose any of its succulence. But owner Alwaleed Ogbah says it’s not quite the same as fresh out of the oven. And he has, commendably, taken a few items off the menu (including kebabs) that are not suited for takeout.

The restaurant’s secret weapon is its Syrian pastry chef, who makes incredible variety packs of baklava scented with rosewater, stuffed with honeyed pistachios and layered with crumbled walnuts between whisper-thin wafers of phyllo pastry.

Wolfgang Schmelcher has worked in Michelin-starred restaurants in his native Germany and top hotels all over the world. He’s been inducted into the Chaîne des Rôtisseurs and received the Five-Star Diamond Award by the American Academy of Hospitality Sciences.

But after spending the past 10 years as the national executive chef for a large retirement housing company, he said, “That’s it, I’ve enough of corporate life.”

He opened a small Kitsilano café in that specialized in grab-and-go homestyle meals. Unfortunately for him, the café opened two weeks before the industry-wide closures last March.

But to the very good fortune of his customers, many of whom are elderly, he quickly added frozen entrées to his repertoire. And now he’s doing a brisk business in take-and-bake beef bourguignon, coq au vin, butter chicken and other made-from-scratch comfort foods that don’t cost an arm and a leg.

The regular grab-and-go menu features a fabulous chicken schnitzel sandwich gussied up with pickled shallots and hummus, a daily changing special (this week’s chicken scallopini in creamy mushroom sauce with blistered capers and spaghettini was spot-on) and excellent croissants from a local French baker.

Mr. Schmelcher’s loyal fans – which include several ardent letter writers – swear by his creamy hot chocolate made with grated flakes to order.

I ordered from this family owned Chilean-Mexican restaurant for the best-selling (overhyped) birria tacos, discovered a whole new world of street food and began swooning the moment I stepped across the threshold. The scents of slowly simmering beef barbacoa and caramelizing dulce de leche were so good I squealed out loud.

Birria tacos, for the uninitiated, are pan-fried corn tortillas stuffed with braised meats and cheese, served with side bowl of consommé for dipping. They’re the biggest food-porn trend on Instagram these days. And Don Oso’s makes an amazing, deeply spiced broth sweetened with onions that’s so thick it’s almost gelatinous.

But the pan-fried tortillas? I went straight to Confederation Park right around the corner and gobbled them down right away, yet they still tasted tough and chewy. I’ll have to do more research. (Top Rope Birria food truck apparently does a great version.)

I was intrigued by the completo hot dog topped with sauerkraut, palta (guacamole), onions, mayonnaise and jalapeno. This is apparently the most popular street food in Chile. But it was really just a plain pork wiener with different fixings.

More interesting was the chacarero sandwich with thinly sliced steak on a hoagie bun, similar to a Philly cheesesteak but with slivered green beans. The newly opened Sebastian & Co. butcher shop on Howe Street downtown is making a premium, charcoal-rubbed roast beef rendition, which I am now dying to try.

But the best surprise at Don Oso’s was the choriqueso, which is similar to a queso fundido, but in this case, the spicy chorizo is the dominant ingredient – crumbled in a big heap on the bottom, topped with melted cheese and finished with a scoop of divinely chunky palta bright with lime.

I have full intentions of going back for the thousand-layer torta mil hojas cakes (which is what the ambrosial dulce de leche was being prepped for), but I’m almost glad it wasn’t available. If it had been, I probably wouldn’t have ordered the baked caramel flan, which was creamy beyond measure. 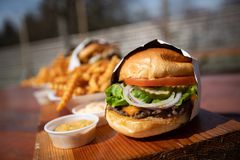 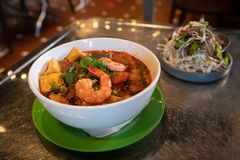 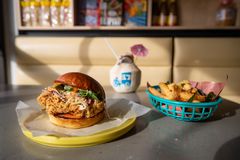