Isn’t it fun to discover a charming boîte that hardly anyone knows about? Secret foodie finds are rare in these days of supersaturated social media. They’re almost as thrilling as drinking wine during a weekday lunch, a naughty indulgence no one partakes of anymore.

That’s exactly what I was doing in early December – happily swirling a glass of fleshy white Burgundy just before noon − when a friend introduced me to Holts Café. How had I not heard about this elegant hideaway, which had been open for more than a year?

Tucked behind Louis Vuitton on the second floor of Holt Renfrew, with no street access or signage, the serene corner space was awash in natural light and speckled in soft shades of pearl grey, sand and ocean blue. The nautically themed restaurant with its subtle sailor-rope detailing, sculpted driftwood and glass fishing-net floats was the work, as I later found out, of the esteemed Canadian design firm Yabu Pushelberg.

The menu was simple and classic. We supped on a sharply dressed niçoise salad, composed of plump slices of barely seared albacore tuna, and a rich heap of creamy mushrooms topped with a runny poached egg on toast.

The wine card was short and sweet, with British Columbia well represented among a handful of respected French labels and not a single dud in the mix. The service was polished. The acoustics were comfortably swaddled. The mood was genteel.

Here’s one to recommend, I thought to myself, for ladies who lunch, business meetings, serious interviews and romantic tête-à-têtes.

Whoops, maybe not. About a week later, it was announced that Holts Café was closing. (Isn’t that always the way?) On the upside, it was being replaced with a petite version of Colette Grand Café, the fancy schmancy French spot in Toronto’s Thompson Hotel, which had attracted tout high society – until it quietly segued into a private event space.

The Vancouver launch was part of a new partnership between Holt Renfrew and Toronto’s Chase Hospitality Group (best known for its pricey stockbroker hangouts The Chase and The Chase Fish and Oyster, but also making a name with a rapidly growing vegetarian chain called Planta). The deal will eventually bring five Colette Grand Cafés to department stores across Canada.

The Vancouver “grand” opening in March was breathlessly heralded by local bloggers who praised the “chic décor” in this “cozy oasis of calm” and the “impressive” French-style dishes that were sure to make the new restaurant “the next destination on your foodie bucket-list.”

Widely distributed photos of the original restaurant − all bushy bouquets of sunflowers, sumptuous drapery and oval-backed Louis chairs − were indeed grand. So I looked forward to seeing the renovations.

It was a lot harder to find without the guide. (The new operators might want to invest in decipherable signage on the in-store maps.) After finally being steered in the right direction, we found the new Colette Grand Café behind a jumble of construction. And guess what? Nothing had changed. Seriously, the restaurant looks exactly the same.

It wasn’t just the décor. The wine list and the staff and some menu items seemed eerily familiar. Had there been any changes at all? Were the bloggers duped?

“The new plates just came in,” general manager Andy Wong said as he leaned in to serve the same old creamy mushrooms on toast (now elevated on fluffy, cake-like focaccia) and niçoise salad (subtly improved with wedges of romaine swirled around the dish in an artful half-moon crescent).

“We’re also getting new flatware and glassware, and we’re going to repaint in the coming months.”

So it was much ado about little. I suppose it’s easy to hype the relaunch of a room that’s been operating under the radar. And it wouldn’t make much sense to fix things that aren’t broken.

The Chase Hospitality Group was wise to keep Mr. Wong on as general manager. Sharply attentive, but not obsequious in the least, he had us from the first generous pour of La Stella Vivace. We were also impressed with the way a young server (utterly charming, but obviously very green) deferred to him when unable to answer our questions. She wasn’t afraid to go to him, which isn’t often the case.

Executive chef Jason Harris has also been kept on from the old Holts Café. He seems to be having a harder time adjusting to the new menu, which actually has been substantially changed, although it still keeps to the previous style. (Oddly, only the slightly tweaked niçoise salad and mushrooms on toast were carried over.)

The kitchen does a few French bistro classics very well. A spotless yellow omelette neatly folded over a custard-soft inner layer and plumply stuffed with creamy crab and whole shrimp is a slow-cooked marvel of precise technique. Freshly chopped beef tartare adorned with glistening egg yolk, blistered capers and waffle-cut gaufrette potatoes is one of the best renditions in the city.

If you go for weekend brunch, do order the house-smoked bacon, which is deceptively pale for such monstrously meaty flavour, glazed in maple syrup and cut as thick as peameal.

But a lot of the dishes – raw, doughy, gluten-free flatbread, insipid (and overcooked) seafood linguine, floppy perogies smothered in a soupy sea of sweetly truffled brie and sour crème fraiche – are utterly forgettable.

The Pacific cod with its slippery skin (golden-crisped yet at the same time mushy) was so off-putting we sent it back. I don’t think it is meant to be a stew.

Diners who come here looking for the well-reviewed soufflés and frog legs from the original Colette in Toronto will be sorely disappointed. This is a much more simplified menu. The starkest difference is in the desserts. I was hoping for crackling light profiteroles draped in bitter dark chocolate. I was given a caramel fondant that looked like a homemade cupcake and tasted like boxed devil’s food.

If you order well, Colette Grand Café does make for a decent downtown lunch spot. It’s less expensive than most hotel restaurants and far more refined than the chains. But I can no longer recommend it for quiet meetings or a secret rendezvous. The restaurant is busier than ever. The hype obviously worked.

Review
Vancouver’s Coquille sails into uncharted territory with its creative menu, but hits choppy waters along the way
May 24, 2018 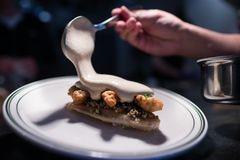 Review
Vancouver’s Kulinarya Filipino Eatery offers a delicious way to get your hands dirty
May 16, 2018 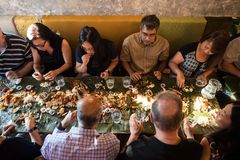 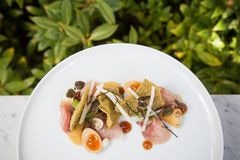