I love the mark of passionate restaurateurs, especially when they own multiple concepts. As saturated as most cities’ food scenes are, it’s not as common as you may think, which makes the mark stand out even more.

Sitting at L’abattoir or Coquille in Vancouver, you feel chef Lee Cooper’s impact, the same way one does in Calgary at Model Milk and Pigeonhole à la Justin Leboe. In Saskatoon, The Hollows and Primal offer the distinct stamp of chef/owners Kyle Michael and Christie Peters.

This sort of individuality is what sets certain concepts apart from the rest of the pack in their respective cities. Winnipeg’s Scott Bagshaw is arguably the city’s most individualistic restaurateur. If you’ve eaten at any of his restaurants, past or present, you can see the similarities. Not necessarily (though occasionally) with menu items, but with vibe, style and creative approach.

Mr Bagshaw’s latest Italian-focused restaurant, Passero, is housed inside Winnipeg’s largest tourist draw: The Forks. The riverside market, comprising two main heritage buildings, is filled with all sorts of artisans and food vendors. In recent years, its food hall, The Common at The Forks, underwent a multimillion-dollar renovation to become the first, slick-looking food hall of its kind in Canada where patrons could order beer or wine, sip, stroll and eat food from a variety of food stalls.

Passero is located in The Common and though just adjacent to the main seating area, which can be noisy and hectic at the best of times, it boasts a calm and sophisticated atmosphere away from the craziness.

As with his other eateries, Enoteca and Máquè, the chef/owner has quite the knack for creating spaces with minimal but effective design details. With the help of Number Ten Architectural Group, Passero boasts an impactful accent wall of angled wooden slats and a ceiling that graces the same wooden fixtures above a handful of tables, banquettes, open kitchen and a small bar. It’s a space that would fit in easily in any major city – San Francisco, Toronto, New York or otherwise. Design is an important element of any restaurant that wants to stand out, and Mr. Bagshaw knows that.

During the day, the restaurant operates as its lunch alter-ego Corto (“short” in Italian) where it decides to do away with table service and offers only counter ordering. There is something fairly odd about having to walk up to the bar of a nice-looking restaurant to receive a buzzer for your order followed by receiving your food on cafeteria trays, but c’est la vie.

Mr, Bagshaw’s clever sandwich creations – such as the mortadella with a pungent mustard, goat cheese and smoked mozzarella, with an addictive Parmesan aioli to dunk into – are pressed to near-perfection and help make up for the peculiar ordering system. Likewise, the side dishes that can come along with a sandwich and a glass of wine for only $19 (I do love a boozy lunch special), are just as impressive.

The roasted beets dressed with fresh basil, blood orange, pistachios, smoked blue cheese and a bright Italian salsa verde are a delicious home run, especially for a root vegetable that is exhaustively utilized in salads year-round these days. The fried potatoes, doused in an umami-ridden black garlic aioli with thin wisps of basil, are equally as palatable and memorable.

Dinner is when the big guns come to the menu and Mr. Bagshaw’s creativity comes to full effect, for the most part. Skip over the adequate offerings such as ricotta (not made in-house, our server informed us) with aged balsamic, parsley and thick chunks of bread, or the caesar topped with chives, cured egg yolk and a crumbling of prosciutto, and look to the dishes that sound more clever. Because they are.

A seemingly simple beef tartare is elevated nicely by a rich Parmesan cream, a prosciutto relish and thin potato chips. It’s easily one of the best preparations of tartare that I’ve had this calendar year.

The gnocchetti arrives with teeny cubes of toothsome butternut squash in a brown butter and cheddar sauce studded with pine nuts. It’s akin to a grown-up version of mac ‘n’ cheese and no one at my table is complaining about it.

A fried “risotto”, using faro, squid ink and romesco is by far the most unique dish of our meal. With tender octopus resting on top of the crispy, al dente grain mixture and a cool cream underneath, it hits all points and is an exemplar of how a chef can layer textures.

A plate of tender slices of pork follow, topped with rich jus, oddly out-of-season green peas and other accruement – asparagus graced the menu, which also seemed bizarre and wasn’t ordered – as well as some interesting fried Brussels sprouts with apple mustard, hemp hearts and walnuts.

Passero boasts a concise, but creative wine list. Because The Forks boasts the best wine shop in the city, interesting wine is but a hundred feet away for Mr. Bagshaw’s front-of-house team.

Usually, I encourage people to steer clear of dining in tourist-dense areas, but Passero bucks the trend and, much like the owner himself, proves that you can march to the beat of your own drum in a place where it’s encouraged to feed the masses. 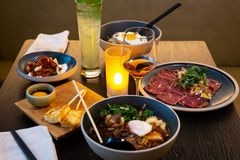 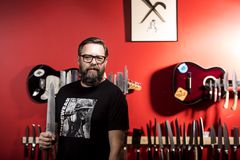 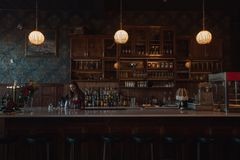