I was in a carnivorous mood when I visited L'Abattoir. That this new Gastown restaurant would be all about hearty meats seemed a reasonable expectation given the name.

As it turns out, the name pays homage to its location, between historic Gaoler's Mews and Blood Alley (where the Irish Heather once rallied) and the area's colourful past as the city's main butchery and meat packing district.

There were a few tantalizing meat dishes on the menu - roast flank steak with sweetbreads and leg of lamb cooked with Indian spices. And as I later discovered, the kitchen puts pork to a multitude of creative uses.

But I was surprised to discover so much fish, seafood, seasonal produce and fresh flavours from this remarkably innovative kitchen that specializes in market-driven West Coast fare with French influences and molecular flair.

What does that mean? Imagine a crispy-skinned fillet of ling cod ($23) cooked perfectly moist and flaky, served with Stoney Paradise heirloom tomatoes (the best in British Columbia) that are slowly roasted and slightly shrivelled, yet still bright red and vibrantly sweet. Add a shot of smoothly emulsified, garden-fresh salsa verde and several curiously flat kale leaves that have been dehydrated into shatteringly thin, fulsome-flavoured sheets. Every element on the plate, save for a spongy (overcooked) white-polenta pancake, hit the mark.

I suggest you imagine this dish because it's no longer on the menu, which changes weekly according to what's fresh and in season.

There was plenty more to savour, including cocktails from mixologist extraordinaire Shaun Layton. We sipped a boozy banana daiquiri ($10) made with Ardbeg 10-year-old single malt scotch, and quaffed the refreshingly delicious Clover Club Refashioned, in which fresh mint and muddled raspberries dance quite saucily with gin and sweet vermouth.

The overall restaurant design, spearheaded by Situ's David Hepworth, is warm and elegant, funky yet semi-formal. The space is divided into three rooms - a sunken front bar (where you can marvel over Mr. Layton's mason-jarred apothecary), the second floor (which has been opened up into one large, dark and dimly lit space) and the thoroughly gorgeous glass atrium out back with its classic French tiled floor, pillars of dripping candles and a showpiece chandelier sculpted from driftwood.

It's not often that a new restaurant captures all these various elements with equal measures of intrigue and sophistication. But it all makes sense when you realize that general manager Paul Grunberg is one of the owners, along with Nin Rai of Truffles Fine Foods catering and executive chef Lee Cooper.

Mr. Grunberg is one of the best front-of-the-house captains in Vancouver today, having proved his mettle at Lumière, Chambar, Market and Bao Bei. He's obviously pouring a passionate mix of blood, sweat and tears into his first restaurant.

Mr. Cooper is a lesser-known entity. I wasn't the only food writer in Vancouver who said "Lee who?" The chef has a good pedigree (he's the nephew of Okanagan chef Bernard Casavant) and an impressive résumé (Terrace at Mission Hill Family Estate, the Pear Tree in Burnaby and stages at Britain's the Fat Duck and Tom Aikens).

But honestly, he had me at my first bite from the breadbasket. It was filled with gently puffed anchovy twists, spicy flatbread and buttery, bacon-rolled brioche. It was free, replenished without asking and - no exaggeration - the most interesting to be found in Vancouver, where carbohydrate seems to be just another word for sin.

This chef knows how to apply new textures to a dish and make it taste great. His confit of albacore tuna ($13), fabulously silky on its own, ends up taking a back seat to "egg" (separated into small, slightly puffed squares of whites and yolk) and to-die-for "crispy bits" (brioche crumbs and crackling soaked in smoked lard).

Scallop crudo ($17) is a lovely ceviche, thinly sliced and tossed with crunchy green apple and chives. But the side dish - a sweetbread and foie gras spring roll - tries too hard. The organ meats are overcooked, rubbery and cry out for a softer cradle.

Crispy mushroom turnover ($22), stuffed with broccoli, mushrooms, pecorino and truffle fondue, tastes heavy and greasy when compared with all the other fresh flavours on the menu.

But then we slide into dessert - a soothing trifle ($10) layered with dense pound cake, custard and ripe peaches, and a bubble tea-like limonade ($9) that pops with blueberry sorbet, tapioca pearls and mint granita - and remember that one must slip up occasionally in the quest for perfection. 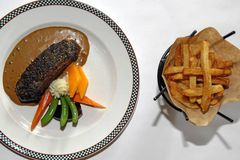 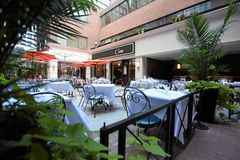 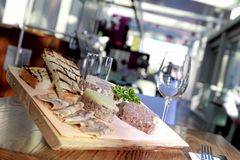