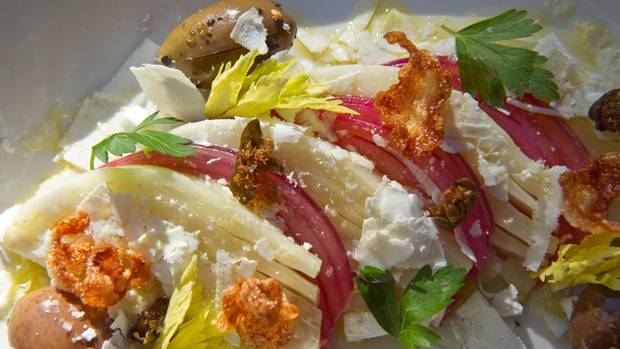 Galit Rodan for The Globe and Mail
The plates at Bar Buca can take explaining.
You might want to know, for instance, that the spread on the singular sardella Calabrese toasts, the ones that the handsome waiter in the leather apron drops off casually with the Barbaresco, as if they’re no biggie really, begins with a savory baseline paste of fermented local smelts and a spicy, summery chile and fennel seed preserve. That fat, gold-flecked and unspeakably delicious fog on top? That’s burrata cheese, dusted with fennel pollen.
The dip with the artichokes on Bar Buca’s two-tiered, $25 showstopper of a gran fritto misto platter isn’t your usual flavoured mayonnaise; it is zabaglione – egg yolks whipped over heat with wine and olive oil and bergamot orange juice.
You might want to know that the sweet brownish paste in the glass jars on the tables in the mornings is called cremina. It is sugar stirred through with espresso froth. No, you are not meant to mainline it.
The crisp, soft bread enveloping Bar Buca’s mascarpone and porchetta sandwich – Prego, signore! – is called schiacchiata. It is what focaccia tastes like when it doesn’t come from a plastic bag.
You might want to know all that, or you might choose instead to submit to the magic of the place without too many questions. Bar Buca is a humble neighbourhood snack bar, after all – one that opens for coffee and pastries first thing each morning and closes daily at 2 a.m. 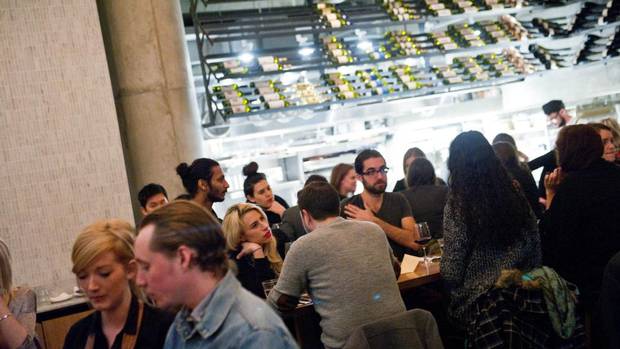 Galit Rodan for The Globe and Mail
If Italy’s aperitivo tradition is any guide, Bar Buca is meant for a couple of pre-dinner bites and a vermouth or a glass of Prosecco, and then you’re on your way.
But to treat it as a stopover only is to miss some of the magnificence of what they do here. At just two months old, Bar Buca is already one of Toronto’s most extraordinary places to eat and drink.
The 38-seat room, a spinoff of King West’s Buca restaurant, is a big part of that. Two storeys high and set on the ground floor of a condo on Portland Street, the space has been rendered from glass, raw concrete and marble, North Italian industrial, but somehow with a homey vibe. The tables are bar tables, high and tight. The kitchen is open. The dolci are kept up front at the bar; if you want to know what baci di dama are, they tell you to go take a look.
The crowd: youngish and moneyed, downtown creatives in tailored gingham shirts and impractical heels and the occasional cashmere toque. And the room draws the food-obsessed. Vikram Vij, the groundbreaking Indian chef from Vancouver, sat quietly at the bar by the kitchen one morning recently. A couple of weeks ago on Twitter, Giles Coren, the restaurant critic from The Times, in London, called Bar Buca’s tripe and quail egg sandwich “THE TASTIEST thing I've ever eaten.” 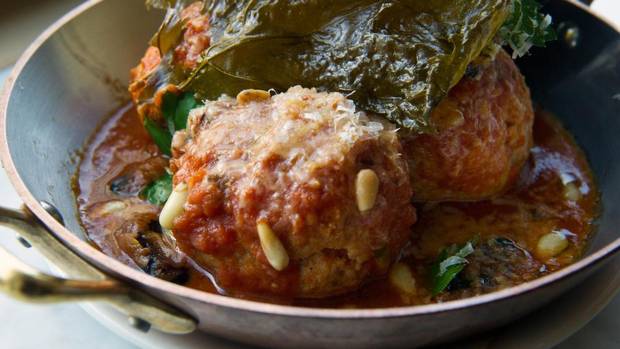 Galit Rodan for The Globe and Mail
For those who know Rob Gentile’s cooking, none of this is a surprise. Even as Mr. Gentile built the nearly five-year-old Buca into the city’s best Italian restaurant, the chef spent months traveling around Italy on more than a dozen trips, returning home with ideas and inspiration, with packets full of seeds for strange herbs, lettuces and vegetables (Cookstown Greens, north of Toronto, custom grows a dozen varieties for him) and with dishes that just don’t exist anywhere else in North America. He’s been saving many of them up for now.
The best time to experience Bar Buca as a newbie is straight after work, before the crowds (there are no reservations; it’s a snack bar, remember). Go alone if you must (you will meet people). A table of four is ideal.
Order the assaggini – an assortment of little bites that are meant to be eaten with drinks. There are the olive oil-soaked, salt and rosemary-flecked bread knots called nodini, and bruscetta topped with beech mushrooms, cured duck yolk and black truffles.
There’s a panino bagnato, a little sandwich, stacked with the strangest, tastiest meat you’re likely to encounter this year: cow’s stomach (the cow’s fourth stomach, specifically) stewed in tomato sauce until it is fall-apart tender and sweet and succulent, a gutsy move, as a friend of mine put it, slathered with herb dressing and chile paste.
There’s a skillet bun from Bologna, and pork cheek dressed with chile and lemon. You should be on your second negroni and breathless by the time that’s done.
Have that fritto misto assortment. It is hard to say if its oozy saffron, prosciutto and mozzarella arancino – a ball of fried risotto, roughly – is that platter’s star, or if it’s the battered rock shrimp, as all-consuming and ephemeral as a slow kiss on a steamy beach. 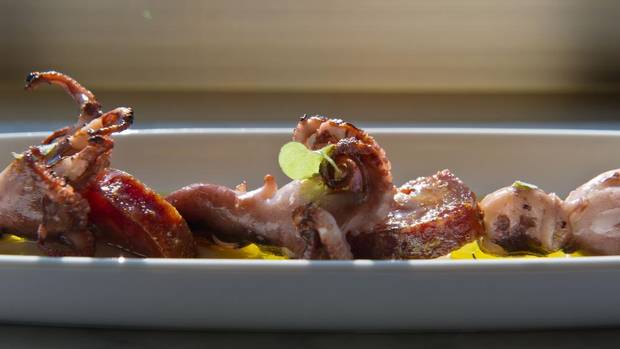 Galit Rodan for The Globe and Mail
The salads here pack grown-up flavours. The Roman dandelion number called cicoria tempers the greens’ bracing bitter with a creamy, complex dressing and tart-sweet blood orange segments. For another salad, raw artichoke slices are softened in citric acid, then tossed with buffalo yogurt, mustard oil, and just a whisper of the cured fish roe called bottarga.
The meatballs are made from goat’s meat and ricotta. Their sauce is a smooth tomato puree, but anchored with pine nuts that add a toasty, earthy layer, and grapes that have been slightly dehydrated, so they taste fresh still, but explode with flavour. (You will wonder why you’ve never before tasted a sauce like this.)
Have the ammazza fegato, also. That’s a thin, Tuscan pork sausage made from offal, served with crusty bread in a shallow dish of broth with kale and farro, wild porcini mushrooms and a poached egg. (The seasoning here is consistently aggressive; the first time I tried the ammazza fegato, there was too much salt. It was still worth eating.)
The skewers, called spiedini, are excellent in many cases. The baby octopus and soppressata version, which comes set over sublimely creamy potato puree, is perhaps the most accessible. The ewe’s meat and lemon spiedini is also crazy tasty, even if the menu’s specificity might strike some customers as odd. (It is not lamb’s meat. It is the meat from female sheep of at least one year old, because that’s the way it’s done in Tuscany, Mr. Gentile said.)
The stigghiole, which the chef first discovered at a tiny cart under a bridge in Palermo, is a whole green onion, wrapped with the web of gamey caul fat that’s taken from around a lamb’s kidney, which is then wrapped in lamb’s intestine and grilled. You eat it soused with lemon. I love that Bar Buca serves it, but never need to eat another one again. 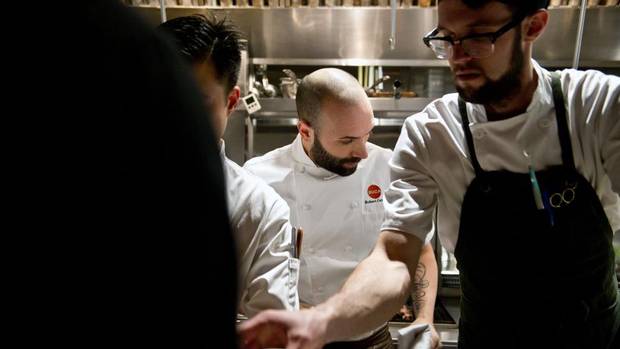 Galit Rodan for The Globe and Mail
The wine service here is superb. The list is packed with treasures, affordable and not.
The weekend brunch is to my mind the city’s best at the moment (can’t misses: the duck egg omelette with rock shrimp; the eggs with burrata; the semolina pancakes flavoured with orange peel and ricotta, like cannoli, and sopped in grappa-spiked maple syrup).
The pasticceria, made by pastry chef Cora James, are exquisite, very nearly as good, in many cases, as the ones at nearby Forno Cultura. You can ask what they have and walk to the bar to see them if you have to. Or you can just order the full assortment for $12.
You should do that. They’re pastries.
Pastries take no explaining at all. 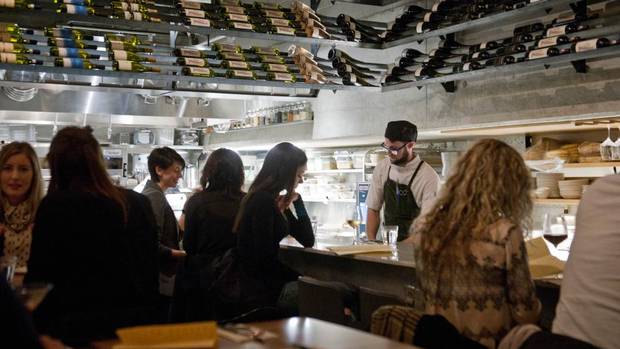 Cuisine: Italian
Atmosphere: A busy sandwich, snacks and aperitivo bar from one of Milan’s more fashionable neighbourhoods, shipped intact to Portland and King.
Wine and drinks: Superb Italian wine list with 17 choices by the 2.5 or 5 oz glass; a good grappa and spirits selection, good cocktails (try the barbabuca), plenty of non-alcoholic options. Excellent, out-of-the-ordinary coffees.
Best bets: For evenings, the assaggini and fritto misto platters, a couple of salads, a mortadella sandwich, goat meatballs, ammazza fegato, polipo spiedini, pasticceria assortment. At brunch, a couple of egg dishes, a porchetta sandwich, the crespelle and migliaccio.
Prices: Small plates, $3 to $14.
NB: No reservations; free snacks with each drink from 4 to 7 p.m daily.
Single Page
1 2 3Next