But you knew all that already. What people really want to know is whether Bar Raval is any good.

Bar Raval: Have a look at the most beautiful bar in Toronto

The answer is yes, absolutely, emphatically. Bar Raval is a Basque pintxos bar that just happens to have landed on College Street. It makes few concessions to the way things are usually done here. That's only the beginning of what makes an hour or two spent in that space such a magical undertaking, whether first thing in the morning for a quiet coffee and Basque-style cheesecake, or far too late at night.

As much as Bar Raval is a bar and a kitchen it is also a wake-up call to the city: Why can't drinks and snacks and the environments where we consume them always be this sublime?

Mr. van Gameren pledged as he was building the place that "Bar Raval will be as much an art piece as a restaurant." Chortle if you have to. With the designers Pooya Baktash and Alex Josephson, of Toronto-based Partisans, he has succeeded in making Bar Raval just that. Eyes turn up toward the ceiling when people arrive here. It's ringed in that oiled mahogany: great polished arcs of it that swoop and furl down around the windows and curve almost organically into a bar top, that seem to absorb and then retransmit the warm glow of shifting light. This is how ambition looks.

The room's official capacity is 40 people. It's often full or close to it. (There will be room for 50 more on the wraparound patio come summer.) After dark it's a mosh of chattering patrons, a racket of deep bass and laughter, serviced from the bar and by hard-working floor staff. "This is not a place for claustrophobics," a friend shouted over the din one night. It's a hell of a lot of fun.

The first time I ate there some of the first food to arrive was a tin of the house-smoked mackerel. It came with a bowl of kettle-style potato chips and a bottle of peppery aperitivo sauce made with vermouth; you spear a piece of the fish with a toothpick and put it on a chip and then souse it with sauce, the server explained.

The fish was mild and buttery: seashore smoke and firm, cold-water fat on the crunch of fried potato, with zip from the sauce bottle. It was obnoxiously delicious. The tinned razor clams are just as good (though be warned, they'll set you back $14), and the mussels are extraordinary, about as close as you'll get in this city to a picnic on the Galician coast.

Mr. van Gameren also brings in top-quality cockles, clams, stuffed baby squid, scallops and anchovies from Spain. They cost a small fortune: A half-tin of cockles runs $35, and you may be tempted to order the other half once you've finished. Their taste is intoxicating; it's the taste of small, tender clams, but concentrated somehow, with layer after layer of subtle minerality and delicate seashore twang. (As for the Spanish tinned anchovies, I didn't understand them. They're a big deal in Spain, so I'll happily defer here, but they tasted too much to me like everyday salt-packed ones to justify their $29 price.)

You can snack and drink cheaply here: The pilsner is excellent and goes for $4 a glass; the very good pan con tomate – grilled sourdough smeared with super-ripe tomato pulp, Maldon salt and olive oil – goes for $3.50 for two. Still, it is dangerous, a menu like Bar Raval's.

The menu is divided into cured meats (embutidos), cheeses, Spanish hams, tinned seafood, tapas, pintxos (foods that are speared with toothpicks, roughly), bocadillos (those are little sandwiches), and fried and grilled foods. There are more than 50 small dishes, most available from 8 a.m. until 2 a.m. every day.

If you turn up in the morning you might also find an additional array of savoury snacks on the bar: small, fennel-dusted doughnuts filled with whipped sheep's milk cheese; croissants stuffed with ham or smoked salt cod; potato and egg tortilla Espanola towers topped with fire-roasted piquillo peppers.

The croquetas are deep-fried little depth charges made from béchamel and chopped Spanish ham. They are a great beginning. The talos con chistorra are sour-savoury fermented pork sausages that come grilled with guindilla peppers, rolled up into house (Mexican-style) corn tortillas. Have those too. Have a plate of the fresh white anchovies called boquerones, and the sliced octopus that comes glistening with olive oil, served on rounds of baguette.

The morcilla and egg pintxo is one of Bar Raval's more substantial bites: It's a round of warm, clove-spiced blood sausage on bread, topped with a fried quail egg and a drizzle of parsley oil. You eat with your hands or with toothpicks. You drink. You bump into old friends and find yourself making new ones. Time vanishes quickly here.

Mr. van Gameren has put chefs de cuisine Ryan Baddeley and Keenan McVey in charge of Bar Raval's kitchen. He credits them with much of the menu development. Their grilled B.C. shrimp were bursting with roe when I had them. You shouldn't miss these if they're still available. The pig cheeks in cider are soft, slow-braised, intense melting porkiness glazed with the taste of sweet autumn apples, served with smoked chorizo rounds. You need to try the tiny fresh scallops in sea urchin sauce, too.

As with everything I sampled here over three visits, those scallops are a masterpiece of sourcing and judgment. (Rather, as with nearly everything: The smoked salt cod on a croissant one morning had turned; it tasted like green bin. Of the more than 30 dishes I ate at Bar Raval, this was the single one that wasn't right.)

That Catalan cheesecake is made from little more than cream cheese, eggs and sugar, baked super-hot so the outside crusts. The texture is more like cheese custard than typical cheesecake. If you're into this sort of thing it just may change your life.

But the best thing to do is to go and explore, whether for 30 minutes or several hours. It's a bar, remember. (Remember that, too, when you question why only three stars. It's not intended to be a four-star place.) You don't have to commit. Go in the morning or early afternoon if you don't like crowds and loud music. Go any time after 4 p.m. if you do.

If you're at all like I am you'll find yourself wondering why every neighbourhood in Toronto doesn't have a couple of places just like this. And then you'll come to and order another bite and allow yourself to be grateful. With even one Bar Raval the city's food and drinks culture is infinitely better off. 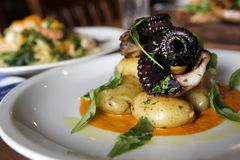 Top 10 new Toronto restaurants of 2014
December 12, 2014
Follow Chris Nuttall-Smith on Twitter @cnutsmith
Report an error Editorial code of conduct
Due to technical reasons, we have temporarily removed commenting from our articles. We hope to have this fixed soon. Thank you for your patience. If you are looking to give feedback on our new site, please send it along to feedback@globeandmail.com. If you want to write a letter to the editor, please forward to letters@globeandmail.com.
Comments