Even those with the slightest interest in beer know that Mill Street Brewery has been growing its sudsy empire for quite some time now. Now owned by Labatt Breweries of Canada, the brewery's most popular beers, such as Original Organic Lager or Cobblestone Stout, are available across the country.

While it is primarily known for its beer lineup, Mill Street also has a handful of brewpub locations in Toronto, Ottawa and St. John's. This past fall, Calgary was the newest city to join the family.

The old house that the brewpub calls home oozes character. The Costigan House is one of the only century-old homes left on the busy avenue and it sticks out in a charming way. In its past life, it was a nightclub (Tequila's) and, more famously, a popular live music venue called Republik. Everyone from local breakout star Jocelyn Alice to Bif Naked and Lady Gaga have performed here over the years. If only these walls could talk.

But if they could, they might whisper in dismay about the atmosphere that's been imposed on them.

Seemingly hastily designed, the soul of the space (the former lower-level concert area) has been sucked out and replaced with the pub's bar area. Surrounding the many high-top tables and stools are stainless-steel tanks for brewing beer – a necessity of a brewpub, I realize, an unnecessarily open kitchen visible through large windows, plenty of televisions and substantial fluorescent lighting that would wreck a first date.

The upstairs dining area doesn't fare much better, with a dark blue coat of paint and a few black and white photographs hung throughout. Aside from the chatter of other tables and clanking of pints of beer, the establishment feels terribly soulless for a building with so much history. It's a shame.

With the unpleasantries out of the way, let's move along to greener pastures.

The beer company certainly made the right move enlisting Creative Restaurants Group to be its local operating partner. The group owns a handful of local spots including Bonterra, Posto, Cibo and Scopa, all of which are reliably delicious Italian eateries with pleasant service.

As such, in my experiences, the pub is full of friendly bartenders and servers that are happy to help you find a beer to your tastes and explain the food menu with ease. Though the Mill Street Brewery standards are all on tap, the pub does have its own resident brewer who comes up with some refreshing brews that are worth opting for, such as the slightly bitter Digger's Dunkel or the undeniably refreshing Costigan Kolsch.

As for the food? Well, it's good. Actually, it's surprisingly good.

Creative Restaurants executive chef Glen Manzer has come up with a creative pub menu that is anything but basic. For example, his indulgent take on calamari arrives warm and tender in a rich lobster cream sauce with chunks of roasted squash, crispy wild rice and garlic breadcrumbs.

The venison reuben is a welcome spin on the ordinary with a portion of shaved venison meat fit for a giant sandwiched between marble rye with sauerkraut, gooey cheese and aioli. It's a monster of a sandwich that comes with a bag of crispy fries on the side. If one did not have an equally monstrous appetite, it could be easily split by two people.

Since comfort food is king in the wintertime, mac and cheese is a fitting choice. Though it's a little too steep in its price ($23), the mac and cheese topped with braised short rib ticked all of the boxes of what a fulfilling and appropriately cheesy pasta dish should be.

You'll need some of the perogies on your table, too, especially since the classic dish is rarely seen on a contemporary restaurant menu here in Calgary. It's filled with whipped potatoes and gouda cheese and served with caramelized onions, cabbage, lardons, garlic sausage and sour cream. A Ukrainian Baba would approve.

I am not normally a fan of rice pudding, but I'm always ready to be proven wrong.

The pub's warming wild rice pudding with a sweet saskatoon compote and finished in a couple of healthy spoonfuls of beer caramel sauce was another unexpectedly thoughtful dish, especially on a cold January night.

This Mill Street brewpub is a perfect example of how a restaurant's design can affect a dining (or drinking) experience. Food is only one half of the equation at best. 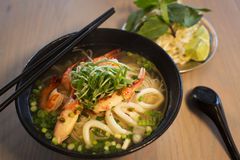 Review
Food takes a back seat to beer at Edmonton’s Malt and Mortar
December 30, 2016 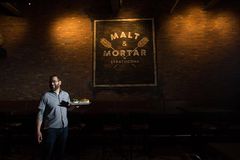