Jamjar Folk Lebanese Food is a sweet little restaurant on Commercial Drive decorated in the increasingly familiar rustic-modern Remodelista style – white subway tiles, reclaimed wood, antique glass windows and bare-bulb light pendants wrapped in their own industrial cords. The design, much like the food, will likely a) charm diners who don't get out of the house much, or b) elicit yawns from tastemakers hip to the latest trends.

Once seated, which can sometimes involve a lengthy wait (no reservations for parties smaller than six) and usually involves dining with strangers (most tables are communal), the eyes are immediately drawn to the long back wall covered in clusters of wooden crates.

The DIY shelves are filled with liquor bottles, wine glasses and reusable mason jars that can be topped with house-made hummus and other dips to buy and take home. Next to the front window, two bestselling cookbooks written by London-based restaurateurs are proudly displayed: Jerusalem (Yotam Ottolenghi and Sami Tamimi) and Comptoir Libanais (Tony Kitous).

The cookbooks, and the growing popularity of Middle Eastern cuisine they represent, are both a boon and a hitch for this casual restaurant owned by chef Bakhos Mjalleh and manager Fadi Eid, both immigrants from Lebanon and long-time hospitality professionals.

On one hand, the books are emblematic of just how popular the once woefully under-rated Levantine cuisine in all its fresh, garlicky, lemony, vegetable-forward glory, has become.

On the other hand, now that so many people have access to Mr. Ottolenghi's foolproof recipes, our tastes are much more discerning.

Take Jamjar's original hummus. This basic creamed-chickpea staple should be the kitchen's calling card. But dominated, as it is, with sesame-seed tahini while lacking in gutsy garlic and zesty lemon juice, this hummus is simply pasty, beige and boring. Forget the far superior versions locally available at Nuba (where Mr. Mjalleh worked), Tamam or Café Medina. Armed with freshly reconstituted chickpeas, a decent-quality tahini, a food processor and an ounce of imagination – perhaps a splash of lemon oil, a more generous sprinkling of za'tar or just a simple parsley garnish – even the most ham-fisted cook could make an infinitely more appealing dip.

The other cold mezze in Taste of Lebanon (a three-course sampling platter for two people priced at $38) were better. Mohammara, a red pepper and walnut dip, had roasted depth and chili-spiked vibrancy. Spinach dip had a good balance of sesame. Baba ghanouj was a chunky blend of smoky eggplants, fresh mint, tomatoes and onions.

But a hot mezze platter was extremely disappointing. Are the cubed potatoes in batata harra really meant to be this greasy and the burnt garlic so acrid? Is the outer shell on the deep-fried falafel always this hard and the interior so bland?

Was the fattoush salad, drowned in sweet vinaigrette, tossed much earlier in the evening? Why else would the dominant green lettuce look so wilted and the pita crisps feel so soft?

Lamb kafta, one of several main course options, is a recent substitute for stewed lamb shank. The owners might want to reconsider the switch, because I can't imagine any dish tasting worse than this industrial grey, obviously frozen minced meat with the fibrous texture of a sponge. The fried patties, without a lick of char, were unceremoniously plopped atop swollen grains of overcooked brown rice and smothered in a plain tomato, onion and green-pepper stew.

We ordered additional servings of halloumi cheese and olives. The former was barely softened with a greasy sear and served with pale, tasteless tomatoes; the latter (jarred in Lebanon) were oddly bitter.

I didn't want to go back to Jamjar, but I had to. I couldn't believe that this was the restaurant everybody's been raving about. The second dinner was much better, perhaps because both owners were working that night (they weren't the first time I visited).

The fattoush was much brighter and tart with lemon and sumac, though still dominated by lettuce leaf salad and those limp field tomatoes likely trucked in from Mexico. (Hothouse tomatoes might be an option.)

The pita bread was crispier in the salad and served warm out of the saj oven with the mezze. (It was cold on the first visit.) The seasonal hummus, blended with olives and thyme, had a far meatier texture and bolder flavour than the original

This is the type of flavourful, gutsy home-style cooking I had imagined. It's not a restaurant I would go out of my way for, mind you, especially when consistency is not guaranteed.

But for nearby locals craving hearty, casual Lebananese food with a touch of cosmopolitanism, it could be appealing. Just don't expect to be blown away. 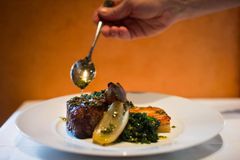 The five best Vancouver cafés in which to get toasted
March 6, 2015 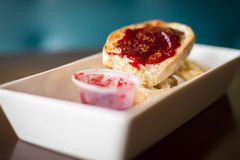 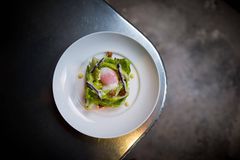