The severed sablefish head stares me down with empty eye sockets, its fleshy lips agape. The scaly skin, slathered in crimson adobo sauce, appears to have been singed by the crackling roast of dragon's breath.

I approach the beautiful-ugly appetizer tentatively, carving thick flakes of fatty collar from the neck ruff and wrapping them with tangy pickles and creamy aioli into warm, delicate, crispy-edged flour tortillas. Before long, baser primal instincts kick in. I dive down with my fingers, tearing apart the cheeks to find the juicy prized meat within. I slurp slippery bits off the bones, spit out a hard white marble that looks like an eye (but must be a jaw-bone joint ball) and resurface with smoky, deeply herbed chili sauce smeared all over my chin.

It's gloriously messy, sensuously simple and utterly delicious. I can't recall a fish dish that has ever given me more pleasure. Nor can I think of anything more perfect to eat on a sultry Saturday night in a palm-thatched restaurant with a warm breeze fluttering in from the sidewalk patio and a sweating glass of aphrodisiacal damiana-leaf-infused margarita at my side.

Welcome to Fayuca, where the wild west coast of Northern Baja crashes like breaking surf into British Columbia.

Even in Vancouver, where tacos have suddenly become the new sushi, Fayuca is not like any other Mexican restaurant. For some, the food might be hard to understand. I'm not just referring to hedonistic fish heads, a limited-quantity, off-menu item that is not for the faint of appetite. Many regular dishes – pork jowl tartlets wrapped in crispy skin, common breakfast enfrijoladas gussied up with dried-fish mahaca and draped in glossy black-bean fondant, grilled lingcod served with Mexican tabbouleh made from local barley – have daring edges and unexpected twists.

Although not common in these parts, Fayuca belongs to a new wave of modern Mexican cooking rolling across the United States. From Los Angeles (Ray Garcia's Broken Spanish) to Phoenix (Silvana Salcido Esparza's Barrio Café) and beyond, Mexican-American chefs are "reconnecting with their roots, fusing their European-leaning culinary training and bicultural backgrounds to craft an entirely new genre of cuisine" and push past the "taco-and-margaritas stereotype," as a great article in New Worlder recently described the trend.

Locally, it reminds me of what Jefferson Alvarez is doing with pan-Latin cuisine at Cacao in Kitsilano. Or what El Santo in New Westminster aspires to be, but hasn't quite achieved.

Interestingly, the godfather of this whole progressive Mexican culinaria is one of Fayuca's three owners. Jair Tellez was born in Tijuana and raised on both sides of the border. He trained and worked for many years at Restaurant Daniel in New York, before moving back to Mexico in 1999 and opening a farm-to-table restaurant in the Baja dessert, Laja, before farm-to-table cooking was even a thing.

One of Mexico's most famous chefs, Mr. Tellez now owns restaurants in Mexico City . He also co-owns Zorro Plateado in Playa del Carmen with nightclub impresario Alejandro Gamez (Fayuca's partner), who happens to be a very close childhood friend of Ernesto Gomez, the Vancouver partner, who grew up in Monterrey and worked in fine dining for many years before moving here and opening Nuba, a casual Lebanese chain.

But how does this menu play out? Intensely.

Think oxtail fideo, a very thin Mexican spaghetti, which is toasted dry in olive oil then simmered in the rich, fatty braise, folded with pinenut picada and hit with brightly acidic habanero sauce.

There is a lot of fish on the menu, not all of it local. They only serve whole fish when they can get it fresh, which isn't easy to find in Vancouver.

The kitchen does use many local ingredients, often in unexpected places. Chocolate-chile cake is presented at the table by pastry chef Ian Hayzelden, who is also the in-house forager who picked all the huckleberries, Indian plums, wild blackberries and blackcap raspberries that went into the dessert's jelly.

The only dish that disappointed was the pork shank confit. I knew it would be a big, messy, interactive dish served on the bone that would have to be shredded at the table. I was expecting something similar to my ecstatic tango with the sablefish head – a fatty, juicy hunk of fall-apart meat that would be worthy of a dry-cleaning bill. And I think the shanks usually do come that way. But they're not really cooked confit. They're more like carnitas, crisped hard and fast in boiling lard, which slowly cools as the submerged meat cooks over several hours.

It's a risky technique, easily susceptible to overcooking, which is what happened to our dud – a bland, dry, toughly congealed, hulking leg of pig on the bone. There was nothing sexy, let alone edible, about it.

Still, as with love, it's better to risk large and lose everything than be boring and settle for ordinary. Fayuca is anything but ordinary. 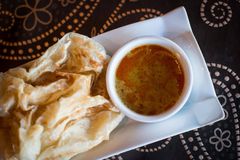 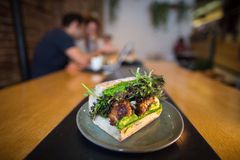 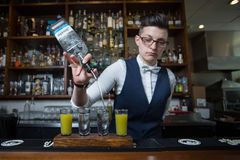