How so? First, because it's southern barbecue, one of the hardest cuisines to crank out consistently. The best barbecue joints down South aren't full-service restaurants with niceties such as reservations and predictable hours. They're roadside stands with outdoor pits that cook all night, open midmorning and close whenever the meat is sold out. It's first-come, first-served because smoked meat only holds for a few hours before collapsing into molten mush or seizing up like chewy cardboard.

Any barbecue restaurant striving for some semblance of regularity (without keeping the smoker burning around the clock) needs to devise crafty ways of keeping the meat hot and moist, or reviving it without overcooking and compensating with excessive sauce. This is really, really difficult to do. It's even tougher when you specialize in Central Texas-style barbecue, as Dixie's does, which eschews sticky sauces in favour of clean, simple, salt-and-pepper rubs. There is nothing to hide behind.

To make matters even more tricky, Dixie's decided to run with a wood-fired smoker, a customized Pitmaster that burns through about half a cord of alder, birch and maple every three weeks.

Now, barbecue isn't classic barbecue if the meat isn't slowly smoked over the indirect heat of low-burning hardwood. But not all smoke is created equal. Most barbecue joints in Vancouver rely on electric smokers supplemented with wood chips. (Memphis Blues is the only other barbecue restaurant using chopped logs.) Chips and pellets can still produce decent barbecue when combined with proper technique. But the substitute is somewhat akin to baking a chocolate cake with oil and tofu instead of butter and eggs – it will never taste as good.

So why don't more places use wood smokers? Well, it's not easy to get a permit. And it's an expensive process, especially if you have to hire a certified engineer, as Dixie's did, to ensure the proper hood venting, hermetical seal and side ventilation. But the main deterrent is because wood is just so darn labour intensive.

Beyond all the variables wood automatically adds to the mix (the weather, the humidity, the dryness of the logs), it also requires long hours and constant attention. At Dixie's, chef Jeff MacIntosh arrives at 8 a.m. to light up the smoker and is there all day to feed the fire and ensure the enclosed chamber maintains its optimal temperature. And that's just the rig, never mind the meat.

So, no, it wasn't easy. But it was well worth the effort because Dixie's BBQ, now blowing sweet smoke through the heart of Vancouver's Downtown Eastside, is performing small miracles and serving some of the best barbecue the city has ever tasted. From the juicy brisket and crispy pork ribs to the country-music-themed bathrooms, or the simple side dishes and unpretentious drinks, this charming Southern belle has the whole package nailed down pat.

Dixie's is owned by Christina Cottell and Shoel Davidson, the proprietors of Gringo, a cheap and cheerful Mexi-Cali dive bar, best known for its no-name beer and cocktails served in plastic sand buckets. Don't hold that against them.

With Texas folklore being so ripe for the picking, Dixie's could easily have veered into similar kitschy territory. Corrugated metal siding riddled with bullet holes, the suspended tailgate of an old Ford pickup and splashes of red-white-and-blue neon push the design tropes just far enough to keep the Lone Star state front and centre. But simple church pews and retro school chairs pull the garishness back, giving the rugged room a warm patina that doesn't feel glaringly out of place on this gritty stretch of Hastings Street.

A long wooden bar fitted with comfy swivel stools boasts four (no-name) beer taps, spiked ice tea, boozy lemonade and a long list of bourbons. Don't look for wine. (They don't serve any.) Don't be surprised if a working girl swaggers in, plunks her change on the bar and swiftly downs a shot. (Nobody bats an eye.) Don't worry if a friendly server asks your name. (She's not trying to pick you up; that's called down-home hospitality.)

Of course, the real magic happens in the back.

Here, as in Texas, beef brisket is king. Each roast, depending on the size, takes about seven hours from start to finish. When the internal temperature reaches 175 Fahrenheit, Mr. MacIntosh wraps them in butcher paper so the moisture is maintained. While the protein fibres keep loosening and relaxing, the smoke and aromatic vapours infuse the liquefying fat and gelatinizing collagen with beautiful flavour, leaving its mark with a thin, bright-red smoke ring below the blackened crust.

After resting for up to two hours, the briskets (still wrapped in paper) are transferred to an insulated container. The ideal time to dig in is between 7 and 8:30 p.m., when the fat and the protein are still conjoined in a jiggly meat pudding. If you go earlier in the night, the muscle fibres might still be a bit tense. After 9:30, the meat becomes so melty and the fibers so stretched the chef won't even serve it. Think of it like your favourite lycra-denim jeans – after they've been worn a few times, they no longer hold everything in.

Dixie's pork ribs are lightly glazed with peach and chipotle, which really captures the smoke, but isn't typical to Texas. They're drier and crispier than the web ribs commonly found in Vancouver, yet tender enough that they easily slip off the bone without falling apart in the hands. Oh, they're also hugely popular and often sell out early.

The links, hand-ground daily with a mix of pork butt and brisket trim, are lightly smoked, grilled to order and perfectly rested, which gives the meat an amazingly creamy texture inside their snappy casings.

Fried chicken, brined in herbed buttermilk for two days and cooked in a bubbly potato starch and cornmeal batter, is marshmallow tender. But make sure you order it in a bucket, which comes with three large pieces of deboned flattened leg and back attached. The pieces on the platter are smaller, overwhelmed by crispy batter and not nearly as juicy.

Pulled pork was the only meat that didn't sing for me. Perhaps there is good reason that this cut isn't common in Texas. Pulled pork takes much longer than brisket. At Dixie's, it isn't ready to portion until late at night, so the chef serves it the next day. Even though he pulls the fatty shoulder in thick strands (rather than shredding it into "cat food," as he puts it) and revives it gently in chicken stock and a lightly tangy barbecue sauce, the meat just isn't as succulent as it would be coming straight out of the smoker.

But who's going to quibble when they're busy licking their fingers and mopping up the smoky juices with soft white bread and tangy pickles? It may not be easy, but Dixie's BBQ does Texas proud. 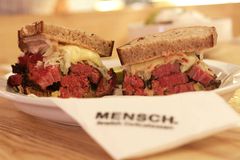 Review
Vancouver’s Nightingale is a hard miss for a Canadian culinary leader
September 9, 2016 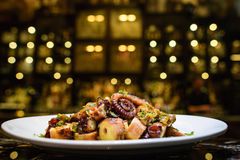 Review
Hao’s offers B.C. lots of lamb, in all of its obscure cuts and spicy preparations
September 2, 2016