Here are the reasons why you should not eat at Electric Mud BBQ, a new restaurant in Parkdale: Electric Mud BBQ does not take reservations. The doorman will tell you the wait for a table is 30 minutes, but 90 minutes is just as likely.

The décor is hillbilly keg party: concrete floors and chipboard walls covered in vintage hog feed advertisements and taxidermy. That taxidermy includes a striped bass wearing a rosary, a shark in a Civil War cap and a whitetail deer with a crucifix. There are also beer posters from the early '90s, featuring hungry-looking women of low moral fortitude, glistening-skinned in neon coloured bikinis and feathered hair.

If it's cold outside, you will freeze each time the door opens.

The bill comes when dessert is served. Though it is not inscribed with a smiley face and the phrase "Please Leave Now," that seems to be the intention; eat fast, there's a lineup; Electric Mud's management wants your seat back, stat.

And you cannot pay that bill with Visa, Amex, MasterCard or Interac – Electric Mud accepts cash only. There is a handy ATM outside the ladies washroom on the restaurant's second floor. By most accounts, it works sometimes.

And now, a couple of reasons why you should eat at Electric Mud BBQ: It can be a lot of fun to eat here. Also, the cooking is obscenely, shockingly good.

The cooking is a mix of not particularly authentic Southern U.S. barbecue and other deep-south staples. It's what happens when very good cooks (in this case, Black Hoof alum Colin Tooke and Ben Denham, his chef de cuisine) take on a couple of far-away cuisines without taking them, or themselves, too seriously.

The fried green tomatoes, a special a few weeks ago, came as fat, golden cubes – tart, juicy, viridescent tomato hunks enveloped with crunchy cornmeal batter. There were wild Caribbean shrimp on top, pickled with jalapenos and onion, coriander stems and rice vinegar. It tasted of Southern cooking, but also of Spadina Avenue Chinatown, of polyglot Toronto, exactly of now and here.

There was roasted cauliflower with mint leaves, almonds, and a creamy, smoked cauliflower sauce, cucina povera gone cosmopolitan, lit by the flash of a Miller High Life sign.

And duck breast, cured overnight like Black Forest ham, then smoked over apple and maple wood in the Southern Pride smoker, sliced into pieces as thick as axe handles. The duck was sauced with a brew of hoisin, fermented black beans, bourbon and honey, sided with vinegary, quick-pickled cucumber slices. The duck, like so much else here, was of mixed origins, part Mississippi, part Mekong Delta, a profoundly delicious dish.

Electric Mud is the second restaurant of Mr. Tooke and Ian McGrenaghan, the owner-chef and owner-manager, respectively, of Grand Electric, the bourbon and tacos joint around the corner on Queen Street West.

Electric Mud is miles better, because the place is its own thing: familiar, but in many ways original. (Grand Electric owes a massive debt of inspiration to Big Star, a hipster tacqueria in Chicago.) Also, the couple times that I ate there, Electric Mud was nowhere near as loud as Grand Electric is. Maybe Mr. Tooke and Mr. McGrenaghan couldn't afford more powerful speakers.

The shrimp and grits at Electric Mud have as much in common with Mexican culinary traditions as Low Country ones; Mr. Tooke enriches them with savoury, mushroom-like huitlacoche, a black fungus that grows on corn in damp climates. (It's sometimes called "Mexican truffles," a far better name than the also common "corn smut.")

The pork ribs are good, but perhaps the least interesting menu item, even covered as they are with peanuts and scallion. They're juicy, sticky and tender – though not enough to taste like classic Toronto braised pork ribs. And though they're smoky, they weren't nearly smoky enough for my taste when I had them.

Similarly, if a barbecue aficionado were to pull apart Electric Mud's pulled pork sandwich and taste the meat on its own, there would be much dismissive chortling. There's no real smoke ring on it, and not much of a bark, that woodsy, candy-crusted, crunchy-fatty shell that comes from long, slow cooking over smouldering hardwood. But as a whole – as a pile of juicy, peppery, delectably fatty meat mounded with cabbage slaw and scallions and Carolina-style sweet barbecue sauce between toasted white sandwich bread – that pulled pork sandwich is simply brilliant.

Fried chicken fanatics will love Electric Mud's New Orleans-inspired version, which comes moist and seasoned with chili and pepper; it's a refreshing departure from the sweeter, more common buttermilk kind. Have that chicken with the kernel-corn-studded hush puppies.

The catfish sandwich was also superb when I had it, its thick slabs of blackened fillet piled with softened yellow peppers.

The slaw, meantime, is good enough. It's cabbage slaw. The specials sheet's Sheila Salad, a buttermilk-washed jumble of tender shoots, greens, radishes and barbecued shallots, is a far better bet.

For dessert, there's very good mud pie (it tastes a lot like Coffee Crisp) and banana cream pie in mini Mason jars, as well as soft serve ice cream that was flavoured with subtly floral hibiscus and sour cream when I tried it. (You should not miss this.)

Finish them quickly, then get the hell out. 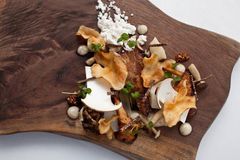 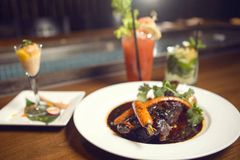 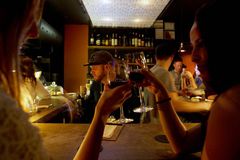 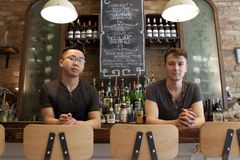 Review
Porzia: A Toronto restaurant that should be one of the greats
March 30, 2013 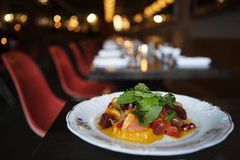 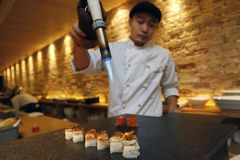 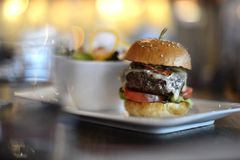