There are two things that everybody who knows about Joso's knows about Joso's. The first is that the family-run, high-end seafood spot, which has stood for the past 36 years near the corner of Avenue and Davenport roads, is a boob-themed restaurant.

The decor around Joso's two-storey space – the unchaste watercolours and oils; the signed Picasso and Dali dirties from the 1970s; the randy folk-art collages; the black and white photo of the statuesque, fishnet-wrapped blonde on the beach; the pendulous-in-another-life bronzes and the anatomically impossible ceramic and soapstone statues – well, you get the point, really.

If you're sensitive about these things, you'd best be sticking with Scaramouche, or Catch, on St. Clair West. (Both of which are excellent, it bears saying.)

The second thing that those in the know know is that Joso's is often mobbed with A-list musicians and Hollywood stars. Drake, the Toronto-raised hip-hop king and a Joso's regular, had the cover of Take Care shot at a corner table in the second-floor dining room. David Cronenberg courted Maria Bello here for her starring role in A History of Violence.

When Mick Jagger came for dinner a few weeks ago, he told Shirley Spralja, who owns the restaurant with her husband, Leo, that he hadn't initially been able to remember the name of the place from a previous visit, Shirley told me. And so Mr. Jagger described it to some local friends as "the restaurant with the really big boobs and the really good fish." They knew exactly what he meant.

Yet that last bit, about the really good fish, is Joso's third and much less well-known calling card. To my mind it is also the restaurant's most compelling – particularly now, as oyster houses, lobster shacks and upstart seafood restaurants proliferate around Toronto, a city that's often been written off as "not a seafood town." (It is quickly becoming one.)

Among the more promising of the newest entrants, Michael Steh, the talented chef who once helmed Reds, is preparing to open two much-anticipated seafood rooms in the Financial District, and one of the chefs behind the former Cowbell, in Parkdale, has plans to turn the location into a fish house called Geraldine.

They would be wise to get past the T and A – yes, there is plenty of A at Joso's, also – and check out the fish here. For seafood that's unfailingly fresh and cooked with a minimum of fuss or intervention, Joso's is perhaps the greatest non-sushi seafood spot in town.

The formula is simple. Most of the fish is served whole, head on, bones in. It is fish for fish-lovers, without cause to hide behind excessive flavourings or sauce.

The seasonings are in most cases limited to lemon juice, parsley, capers, salt, very good olive oil and a touch of garlic.

The fish is flame-grilled to just past medium, so that the skin chars in spots and the flesh turns firm and sweet and just perceptibly smoky.

The servers, young and conspicuously pretty, are also deeply professional. They handily debone the fish tableside, if you ask them. Ms. Spralja said she dreams of a day when customers do the job themselves, so that they can slow down and think about the food, and experience the fish in all of its glory. I admire that kind of ambition.

The whole sardines are everything a fish-lover could hope for in a plate of sardines. They are mildly sweet and clean-tasting and sizzly – sardines without the sardine pong.

A whole $83 halibut was similarly impressive: meaty, rich, and fresh-tasting enough that it might have been grilled over a fire on a rocky beach on the Atlantic coast.

The insalata di mare is one of the best I've had: oil-poached monkfish, grilled octopus and sweet shrimp tossed in oil and lemon, brightened with rosemary, bay leaves, red wine vinegar and capers.

The spaghettini Leonardo includes diced octopus and shrimp with capers, parsley, lemon, garlic and white wine, tossed with perfectly al dente pasta. It is a superlative plate of noodles.

Not all of the cooking is quite so rustic. The calamari are blond, crisp, dazzlingly tender and greaseless, pesce fritti as you almost never find them, a triumph of timing and temperature.

The risotto nero, a creamy, intensely glossy, deep black pool of rice and squid, is a product not merely of ingredients but also of labour and tradition.

Leo Spralja's parents, Joso and Angiolina, founded the restaurant in 1977. They were immigrants from Croatia; Angiolina brought most of the recipes with her.

That risotto nero is a classic, common along the Dalmatian coast, where it is known as Crni rižot, as well as in Venice and elsewhere in the region. (The Tuscans make a similar dish, adding fresh beet leaves to the mix.)

It quickly became one of Joso's signature dishes. Angiolina died last fall, and Joso has retired to Croatia. And so now Leo is in charge of the kitchen, supervising the cooks as they stir the rice with broth and red wine to shake off its starch. Every Wednesday after service, Leo pulls the ink sacs from whole cuttlefish to make a week's worth of the finishing sauce that turns the dish so strikingly black, that makes it taste as real as a maritime fog. That risotto nero is an extraordinary dish.

The sides are simple. There are wedges of red beets, or steamed chard (under-seasoned when I had it), or basmati rice or a zucchini and tomatoes number that's similar to ratatouille. The vegetables cost $9, the starches $6, which is exorbitant when you see them. If you're eating here, you don't care that the sides are priced exorbitantly. You also don't care that a negroni costs $18. There is good tiramisu for dessert, as well as Croatian stuffed crepes, and orange sorbet that comes, givré-style, in a frozen orange shell. Its flavour is reminiscent of Pez orange candy, but is nonetheless refreshing. And anyway, you don't come here for the sorbet. You come for the boobs and the stars.

And for the fish, of course. 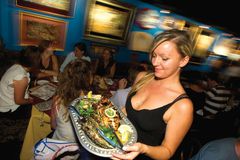 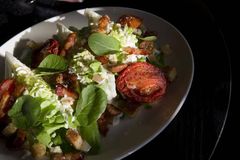 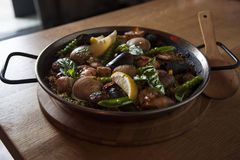 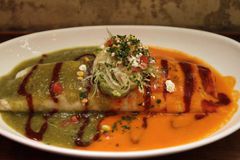 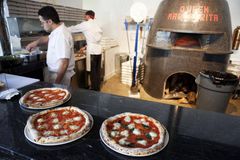