The staff T-shirts at Kanpai, a cool new Taiwanese snack bar and cocktails lounge at Parliament and Carlton Streets, take a bit of puzzling. "New York, Paris, Tokyo, Cabbagetown, Taipei," they read, in bold white-on-black lettering. Is the place the latest satellite of an international restaurant chain? (Nope, Kanpai is a one-off.) Or are its owners, a 27-year-old chef from Taipei and a local hotel industry veteran, just slightly more aspirational than the norm?

"We wanted to send a message to the neighbourhood," front-of-house boss and co-owner Trevor Lui explained on the phone this week. "Cabbagetown is just as cool as New York, Paris, Tokyo and Taipei," he said. Which is absurd, of course, unless you happen to drink the local formaldehyde.

Cabbagetown is the cosseted old crank of downtown Toronto neighbourhoods: rich, white, crusty and heritage-obsessive. Cabbagetown is urban, sure, but with pitchforks at its borders for everything that doesn't fit.

Take a closer look at Kanpai's food and atmosphere

And so those T-shirts notwithstanding, the opening of Kanpai, here, comes as a surprise, and also as blessed relief. The room is young and fun, with rough wood panelling, a prominent bar (the handles on the beer taps are made from Taiwanese chef knives), windows that open out to the sidewalk, and boxy, wooden stools that lend the place an izakaya feel.

There are other, un-stodgy spots in the neighbourhood, to be certain: F'Amelia, the House on Parliament and – though it fills far more with Ryerson students and Japanese kids than Cabbagetowners – Zakkushi among them. But Kanpai is the first that's both up-to-the-moment on-trend and accessible (it's often filled with local families). It's the first spot in the neighbourhood with an at all modern cocktails menu (the Ooh Long Island Iced Tea is pretty good). Kanpai has two "5 dolla make you holla" hours every evening. Shots of Jameson go for $3, all day, every day.

Where Kanpai really stands out is with its choice of cuisines. Taiwanese, which mines and refines influences from around mainland China, Japan and its Southeast Asian neighbours, is still rare this close to downtown. Kanpai's chef, named Ike Huang, moved to Canada from Taipei six years ago, working the line in a Cantonese kitchen in British Columbia before moving east. He and Mr. Lui, whose own family ran a Cantonese-Canadian spot in Rexdale through the 1970s and '80s, modelled their menu on Taiwanese night market cooking: on the fatty, four-bite bao, and popcorn chicken and wok-fried snacks that are meant to fuel drinking and dancing jags.

This being 2015, they've wrapped it in a fun (and also: grasping, derivative, but whatever) hip-hop vibe. The menu is rich with old-school rap references. The fried chicken skins dish is called "player hater," after tune from the Notorious B.I.G.; there is also a "piggie smalls" deep-fried pork belly dish; a fresh soybean appetizer named "edamame said knock you out;" and a squid dish named "a tribe called hakka," which, we get it, haha.

The best way to start is with the snacks. Begin with a little dish of "funny fish," as Kanpai's menu calls them: deep-fried anchovies that glitter gold and silver and crunch like pretzels, tossed with roasted peanuts. The " 'oh'-ree-ental-mix" is also excellent, if more assertive. It's composed of hard-fried red chilies, mostly (they're not particularly spicy, strangely; just flavourful), with crunchy soybeans. Both of these are designed to encourage drinking, and they do.

Kanpai's "Taiwanese antipasto" is more refreshing: It's a dish of quick-pickled cucumber, daikon tossed with nori, and crunchy coins of pink-stained lotus root.

The pig's ears come thinly sliced, marinated in what tastes like rice wine and mild-mannered chili oil. They crunch, but softly. They're gelid-cool and porky. These also encourage drinking. If you're put off by fried little fish and pig's ears, Kanpai serves excellent, intensely juicy "Taiwanese Fried Chicken," which is all but indistinguishable here from the North American stuff.

The steamed-bun sandwich called "das bao" was superb when I had it: the bread gleaming white and glossy and filled with fried chicken pieces, red cabbage and mayonnaise; the "o.g. bao," stuffed with pork, was flat-tasting by comparison.

("Original gangster" is the new "artisanal." To wit: Kanpai's menu goes on to describe that o.g. bao as a "sammie." Real gangsters lose limbs, and deservedly, for using words like that.)

Have the red rooster fried rice. Mr. Huang's greatest skill is as a wok chef, and that rice is perhaps his finest accomplishment. It's simple stuff: pork, vegetables and Szechuan pepper sauce, with earthy punch from fermented black beans. But the sauce is brightly floral and savoury and the grains are crisped from oil and heat so each bite also tastes of toasted rice and green onions, and the pork fat and those peppercorns seem to buzz in the background, and your mouth jolts wide awake. The wok dish called "firebird" is a play on chili chicken, with hunks of white onion that frazzle to sweet and smoky-dark.

Kanpei's kitchen still needs to sharpen its game on a few fronts. There's a weird, shrimp and pomelo salad flavoured with what tastes like orange blossom water, and which was served on depressed-looking arugula; this does not belong here. The deep-fried squid rings were too chewy when I had them, as was the deep-fried pork belly. Texture's a fixation in Taiwanese cooking. Bouncy-chewy, called QQ, is prized in many dishes; Taiwanese omelettes are firmed up with the addition of sweet potato starch. But the texture of that pork and that squid, wasn't QQ. It was just old-fashioned chew.

The supposedly "magic mushrooms" aren't. The edamame come dressed in a delicious soy and butter concoction, but the beans themselves were dry and tough; they did not knock me out. The service is consistently friendly, but is also often amateur. You may well have to fend off dishes you never ordered. I had to ask our server to wipe the gobs of sauce and savoury shrapnel from our table before setting down desserts one night.

And I'd like to see Mr. Huang and Mr. Lui pander just a little less to the caricature of Cabbagetown. (Fine, I admit it, the neighbourhood isn't entirely bad.)

This is my greatest issue with Kanpai: Its menu is so safe that it too often feels generic, too much like Canadian-Chinese, instead of something of its own. Why not serve oyster omelettes, or even shaved ice with fruit and tapioca? Why not go ahead and "smother" the Taiwanese fried chicken in Taiwanese spices, as the menu says the kitchen does?

And if you're going to name a third of your menu items after the Notorious B.I.G. and A Tribe Called Quest tunes, you need to own that, or it comes off too much like posing.

Kanpai's Asian mash-ups meets hip-hop theme has scores of antecedents, from the New York chef and gadabout (and author, and Fresh Off The Boat co-creator) Eddie Huang's short-lived Xiao Ye, to Oddseoul, Hanmoto, Patois and DaiLo here in town. When I've been there, Kanpai's soundtrack wasn't old-school hip hop, but the likes of Kris Kross and Another Bad Creation: grating, 1990s kiddie rap.

Desserts are superb. Get the "wow bao," which is a roll of sweet, milky, brioche-like bread that comes deep-fried, so that its crust turns as sticky as caramel. The fried bread comes with dishes of sweetened condensed milk and chili-kissed Nutella for dipping. Get that and get the "ping pong beignets" that combine sweet potato and purple yam into deliciously bouncy-chewy, sugar-rimed balls. 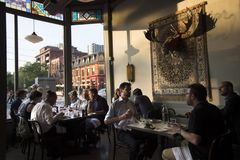 Review
Canoe: Canadiana restaurant is still cresting the waves
May 22, 2015 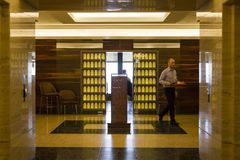