Mid-town Toronto is not kind to Cantonese kitchens. Lost in the middle-distance between downtown Chinatown and Markham, it is out-of-mind for the masses of Chinese diners who fill the dim sum parlours and marble-clad banquet halls father north and south. And the locals, bless them, can't be an easy sell. You try hawking sesame jellyfish and congee to a market that grew up on Yorkshire pudding and overcooked roast beef.

The hotelier and serial restaurateur Henry Wu learned this the hard way a few years ago when his superb Lai Toh Heen, with its $90 a person tasting menu, limped away from a prime location on Mount Pleasant Road. Cha Liu left the neighbourhood also, fleeing Yonge and Eglinton in 2011 for downtown. The somewhat less exalted Big Mouth Luck Dumpling House perseveres upstairs in Delisle Court at Yonge and Heath Street, but you get the sense that its better days are done.

Kwan Dimsum + Chinese Cuisine snuck onto this scene just before Christmas, quietly deconsecrating the oak-panelled lair that was until recently run by Didier Leroy, the tantrum-prone French chef.

The place is so far bucking the mid-town curse. It is busy, filled in the dinner hours with business diners and well-to-do families and flavour-intolerant young marrieds (overheard earlier this month: "There is no cumin or curry in any of this, right?"), and by day with lunching ladies and fans of fancy dim sum.

The space is modern and comfortable, with plenty of room between the tables. It suggests an elegant Hong Kong tea house, as if designed by an oolong-loving Dane.

Last Monday, an older Chinese couple grazed on turnip cakes and abalone-braised chicken feet at a table in the restaurant's front window, reading the day's Ming Pao. This was perhaps the last thing I ever expected to see at Yonge and St. Clair.

The cooking, executed by separate dim sum and evening crews, is a powerful draw. Kwan's owners scooped head evening chef Ronnie Lam from downtown's once-vaunted Lai Wah Heen, where he was second-in-command. (Lai Wah Heen was sold last year. It was the parent restaurant to that failed spot on Mount Pleasant, Lai Toh Heen.) Chef Lam's style blends a lot of east with just enough west, and a level of craftsmanship that isn't always easy to find.

It is worth ordering his sweet and sour pork, for instance, gwai lo bait at nearly any other restaurant. Here it's made with house-ground Chinese hawthorn fruit for floral, warm-spice sourness, instead of with gloopy orange sauce. This is sweet and sour pork as you've never experienced it, a doughy childhood friend suddenly lithe and gorgeous and available.

Mr. Lam's Peking duck is done Hong Kong style: the soy-burnished skin and the bits of meat that arrive with the dish's first wave are slightly less crisp than Beijingers do it, but far better seasoned. It's delicious, served with thick, moist house pancakes and a house-made hoisin that's more roundly flavoured than the typical bottled sauce.

The second wave is even better, with its meaty hunks of chopped duck seared with crisp noodles, vegetables, oyster sauce and soy. It's a fog of meat and juicy crunch and savoury, smoky wok hei that you scoop into iceberg lettuce leaves.

That duck costs $48 and serves two, at least. Between it and a plate of the smartly stir-fried Chinese broccoli and a couple of beers, I could leave Kwan an extremely happy man.

The e-fu noodles with crab are nicely made, the egg and wheat flour yi mein tender but springy and more or less greaseless, interleaved with Chinese chives and hunks of well-timed crab. Soups were a rare miss, properly glossy and viscous from cornstarch, but seriously under-flavoured; they tasted as if they'd come from a different place.

The daytime menu of dim sum is deftly executed and just fussy enough, miles better than most of what you'll find downtown, and at very least equal to much (but not all) of what Markham has to offer. And at least by fancy lunch standards, the place is cheap – try as I did to kill my table mates with food over two dim sum visits, I couldn't manage to spend more than $25 a head.

You should not miss the char siu pastries. They're two-bite wonders, whisper-light, lard-based packets that shatter into a hundred flaky, lacy, golden blonde layers, with sweet, peppery, savoury sauce and smoky little pork cubes at their core. I loved the "house special egg tarts," built on the same crust. They're as milky-custardy as they are eggy (if you're a dan tat traditionalist, you may want less of the former), 100 per cent delicious to my taste.

The dumplings are good if workmanlike; if you're a pleat-obsessive, you might leave disappointed. That said, they're seasoned perfectly, and juicy too.

The beef tendon is braised to timorous and beautifully flavoured. The chicken feet are foot-like and squishy. If you like feet I guess you'll like them. I'm a tendon man.

But so too are the "tiny bee" pastries, which are bee-shaped glutinous rice flour buns filled with house-ground almond paste. They're quickly deep fried so that their skins crunch like sugar-dipped doughnuts.

And you should get the sweet porcupine buns, which are shaped like, well you know, and filled with sweetened egg yolk custard. Those were almost as good as the dessert I had at dinner one night, a jiggly, two-tiered confection of coconut and red bean pudding topped with a thick, soft-pink pane of chrysanthemum jelly.

Hell, just order a bunch of sweets and a pot of the mild, unfermented green oolong tea, and forget for a moment that you're at Yonge and St. Clair.

There are worse ways to spend an hour or two. 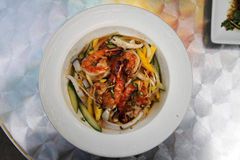 Review
Oddseoul: Flavours so explosive, the joint’s about to blow
February 15, 2013 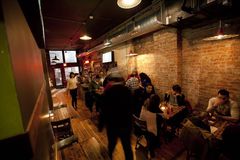